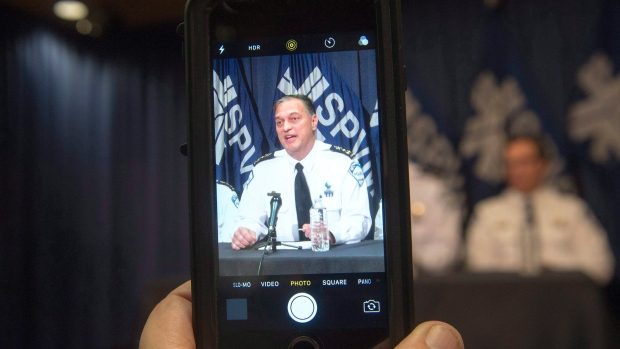 Montreal police Chief Philippe Pichet is recorded with a mobile device as he speaks to media about media surveillance at a news conference on Oct. 31 in Montreal. Photo by Canadian Press.
Previous story
Next story

The number of reporters who were subject to police surveillance in Quebec is growing.

Various media outlets reported Wednesday that provincial police were keeping track in 2013 of who their own journalists were speaking to. Some of the journalists reportedly targeted say police were attempting to figure out the source of a leak concerning a criminal investigation into a prominent labour leader.

In all, six reporters were targeted, including three from Radio−Canada and one each from La Presse and Le Journal de Montreal. The employer of the sixth has not been revealed.

Marie−Maude Denis, one of the six, said a source told her police obtained warrants that allowed them to compile a list of numbers from incoming and outgoing calls, although they did not listen to the content of the actual conversations.

"I’ve been receiving a lot of calls from people I spoke to and who are wondering if they were listened to," Denis, an investigative reporter at Radio−Canada, told the network. "It’s important to mention that the conversations weren’t listened to. Probably, they were looking for police officers who were possibly feeding us and they weren’t interested in other people.

"But this shakes everything we take for granted in a democracy when you’re a reporter. I am extremely disturbed by this."

The developments come a few days after it was revealed Montreal police obtained warrants to monitor the iPhone of La Presse columnist Patrick Lagace. The newspaper has sent a lawyer’s letter to the force, warning it against the use of data collected from Lagace’s phone.

The newspaper’s lawyer will be in court Friday to argue the data should be sealed.