How will Homer Simpson vote? 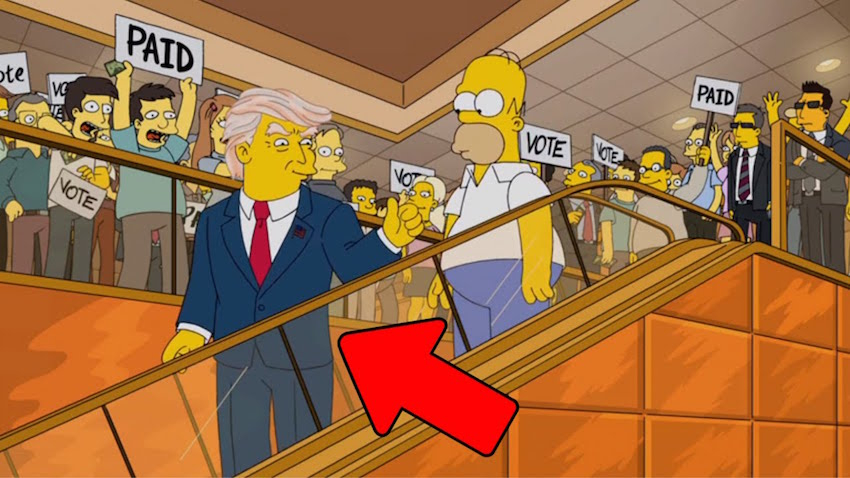 It may well come down to how Homer Simpson would vote.

That the crazy U.S. election may come down to that is a frightening, yet real, prospect. Despite being outspent, out-debated, and out-organized, Donald Trump has a real shot at becoming the 45th U.S. president.

It may be hard for Canadians (or most anyone on the planet) to fathom how this is happening, especially considering that Trump lacks the support of notable pillars of the Republican Party. Prominent party leaders have jumped ship, some of the most moral members of the Moral Majority refuse to place their faith in him, and several conservative newspapers are endorsing a Democrat for the first time ever.

It’s all a matter of perspective

A big reason why this is not necessarily a death knell for the 2016 Republican candidate has to do with the power of a person’s worldview in influencing behaviour. It turns out that how a person sees the world can be better than demographics--including party affiliation--in predicting how someone will vote. By tapping deeply into certain worldviews, Trump has been able to attract followers from all over the political spectrum.

A survey by the RAND Corporation during the Republican primary found that agreement with this statement: “people like me don't have any say about what the government does” trumped demographics such as gender, age, race/ethnicity, employment status, educational attainment and household income when it came to predicting who planned to vote for Trump.

Similarly, a national survey conducted by the University of Massachusetts Amherst, also during the primary, showed that “authoritarian attitudes and fear of terrorism” were the only two statistically significant predictors of Trump support.

Cognitive science has some insights into why this is so.

Noted cognitive linguist George Lakoff explains how Trump appeals to Americans who believe in “the Strict Father family” (as opposed to the Nurturant Parent family), with the father as the top authority. He says this is justified via a moral hierarchy where “those who have traditionally dominated should dominate.”

Lakoff also points to empirical research that reveals how conservatives tend to reason with direct causation (versus systemic causation), in large part due to the strict father model of punishing disobedience.

This can make simple measures such as building a wall, waterboarding terrorists or placing a high tariff on foreign goods seem like good ideas.

Springfield: too close to call

To bring this down to the mindset of individual voters, let’s visit a specific cross-section of Americans—those who reside in Homer Simpson’s hometown of Springfield—to see who is (likely) buying what Trump is selling.

After all, the Simpsons, in 2000, did predict a Trump presidency (to be followed by “America’s first straight female president”).

Springfield is up for grabs this election.

The town repeatedly reelects a Democratic mayor, yet has a powerful local Republican Party.

And this is an election that transcends party loyalties.

For example, it will be neighbourly evangelical Ned Flanders’s first time not voting Republican since Jimmy Carter in 1976. To him, Trump is too amoral and Hillary too pro-choice, so he voted early for Evan McMullin.

How will other Springfield residents cast their vote?

Some, of course, won’t be voting, either because they are too young (Lisa and Bart Simpson would clearly cancel each other out); too felonious (Sideshow Bob, Snake Jailbird); too non-American (Groundskeeper Willie); too blottoed (Otto Mann the bus driver, Barney Gumble); or too deceased (Fat Tony, unless his henchmen succeed in casting his vote from the grave) .

Ned Flanders isn’t the only one shunning the two major parties.

Disco Stu doesn’t want big government to cramp his style, so he’s voting for Gary Johnson. In this worst election ever, Comic Book Guy, plans to write in Radioactive Man. If Superman and Batman receive votes every U.S. election--as do Homer and Bart Simpson—why not this atom bomb survivor?

Then there are the Clinton voters: Waylon Smithers (loves his boss, not his politics).

Patty Bouvier (it’s the Republican VP she has problems with).

Apu Nahasapeemapetilon (xeonophobes okay as customers, political leaders not so much).

Marge Simpson (praying for a G-rated election next time).

They’re most definitely not

And would you know it, I counted the same number (12) of voters for Trump. Here they are, with a glimpse into how they view the world.

Krusty the Clown: (considers himself a personal friend of the Donald) The real clowns are in Washington, with their politics as usual.

Selma Bouvier: (after MacGyver, her favourite TV show is The Apprentice) America is for real Americans; let’s fire all the phonies and foreigners.

Mr. Burns: (A pro-nuke millionaire who doesn’t pay taxes? Excellent.) The world is a harsh place; we need a leader who will do whatever it takes--release the hounds!

Cletus Spuckler: (self-professed “slack-jawed yokel”) It’s high time me and mine get our slice of the pie, before there’s none left.

Moe Szyslak: (deplorable-in-every-way tavern owner eagerly awaits the latest groping allegation) Had it up to here with all this political correctness; things suck and we need someone who will tell it like it is.

Chief Wiggums: (his badge reads: “cash bribes only”) The world is a scary place; someone please make all the bad stuff go away!

Lenny Leonard: (still sports a Dole/Kemp ‘96 American flag tattoo) This election is rigged and no one is going to convince me otherwise.

Kirk Van Houten: (unemployed, undignified, unloved) No one listens to me; I can’t take feeling like a loner and a loser much longer.

Mrs. Skinner: (an expert at bullying her son) The world needs a strong bully to beat up on the other bullies.

Grampa Simpson: (WWII vet wore a business suit to Woodstock) Things weren’t so complicated back when I was a boy; America needs to get back on track.

Dr. Hibbert: (toughest test yet for this long-time Republican) Things are good for me, but I wouldn’t mind a tax break; laughter is the best medicine (although Obamacare is making it unaffordable).

Reverend Lovejoy: (once burned his church for insurance money) Spare the rod and spoil the child; we’re overdue for some tough love.

And then there was one

So, that leaves the fate of Springfield in the hands of one Homer J. Simpson.

Despite the fact that he once ran for sanitation commissioner as a Republican and chose Ted Nugent to be the Republican presidential candidate (after briefly considering a Democrat), Homer is essentially an independent. He has trouble with most tasks including making up his mind.

At first glance, Homer might appear demographically to be a quintessential white male Trump supporter (although he did eventually go to college), but while he clearly reasons (though he usually doesn’t reason clearly!) with direct causation, it’s not so simple.

On the one hand, Homer has a high penchant for risk, a short attention span, a high acceptance of violence, a desire to be popular as well as a constant craving for stimulation and satiation. He also likes people who win, appreciates irreverence, loves celebrity culture, and isn’t big on fact-checking.

All this, and his pugilistic patriotism and desire for simple answers makes him quite susceptible to demagoguery. Moreover, while not too bothered by the email scandal, Homer is no fan of Bill Clinton, and he did take a fantastic voyage last year through Trump’s “ginger forest.”

On the other hand, Homer can turn on a dime from extreme selfishness to selflessness, from fatalism to hope.

A loving husband and father when it comes down to it, he doesn’t appreciate Trump’s “locker room talk.”

He values Hillary’s experience in part because his wife and oldest daughter are at him nonstop about why Trump isn’t fit to be president.

The biggest challenge in deducing how Homer Simpson would vote in this election is that his most notable trait, beyond his sloth, low IQ (supposedly 55) and affinity for Duff Beer, is his impulsiveness. Homer’s worldview: Guys like me are always getting screwed, so why try your best (exception: hair-brained schemes); just take and do what you want, come what may. Essentially, he will go with his gut--unless something greater is at stake.

He is often tolerant of those different from him (e.g. he officiated gay weddings, stood up for illegal immigrants), is sometimes willing to stand up for those he considers oppressed, and feels a greater sense of community. and thus less isolation, than many of Springfield’s Trump supporters.

He will go with his gut unless something greater is at stake.

That happened this summer, when Homer and Marge are in their bedroom and turn on an anti-Trump ad, which Homer mistakes for a pro-Trump ad.

But after Marge threatens no more nookie if he votes for Trump, Homer announces: “And that’s how I became a Democrat.”

What The Simpsons producers want you to believe

That doesn’t mean, though, that he won’t change his mind.

It’s true that the show’s producers don’t think so. In mid-October, they released a clip with Homer at his polling station on November 8 intending to vote for “the candidate who forgave her husband no matter what he did,” although Vladimir Putin disguised as a Red Sox fan tries to convince him otherwise.

(It’s a funny clip. I was surprised by how many thumbs down it received on YouTube until I saw Samantha Bee’s segment on Russian Thinkfluencers.)

But because November 8 is still not here, I consider that clip just conjecture, plus Homer will still need to fill out a provisional ballot since he, unlike Putin, wasn’t on the registration list.

While most voters have been committed to their candidate for a long time, there are Homer Simpsons in towns all across America who are still undecided and easily swayed.

What do you think?

I think it will come down to whichever paid ad Springfield’s Homer sees last—and with whom he is watching it. It’s perhaps too bad that bars in the States are no longer closed on election day.