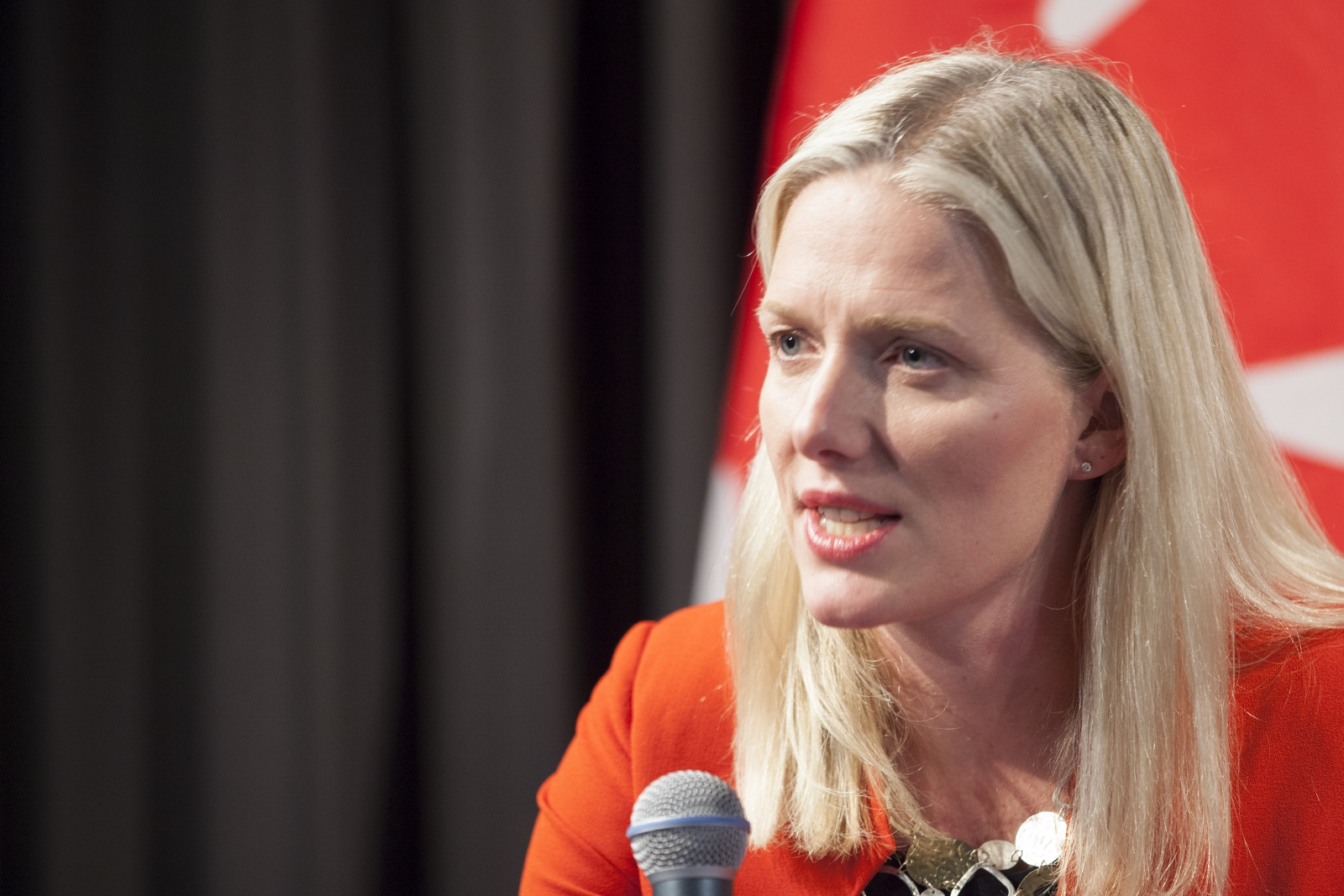 At the COP21 climate conference in Paris last year, Environment Minister Catherine McKenna shocked the world with bold climate targets, and protesters are worried today that she's backing down from them. File photo by Mychaylo Prystupa.
Previous story
Next story

First, they wanted the Canadian government's climate change lead to decry comments made on Thursday by Kinder Morgan Canada president Ian Anderson, when he said that scientists were still debating whether humans are significantly contributing to climate change. Second, they wanted her to reject the company's controversial Trans Mountain expansion project, which if approved by cabinet in December, would see up to 890,000 barrels of crude oil and petroleum shipped from the oilsands to the west coast daily and emit more than one million tonnes of heat-trapping pollution per year.

McKenna wasn't in the office at the time, but agreed to set aside five minutes to chat with them over the phone.

"Recent studies show that if Canada moves forward with the tar sands pipelines that are on the table, in a 1.5-degree scenario Canada alone would use up 23 per cent of the world's remaining carbon budget," 350.org organizer Katie Perfitt told the minister on the call, surrounding by fellow protestors.

"We know that is just unacceptable. We all believe in this room that Canada has a leadership role to play and we can't do that if it we're approving tarsands pipelines."

The sit-in and questions were part of a coordinated strategy launched in recent weeks by young Canadian climate activists to challenge members of the government at public events. They believe they can pressure the government to reject Kinder Morgan's proposal and other projects that contribute to global warming.

McKenna thanked them for expressing their concerns and acquiesced to their first demand by saying Anderson's implications are "not accurate." But she dodged the pipeline project by focusing on the process involved in approving major energy projects in Canada and emphasizing other clean energy initiatives, including the recent commitment to make federal operations 100 per cent renewable by 2025, and the imposition of a national carbon price by 2018.

"I certainly agree that we need to move to a lower carbon future," she explained. "For all major projects — pipelines and other projects — there's a process that goes through. As you know, this is something that's going to be coming before cabinet, led by Minister Carr."

The entire interaction was captured on video here.

"I hear that you want action," McKenna continued as the protestors listened intently. 'I worked extraordinarily hard on this file. Things don't happen overnight... There's a whole range of things we need to be doing and my goal is to bring Canadians together."

Her list of clean energy initiatives did not pacify the protestors however, who warned her that they would continue to occupy her office until she made a real public statement on the Trans Mountain expansion.

"There are lots of other things that the government is doing and we need all of those solutions too," said Perfitt. "But if tarsands pipelines are built, all of that stuff is going to go to waste. Unless the Canadian government rejects Kinder Morgan and other tar sands pipelines, we won't be satisfied."

Protestors also set up shop in the office of Transport Minister Marc Garneau on Friday, and on Thursday, at the offices of Natural Resources Minister Jim Carr and Indigenous and Northern Affairs Minister Carolyn Bennett. Cam Fenton from 350.org confirmed that they were kicked out of Garneau's office quickly and that the minister's staff threatened to call the police on them, but opponents of the Trans Mountain expansion say they'll continue their 'bird-dogging' technique for as long as it takes.

If it comes down to it, protesters say they will block construction of the pipeline on Burnaby Mountain in B.C., where more than 100 people were arrested in November 2014 over the project.

“Right now, Prime Minister Trudeau and his cabinet have a choice between standing with a fossil fuel company, whose CEO is publicly questioning climate science or standing with Indigenous peoples, youth and the majority of people in Canada who want to see real climate action,” said Perfitt in a press statement on their morning occupation. “At this point we would hope that choice is clear, reject Kinder Morgan.”

The issue of pipeline construction is polarizing in Canada — while industry stakeholders argue it will revitalize slumping economies and bring sustainably-extracted resources to brand new markets overseas, many environmentalists and activists believe it will push climate targets out of reach, violate Indigenous sovereignty, and poison land and water ecosystems.

In a report released Thursday by the federal panel appointed to collect additional public feedback on the project, the Trans Mountain expansion in particular was described as being among the most "controversial in the country, perhaps in the world, today." If approved, it would creating more than $46 billion in revenue for provincial and federal governments and at least 15,000 jobs per year during construction, but it would also cross unceded Indigenous territory, increase tanker traffic in local waters by 600 per cent, and threaten endangered orca populations.

The 'bird-dogging' has been making the rounds on social media under the hash tag #KMsitin. Here's what people are saying so far:

We're glad that @cathmckenna took the time to talk to us but we're still here waiting for her to make a statement on Kinder Morgan. #kmsitin pic.twitter.com/01oU63nQPo

I support #youth sitting in at your office @MarcGarneau, and wish you would speak with #kmsitin directly about Kinder Morgan! #stopKM

The phone lines are ringing off the hook here in @ec_minister's office! Keep the pressure on, friends! #kmsitin #climate101 #stopKM pic.twitter.com/QexlDL6Qjf

[email protected]_minister you said "we know we've got our international target", how do you square that with #KinderMorgan? #KMsitin #Climate101

The promotion of electric

The promotion of electric vehicles is another catastrophe since it removes Zero vehicles from the road, since everything replaced is sold and continues to be driven by others. Electric cars to date have created so many emissions in being built - from nickel mined and shipped across the world several times before becoming batteries, to the many other components used - that over their lifetimes they are just as environmentally devastating as gasoline burning cars. I have yet to see anything proving the current batch is any improvement. The fact that a car is electric does nothing to mitigate the fact that there need to be millions LESS vehicles on our roads - Pronto. What we need is car sharing programs, bike programs, incentives to give up vehicles, we need a hefty registration tax that kicks in with a 2nd vehicle registered to an address and increases with every addition. That money should go to subsidize public transportation until it is so cheap and convenient - and driving and parking charges so expensive - that people revert back to one car per household or give it up entirely and car share or rent when necessary. It is actually quite liberating to go carless, even when logistically challenging.

Any part of the BC Coast of

Any part of the BC Coast of all places in the world should be the last place for gigantic tankers to ply. There is a maze of islands for one thing, and it's all the frontline for huge weather systems. Not to mention seismic activity! The North Pacific is polluted enough from algal blooms that can be put down to climate change. And even China, long considered the main villain of climate change, is outpacing Canada in its adoption of various forms of renewable energy. This is where the future lies and we'd better get on the bandwagon before we slow cook ourselves to death.

What is this term?

What does it mean?

Tar sands re-grow? This is an industry term. Please do not use this ridiculous wordsmithing.

Sustainably-extracted... it boggles the mind. These are non-renewable resources (tar sands). Once they're gone, they're gone. They're the definition of "unsustainable".