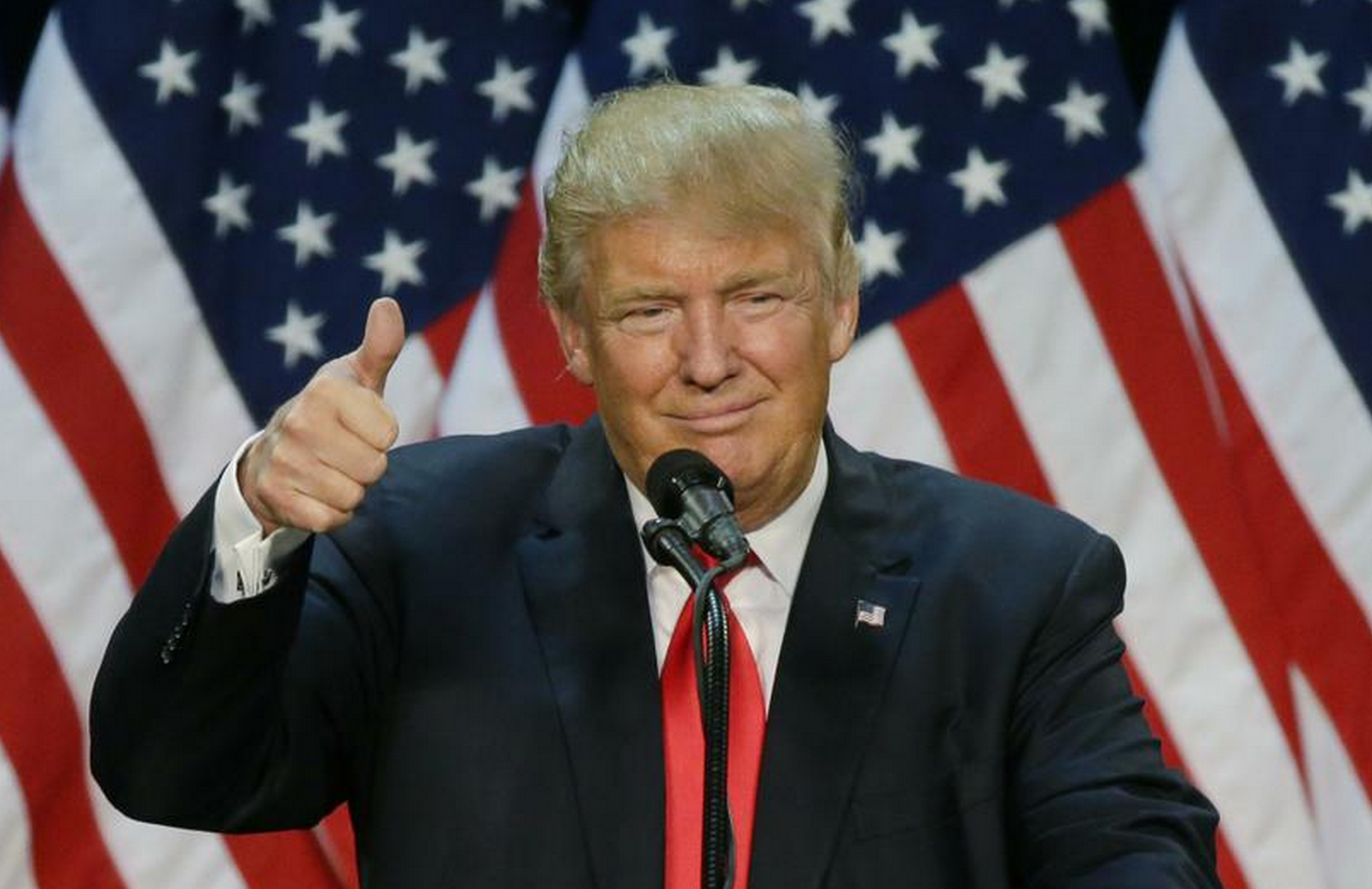 Republican businessman Donald Trump was voted in as the official president elect of the United States on Wed. Nov. 9, 2016. File photo by Associated Press.
Previous story
Next story

It was sealed at 2:31 a.m. Wednesday by The Associated Press, followed shortly afterwards by reports that Hillary Clinton had conceded the race to her bitter rival.

As a result, the country’s first African−American president, the progressive and still−relatively−popular Barack Obama, stands to be replaced by a populist he deeply disdains and who rose to political prominence by insinuating Obama was born in Africa.

Trump was written off again and again, repeatedly shocking the political establishment since last year — first by running, then by becoming a contender, winning the nomination and finally by moving into the Oval Office.

Clinton’s campaign announced she would not speak Wednesday as vote−counting continued — but CNN reported that she called Trump to concede.

The prospect of a Trump presidency jolted the markets: at one point, Dow futures plunged more than 4 per cent and Japan’s major index nosedived more than 6.1 per cent, its largest drop in years. The Mexican peso likewise tumbled and investors looking for safe assets bid up the price of gold.

Trump’s threat to scrap trade deals and slap tariffs on foreign−made goods as punishment for job outsourcing might have dismayed many Canadians, economists, businesses and brokers. Yet it was central to his message to white working−class voters in the old industrial belt.

Democrats made another bet — that his comments about Mexicans, Muslims and women that made him a hero to white−supremacist groups would prove so disgusting to other voters that Clinton would be carried to the presidency on the backs of minorities, the college−educated, and females, the coalition that elected Barack Obama.

The first reaction from a famous foreign politician came from the leader of France’s far−right National Front. Marine Le Pen tweeted: ’’Congratulations to the new president of the United States, Donald Trump, and to the American people, free.’’

He was considered so unpalatable a choice by so many that senior members of his party refused to endorse him or appear at election rallies with him. He was shunned by every living Republican nominee except Bob Dole.

The Bushes made it known they didn’t vote for him, along with Mitt Romney and John McCain. A former speechwriter for George W. Bush offered an example of the fatalistic attitude permeating political circles in Washington.

’’On the bright side, 227 years is a really good run for a republic,’’ tweeted Canadian David Frum, referring to the number of years since George Washington became the first American president.

At Trump headquarters in Manhattan, people chanted, ’’U−S−A!’’ and, ’’Lock her up!’’ in reference to Hillary Clinton. People were reportedly in tears, some even leaving early at the Democratic gathering across town.

Democrats began the evening expecting to celebrate a different kind of history.

Clinton had an evening rally scheduled under a see−through roof, a symbolic nod to the prospect of the first female president smashing the ultimate glass ceiling and occupying perhaps the most powerful office in the world.

Her campaign was repeatedly sidetracked: by hacks of her aides’ emails, conflict−of−interest allegations into her family’s charitable foundation, an investigation and leaks from the FBI and voter confusion about her platform.

The Democrats’ campaign even focused on Trump.

Clinton’s platform, titled "Stronger Together," was a nod to her opponent’s racially tinged rhetoric. The message obscured the actual purpose of her platform — economic inequality. Some elements, like a parental−leave program, are shared by her rival — who is the least conservative Republican nominee in memory.

Trump’s inimitable style of American populism veers from right to left; from military hawkishness to doveish language. He could have the opportunity to pass an unusually high number of bills, depending on which party agrees with his policy of the moment.

His North American neighbours would be watching nervously for moves on trade. He’s demanded a renegotiation of NAFTA, without offering details, and promises to rip it up if unsuccessful.

One Canadian official expressed doubt in a recent conversation that it would get that far. Even if a president did order NAFTA scrapped, the impact of the move would be softened by several firewalls — the need for Congress to reinstate old tariffs, and potentially by the continued existence of the old 1987 Canada−U.S. agreement.

"I don’t really think we’re in danger there," said the Canadian official. "There would be a revolt by the private sector... His own party would revolt.’’

If it happens, a Trump victory would also deprive the current president of a historic achievement.

A Democratic win would have placed Obama in the company of Franklin Roosevelt and Ronald Reagan as the only postwar presidents to have a successor extend their party’s time in the White House beyond two terms.

It would now require a political miracle.

Republicans roared to big victories down−ballot that allowed them to retain some control of Congress: they held the House of Representatives as expected, and narrowly retained the Senate — which would give a Republican president considerable, but not total, power.

Pundits struggled to process what was happening.

On Fox News, the moderator of the last presidential debate wondered whether, in the seat of power, he’d continue to be the erratic insult−flinger he’d been on the stump. And stumped Chris Wallace was.

’’Is he going to be different than the candidate Trump? The only answer you can really give is, ’Who the hell knows?’ And I don’t know that he necessarily knows,’’ Wallace said.

’’But let’s face it: He’s a 70−year−old billionaire who pulled off the most improbable victory in the history of our country. I’m not sure that humility and a feeling of, ’Gee, I’ve gotta change the way I do business,’ is necessarily gonna be at the top of his agenda...

Others debated what caused this result — which could keep busy generations of historians and political scientists.

A former ambassador to Russia who’d clashed with Vladimir Putin bitterly tweeted, in reference to the Wikileaks hacks: ’’Putin intervened in our election and succeeded.’’ Michael McFaul added in Russian: ’’Well done.’’

He got a blunt response from an international−relations expert who’d accidentally helped coin Trump’s foreign−policy slogan. Ian Bremmer had noted that it sounded like the ’’American First’’ isolationists during the Second World War — and Trump loved the slogan, embracing it.

Wake up world.He won because

Wake up world.He won because what used to be middle class is now poor.

The plans of many to abandon

The plans of many to abandon their country and run away to Canada is another reason why the US is hurtling to disaster. While ancestors fought and died for rights, freedoms and protections, the response today is expecting Canada to look after you? I wonder what those ancestors or your founding fathers would say about this. Canada is already overflowing with people that won't stand up to governments and our rights, freedoms and laws are disappearing also. Stand up and
fight for your country, from your country.