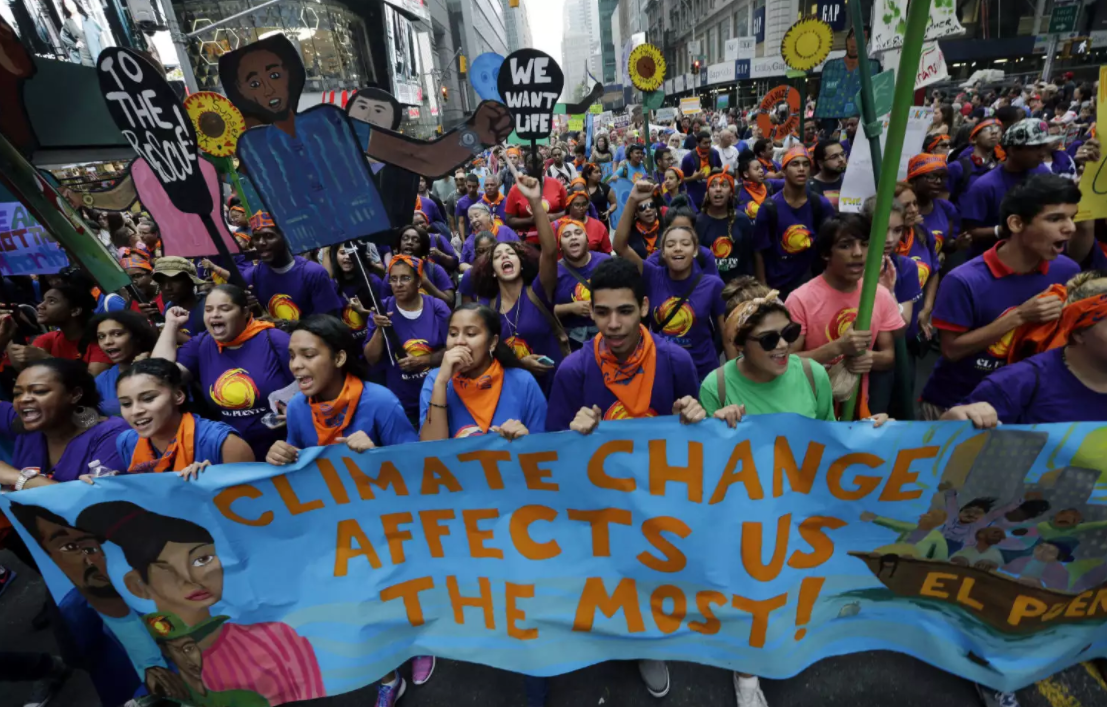 AP photo of youth marching for climate on September 21, 2014, in New York.
Previous story
Next story

In almost no other area are Prime Minister Justin Trudeau and President-elect Donald Trump’s outlooks more divergent than on climate change. Trudeau inspired Canadians with a promise to return Canada to global efforts to reduce greenhouse gases, while promoting a transition to a low-carbon economy here at home. Trump, who says he believes climate change is a “hoax” perpetrated by China, has pledged to pull the United States out of the UN climate agreement, while ramping up the use of coal and other polluting fossil fuels.

Some political insiders will advise Trudeau that now is the time to manage expectations of Canadians on climate change in light of the Trump win. We often measure our successes and failures relative to how the United States performs. And, they will argue, a Trump administration that is MIA and worse on the environment should mean that Canadians must be content have their own government do less.

Lobbyists vested in the status quo will reinforce this position, arguing that in an integrated North American economy, Canada can’t afford to get too far ahead.

For the Trudeau government, taking this advice would be a grave strategic error – for the planet, to be sure, but also in the narrow political sense. Indeed, the smart choice is neither to “dial it down” nor “stay the course.” Although counter-intuitive, it is to ramp up our level of ambition.

There is no reason to believe that Trump's election has diminished broad public support on issues like environmental protection. If anything, if you cared about climate change a week ago, you are probably a whole lot more concerned about it today. It is that heightened concern that needs a voice in Canada as we re-emerge from the shock of Trump's election. If we respond by lowering our own level of ambition, we are choosing to be bystanders as concern fades to resignation.

Many voters, especially younger ones, shifted to Trudeau in the last election, drawn by his bold promises that Canada can restore its leadership on the environment. And it is these voters who are most likely to stay home in the next election if the vision is left unfulfilled.

Trudeau will lose these voters, not because they are angry, but because they are disappointed. In this context, it won’t matter if the Liberals can convince them that it’s all Trump’s fault. These are voters who Trudeau brought on board by convincing them that the excuses of the past (including that we had to wait for the Americans before doing anything on climate change) were not going to stop Canada from taking action.

As Canadians, we can’t directly influence how a Trump presidency will affect environmental issues. But we can influence what happens here. And at their best, our political leaders can have a direct influence on the issues themselves.

If we are indeed about to witness a decline of American involvement in global solutions to problems like climate change, that’s not a reason for Canada to merely stay the course. It’s a reason to inspire ourselves to double down. On eliminating subsidies for fossil fuels now, not a year or two (or three) from now. On using the proposed carbon tax and related policies to shift faster toward renewable energy, energy efficiency, more efficient industrial processes, and net-zero-emissions vehicles and buildings. On growing Canada’s clean-tech sector that has become a model for export-oriented job creation. On ensuring that the $125 billion that Canada will spend on infrastructure over the next decade prioritizes “climate critical” initiatives while avoiding projects that lock in a wasteful high-carbon future.

These measures, and others, are what will create the low-carbon, prosperous future that Canadians want. And the good news is, it’s the same future that other countries want. By working with the Coalition of the Willing at the U.S. state level, and through processes like the UN climate negotiations happening in Marrakesh right now, we can help build that future.

And here’s the best part. If we create the low-carbon economy here and elsewhere, the Americans will come – whether it’s under this president or the next one. But only if our leaders are inspired to create these winning conditions.

- Aaron Freeman is the Founder and President of GreenPAC, Canada’s non-partisan organization to build environmental leadership in politics.