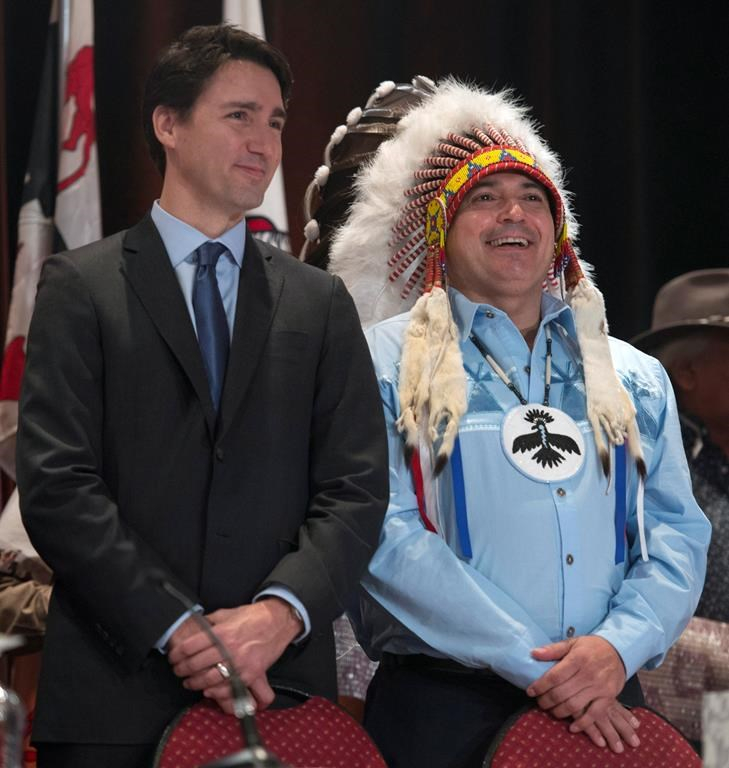 “If you were to get lost in the bush, I could find you.”

It’s an oddly placed sentiment in the city heat of Marrakech, Morocco, yet an entirely appropriate one for an indigenous panel at the UN climate talks hosted by Canada’s Minister of Environment and Climate Change, Catherine McKenna.

François Paulette, revered Canadian Indigenous leader and elder from the Dene Nation, told an international crowd of delegates, campaigners and press that back in Canada, his place is in the wild.

It is there Paulette learned from his elders the meaning of sin: “The biggest sin a man can make is to abuse the earth.”

“And now that’s why we’re in the place we’re in and why there is global warming.”

Although Paulette said he is not one for the city — he’d rather be on a riverbank back home in the Northwest Territories — he’s no stranger to international diplomacy. At his sixth UN climate summit, Paulette is more determined than ever to ensure indigenous perspectives and rights are central to international climate plans.

By all appearances Canada seems determined to do the same.

“As the Prime Minister of Canada, Justin Trudeau has said there is no more important relationship than our relationship with indigenous peoples, our First Nations, Inuit and Metis peoples,” McKenna said.

“I really believe that and that’s why it’s so important we’re working together.”

At last year's UN climate talks in Paris, Canada’s delegation was among those leading the fight to include Indigenous rights in the agreement text.

Yet Indigenous leaders sitting alongside Paulette and McKenna at the panel say more has to be done to live up to promises to respect Indigenous rights, both on the international stage, and domestically in Canada.

“We have a problem with that.”

Paulette added that because of the environmental impacts of oilsands development on water and climate, he also cannot support the construction of new pipelines.

The Trudeau government is expected to approve the Kinder Morgan Trans Mountain pipeline expansion project in coming weeks and in September approved the Pacific Northwest LNG export terminal — which is projected to be Canada’s largest single point source of greenhouse gas emissions — near Prince Rupert, B.C.

The recent project approvals, which critics say have contravened Canada’s promises to Indigenous peoples as well as its climate commitments, have some worried Canada isn’t prepared to walk the talk.

“If we’re going to implement the Paris Agreement, it can’t just be in words,” Paulette said. “We need to be a part of that process every step of the way.”

The TransCanada Corp. Energy East pipeline and the Kinder Morgan Trans Mountain expansion pipeline are facing intense Indigenous opposition, including legal challenges. A Canadian court found the now stalled Enbridge Northern Gateway pipeline was conditionally approved by a government-appointed panel without adequate consultation for First Nations, as is required by the Canadian constitution.

Hart said if Canada is to live up to its climate commitments it cannot afford to build more pipelines.

The proposed path for the Energy East pipeline crosses Manitoba on its route to export facilities on the east coast. The controversial pipeline, which would transport 1.1 million barrels of oil per day, has been called a threat to indigenous land and water. The project’s current route has it crossing over the territory of 50 First Nations, according to the Council of Canadians.

“Our people are right smack dab in the middle of proposed pipeline development currently on the table,” Hart said.

“If there’s any expansion done in Canada it will be next to impossible for Canada to meet those targets now and in the future.”

Hart, who was speaking on a stage at the Indigenous People’s Pavilion at the UN climate talks, turned to address McKenna personally.

“And Minister McKenna, you as well as your colleague [transport] Minister Carr, know full well I’ve publicly stated I cannot support any pipeline currently or in the future.”

“Indigenous peoples have known for thousands of years how to protect the land, as Trudeau pointed out in Paris last year,” Hart said.

He added the presence of indigenous leaders at the talks is to ensure that knowledge is incorporated into the Paris Agreement and what it means for major projects back in Canada.

Natan Obed, president of the Inuit Tapiriit Kanatami, said Canada will actually miss out on the true rewards of climate action if it excludes indigenous perspectives.

“For the Inuit, in our homeland, we are on the forefront of climate change,” Obed said.

“When we talk about a global temperature increase of 1.5 or two degrees Celsuis, we don’t quite know what that means for the Arctic.”

Scientists have documented Arctic air temperatures warming twice as fast as elsewhere on the planet. Obed said the model his community has been using predicts the Arctic will experience two to four times the rate of warming felt elsewhere.

Warmer temperatures and melting sea ice have dire consequences for the Inuit, he said.

Climate change “has a fundamental impact on our way of life and cultures as well as the way we transmit knowledge between generations.”

Obed said his people are inherently coastal people, who have carved out a unique way of life in a region of the world covered by ice for most months of the year.

“We have a connection to the ice that is beyond most cultures and societies in the world. So this issue matters to us more than anything.”

Echoing the concerns of other indigenous leaders at the panel event, Obed said these unique indigenous concerns should not be left out of Canada’s larger climate conversation.

“If we can't have policy space about an area that is most affected, that has an Indigenous people whose society and way of life is threatened, then I doubt Canada will get the most it can from climate action.”

This article was originally published by Desmog Canada. It has been reprinted with files from National Observer.