By Seble Samuel | Opinion, Energy, Politics | November 21st 2016
#576 of 2033 articles from the Special Report: Reports from the Race to a Safer World 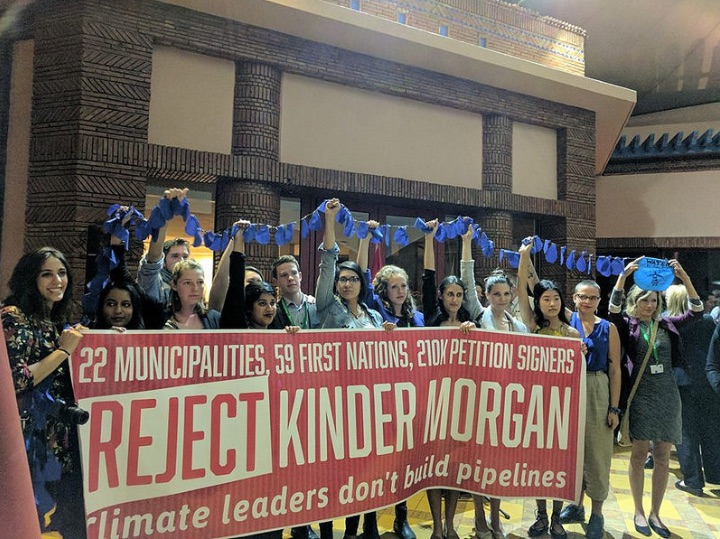 As the United Nations climate change negotiations came to a close in Marrakech last weekend, a group of young Canadians who attended the conference pressed the federal government to take aggressive actions to tackle the international problem with a list of nine demands.

The young Canadians, members of the Canadian Youth Delegation (CYD) say they have a significant role to play in a sustainable and fair transition to renewable energy. These young leaders, who work to strengthen the youth climate movement, said that their demands were meant to ensure that climate discourse does not become merely empty rhetoric.

Their calls come as the federal government is on the verge of making important decisions about major Canadian pipeline projects such as Enbridge's Line 3 replacement project, an expansion of an existing line from Alberta to the U.S. Midwest that is considered to be the largest project in the Calgary-based company's history. The government is also expected to make decisions on Enbridge's Northern Gateway west coast pipeline and Kinder Morgan's Trans Mountain expansion, also to the west coast.

Environment Minister Catherine McKenna has said that Canada wants to be an international leader on climate change, and she announced plans on Monday to accelerate the country's plans to phase out its remaining coal-fired power plants, one of the world's largest sources of carbon pollution, by 2030.

The young Canadians believe the federal government needs to do much more.

Here were their demands:

"If Justin Trudeau is serious about renewing nation to nation relationships with indigenous peoples and is serious about the climate commitments that he made in the Paris Agreement, then we know, and scientists say, no new fossil fuel infrastructure can be built," said Amina Moustaqim-Barrette.

A recent report from the London School of Economics and Political Science has indicated that Canada is already off track for achieving its national climate commitments, yet the Kinder Morgan pipeline is nearing approval and President-elect Donald Trump could put the Keystone XL pipeline back on the table.

"We dropped a petition of 210,000 signatures, 59 different First Nations across Canada, and 22 municipalities that are calling on the Liberal government to reject Kinder Morgan," said Kell Gerlings.

Expansion of the Kinder Morgan pipeline would twin the existing pipeline infrastructure running 1,150 kilometres between Edmonton, Alberta and Burnaby, British Columbia. It would nearly triple current capacity from 300,000 to 890,000 barrels of crude oil per day.

Thousands protested in Vancouver this weekend against the expansion of the Kinder Morgan pipeline. Many observers believe the controversial pipeline could be approved next month.

The environmental movement celebrated when President Obama rejected the Keystone XL pipeline in November 2015 as a key victory for climate justice. This TransCanada pipeline would traverse nearly 1,900 kilometres from Alberta to the Gulf Coast of the US. The Trump administration has brought the issue back to the table, stating in the Republican Platform that the Party "intends to reverse the current Administration's blocking of the Keystone XL Pipeline."

Solidarity has been growing with the Standing Rock Sioux who have been leading the Sacred Stone Camp to resist development of the Dakota Access pipeline. The planned pipeline would cross over 1,800 kilometres from North Dakota to Illinois, transporting over 450,000 barrels of oil per day. The developer announced on Friday that the pipeline would not be rerouted.

5. A justice-based transition to a green economy

"In the last couple years, green jobs have actually surpassed fossil fuel jobs. So it's a huge fallacy that the oil industry is the only thing keeping Canada's economy alive," said Menezes. "We need to see the government of Canada invest in transitional jobs so that we can train people on green sources of energy to make sure workers don't get left behind. The rhetoric of workers being left behind and that being the fault of activists is clearly a move by the government to undermine the climate justice movement."

7. Pay for loss and damage.

Negative impacts from climate change will still occur despite increasing climate resilience and the reduction of emissions. These impacts are known as loss and damage.

"Canada has committed around $3 billion to adaptation funds for developing countries," said Moustaqim-Barrette. "We're asking that Canada also take responsibility for its ongoing colonial legacy and its historical responsibility for this crisis, and not only provide the funds necessary for adaptation but also provide money for loss and damage."

"We need climate finance to address the global refugee and migrant crisis," said Menezes. "Canada's lack of intake of refugees, migrants & displaced peoples is a violent act and we need the government to understand that we see it this way and we will mobilise around that. Climate change does not care about borders and we need to recognise that our emissions and our oil exports will have a direct effect on the millions of people that are going to be on the move."

"If Canada is able to subsidise the fossil fuel industry by $3.3 billion, then that wealth is there, and it can be directed to a green transition," said Gerlings.

G20 countries provide roughly $444 billion every year in fossil fuel subsidies. This is around four times the amount of renewable energy subsidies. A shift in funding priorities is necessary for a renewable transition.

The United Nations Declaration on the Rights of Indigenous Peoples was adopted by the United Nations General Assembly in 2007. While Canada originally voted against UNDRIP, along with the USA, Australia and New Zealand, the federal government officially adopted the declaration in May of this year. Despite this, UNDRIP has yet to be formally accepted into Canadian law.

"[UNDRIP] will set a new standard of what climate justice looks like," said Menezes. "It needs to be the central focal point to how to move forward."

By The Canadian Press & Canada's National Observer | News, Energy, Politics | November 21st 2016
Reports from the Race to a Safer World

By Seble Samuel | News, Energy, Politics | November 18th 2016
Reports from the Race to a Safer World

By Seble Samuel | Analysis, Energy, Politics | November 17th 2016
Reports from the Race to a Safer World

By Seble Samuel | News, Energy, Politics | November 14th 2016
Reports from the Race to a Safer World

Excellent that young people are coming forward, demanding that Government actively protect the air, water and land they will depend on for their lives and livelihoods in the future.

Excellent that young people are coming forward, demanding that Government actively protect the air, water and land they will depend on for their lives and livelihoods in the future.

Way to go CYD! Outstanding!
And just when I was losing all hope in our sleazy, "sunny ways" crop of corporate whores aka our Liberal (majority with 39% pop vote...) government, you show up to keep Canada / hope alive!
Way to Go! It's your future your fighting for... I apologise for my generations doing it's best to screw you... but I'm buoyed that you really "get it" and will not let that happen!
Please wear those cool T-shrts on the KM protest lines so I'll know who to offer a solidarity hug to!

Welcome to our future. This

Welcome to our future. This is such an encouraging article. I give you the power to determine our future. And I know you will choose appropriately. You shall be my future.