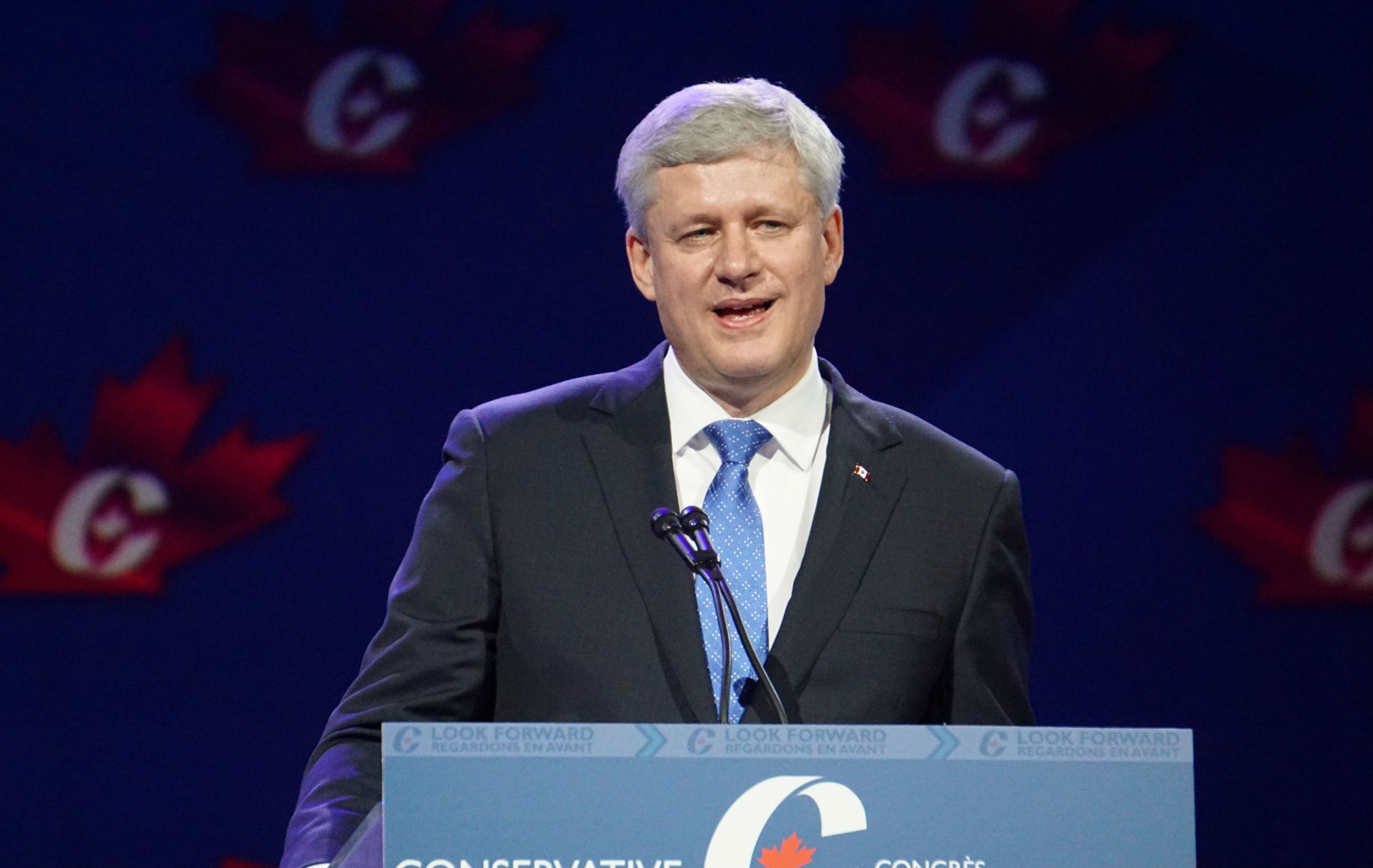 Former Canadian prime minister Stephen Harper speaks to delegates at a Conservative Party of Canada convention in Vancouver on May 26, 2016. Photo by Elizabeth McSheffrey
Previous story
Next story

As was the case during his time in Ottawa, Canada’s 22nd prime minister remains a divisive figure.

A year has passed since Stephen Harper stepped down as Canada’s prime minister, following a federal election in which the Conservative Party lost almost 235,000 votes from its 2011 “majority mandate” total — more than 149,000 of them in British Columbia.

The current inhabitant of 24 Sussex, Justin Trudeau of the Liberal Party, has coasted through a honeymoon of sorts. The absence of discernible rivals in either of the two other major parties makes voting intention polls futile and approval rating surveys superfluous.

Whether Conservatives like it or not, Harper is still the most powerful figure in their movement. It stands to be seen what kind of success any of the people who are seeking his job will have in the country’s federal political scene. This month, Insights West decided to take a look at how Canadians relate to Harper’s tenure.

When asked to provide an assessment of Harper’s time in Ottawa, Canadians are divided. Almost half (47 per cent) disapprove of his performance as prime minister, while slightly fewer (44 per cent) approve of it.

There is a noticeable gender gap on this question, with approval for Harper’s tenure reaching 53 per cent among men, but just 35 per cent among women. Canadians aged 35-to-54 are also more likely to hold positive views on Harper’s performance (47 per cent) than those aged 18-to-34 (41 per cent) or those over the age of 55 (42 per cent). While Baby Boomers were instrumental in the Tory victories of 2006, 2008 and 2011, they are now as critical of Harper as centre-left minded Millennials.

On a regional basis, the role that British Columbia played in the 2015 victory of the Liberal Party cannot be underestimated. Once a bastion of the Reform Party, Canada’s westernmost province is now extremely dismissive of the Harper years, with a majority of residents (56 per cent) disapproving of the former prime minister’s performance. Only Atlantic Canada — where the federal Liberals won every seat in the 2015 federal election — demonstrates a higher level of rejection (64 per cent).

There are some pockets of encouragement for the former Conservative leader. Alberta, where a majority of voters supported Tory candidates last year, sees 58 per cent of residents approving of Harper’s tenure.

There is little change in the way the faithful base feels about the only centre-right prime minister since 1993, with 92 per cent of Conservative voters in 2015 approving of Harper’s performance — a stark contrast with the 33 per cent of Liberals and 20 per cent of New Democrats who feel the same way.

Still, there are no great differences on the “history” question when it comes to age. Roughly a third of Canadians in all three age groups think Harper will be regarded as either “good” or “one of the best.” Generation X is evenly split, but the proportion of Millennials and Boomers who think he will be seen as a “bad” or “one of the worst” heads of governments increases to 36 per cent and 38 per cent respectively.

So, do we miss Harper in Ottawa? Not really. Only Prairie residents and Conservative voters in 2015 express an extraordinary level of attachment to the former prime minister. Canadians are divided on his tenure. It cannot be denied that Harper arrived at the correct time (the height of animosity towards government following the Sponsorship Scandal) and possessed the right tools for success (his campaigns outplayed the Liberal Party under three different leaders). He had a chance to re-define Canada. At this point, Canadians are not entirely certain that he achieved his goal.

About the poll: Results are based on an online study conducted from November 15 to November 18, 2016, among a representative sample of 1,002 Canadian adults. The data has been statistically weighted according to Canadian census figures for age, gender and region. The margin of error — which measures sample variability — is +/- 3.1 percentage points.

What Trump doesn't realize he shares with this former Mexican president

How the prairie elections were won and lost

During his tenure, a root

During his tenure, a root canal without novocaine.
The last federal election, a Harper hemorrhoidectomy. We got rid of our pain in the ass.
Oh, Canada!

Those who care about

Those who care about democracy and the rule of law will miss Harper about as much as they would miss the pain caused by a rotten tooth after the tooth has been removed.

Those who care about

Those who care about democracy and the rule of law will miss Harper about as much as they would miss the pain caused by a rotten tooth after the tooth has been removed.