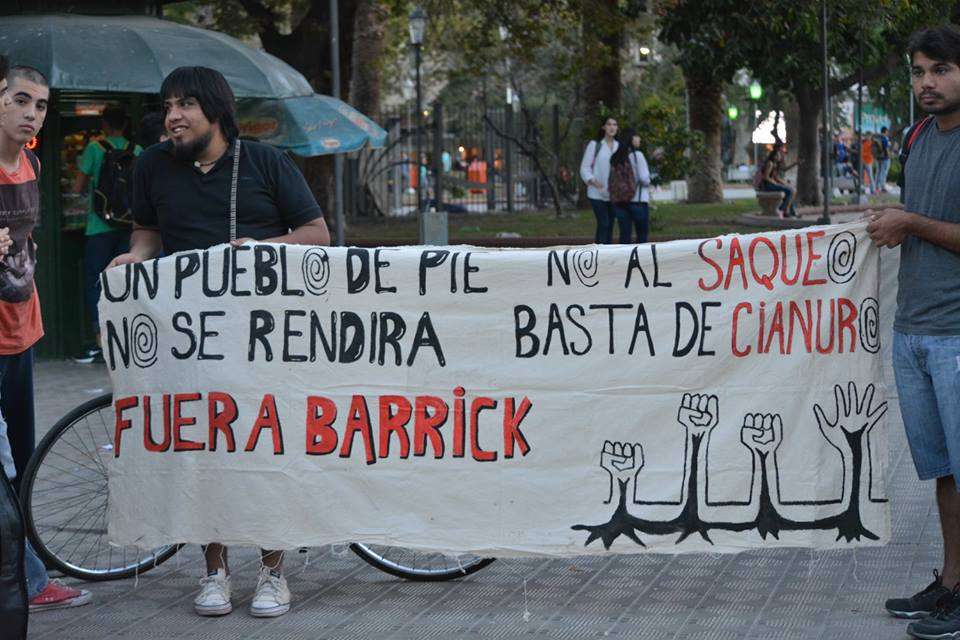 Protesters speak out against Barrick Gold's Veladero mine in Jachal, Argentina on April 23, 2016. Photo courtesy of Jachal no se Toca.
Previous story
Next story

If Canadian Prime Minister Justin Trudeau was expecting a red carpet welcome during his visit to Argentina last week, he wouldn't have received it from the people of Jachal.

To many residents of the small northeastern city, it is not the bright-eyed Liberal leader who represents the great nation of Canada, but Barrick Gold, a Toronto-based mining giant with a bad reputation in the Argentinian province of San Juan.

And while Trudeau may have been in the South American country to bolster international relations and talk free trade, it was Barrick Gold that stole his spotlight, explained Mr. Enrique Viale, president of an environmental lawyers' association in Argentina. Viale said the community in Jachal has singled out the mining titan for causing the “worst mining disaster in the history of the country" near a lucrative gold mine in the northwestern part of the country.

Our countries have common goals – President @mauriciomacri & I will work closely together to create opportunity for Canadians & Argentinians pic.twitter.com/uHauKMxZEV

Barrick Gold, the largest gold producer in the world, has repeatedly brushed off these accusations as "not credible," but local activists are relentless.

Hermann is one of the leaders of a citizens’ group demanding that Barrick Gold shut down its lucrative Veladero mine, open since 2005 in the Andes cordillera.

Hermann's organization, Jachal no se toca (Don’t touch Jachal) has accused Barrick of contaminating rivers and underground aquifers after leaking cyanide, arsenic and heavy metals into the environment during a spill in the area in September 2015. Less than a year later, the company admitted on Sept. 8 to a second “environmental incident," involving another leak of cyanide solution onto a leach pad at the very same Veladero mine.

According to Barrick Gold, the latter incident was contained on site and no harm came to the surrounding environment.

“There was no spilling of cyanide solution," said Matias Macial, the company's spokesperson in Buenos Aires told National Observer. "It was the breakage of a pipe which provoked the release of solid minerals from the... basin.”

His Toronto-based colleague, senior vice-president of communication, Andy Lloyd, agreed in a separate interview and dismissed Jachal no se toca's claims as “not credible."

Jachal's citizens, however, have no plans to let it go. Since September last year, signs and posters have been plastered across town reading, “Water is worth more than gold,” and “How much gold is our health worth?”

Residents are even taking turns staying in a permanent encampment set up in the centre of town and many of them occupied their local city hall for over 30 hours last month.

Backed by lawyers and researchers from across the country, the citizens’ group is accumulating independent studies that contradict Barrick Gold’s version of the cyanide spill story. The research commissioned by the group and done by the National Technological University (Universidad Tecnológica Nacional) and National University of Cuyo (UNCuyo) have shown that strong doses of cyanide, mercury and heavy metals were present in local waterways following the event.

On August 25 and 26 this year, UNCuyo collected 13 water samples in different areas of Jachal. The laboratory results obtained by National Observer show many of them were contaminated to the point of being unfit for human consumption, irrigation or aquatic life.

The Canadian company rejects the conclusions of the academics.

“Every independent analysis has shown the incident of September 2015 posed no risk to people or the environment,” Lloyd said.

His colleague, Maciel, said the same about the second incident the following year.

“It’s like asking the wolf 'how goes the hen house?'” he explained. “We’re witnessing a slow, silent, invisible and merciless contamination that will last for many years.

“This is a serious problem. If it doesn’t stop now, we might have to prepare ourselves to either die, or leave the area,” added Hermann.

Facing public unrest and opposition, along with growing national media attention because of Veladero, the province of San Juan ordered the temporary closing of the Barrick Gold mine in September and forced the company to submit to a series of inspections. The mine reopened in October after the company met the required safety regulations and submitted a comprehensive work plan with additional security measures, as had been required by a judge.

“Barrick has been at the disposal of the authorities and justice from the start and has collaborated by providing all the requested information,” said Maciel.

Trudeau said last week that Canada wanted to increase its collaboration with Argentina on sustainable mining efforts to ensure that resource development was done in a way that was properly regulated, environmentally conscious and socially responsible.

But Barrick Gold has already been fined more than 145 million pesos (about $12.7 million) for alleged violations related to toxic waste. And soon after authorizing the restart of Veladero’s operations in October, San Juan Governor Sergio Uñac warned that the mining company was out of chances: “From now on, its behaviour must be impeccable," he said, in comments that were broadcast on an Periodismo para todos, an investigative news show in Argentina.

For Viale, however, the provincial government’s measures are little more than a smoke screen. He said the sanctions and fine imposed on the company are completely ridiculous.

“Barrick has extracted this money from the mountains of San Juan in under six days," he told National Observer. "This fine was only imposed to quiet things down, to save face."