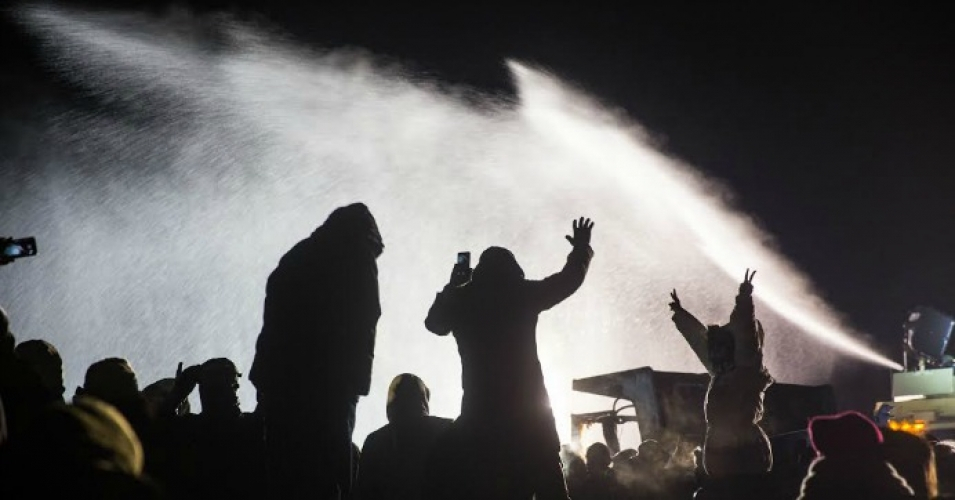 One week after the federal election, LaDonna Brave Bull Allard was in Washington, D.C. preparing to march on the White House and demand a halt to the Dakota Access pipeline.

Allard is the founder of the Sacred Stone camp in North Dakota and the historical preservation officer for the Standing Rock Sioux. Was she worried about the new President-elect, Donald Trump?

She wasn’t. “It’s the ‘same old, same old’ with the U.S. government,” she said over the phone. “We’ve been fighting them ever since they stepped onto our country.”

What did concern Allard was the increasing threat of a militarized crackdown. Officers have increasingly deployed tear gas, rubber bullets, sound cannons and armored vehicles on the peaceful protesters at Standing Rock. “No one is going to hurt us here in Washington, but they’re hurting my people in North Dakota,” she said.

By week’s end, Allard’s fears had become a reality. On Nov. 20, at a standoff near the encampment that lasted for more than six hours, police sprayed a crowd of roughly 400 protesters with water in temperatures hovering below freezing. Camp medics reported that hundreds were treated for hypothermia. Twenty-six people were hospitalized. But that was not the end of it: National Lawyer’s Guild observers reported that several people were unconscious and bleeding after being shot by rubber bullets, according to a statement from the camp, while a 21-year-old protester from New York City, Sophia Wilansky, was undergoing multiple surgeries after most of the muscle and soft tissue in her arm was blown away by what she and other witnesses claimed to be a grenade. The Sheriff’s Office denied that they had used grenades or any devices that produced a flash and bang.

At the end of the clip, they try to shoot drone w/ water cannon#NoDAPL pic.twitter.com/N0S1Sic2TQ

It is now more than six months since water protectors set up camp in April over concerns that Energy Transfer’s Dakota Access pipeline will traverse sacred sites and threaten the Missouri river.

The Sacred Stone encampment is based on Allard’s land, on the banks of the Missouri. Since late-July, when the tribe sued the Army Corps of Engineers for issuing permits to Energy Transfer, the camp has swelled into the thousands, in what some have described as the largest gathering of Native Americans in recent history. By Nov. 21, the number of arrests had reached 528, according to the Chicago Tribune.

The day Allard was in Washington, thousands of people across the U.S. attended more than 300 rallies supporting Standing Rock (39 were arrested after a New York City sit-in, and Bernie Sanders joined Allard in Washington). Many were calling for Obama and the Army Corps of Engineers to deny the last remaining easement for the pipeline — at the site where it will cross under the Missouri River, just upstream from the reservation. That would force Energy Transfer to re-route the pipeline, apply for permits along the new path, and ask their investors for more money and time to complete construction. 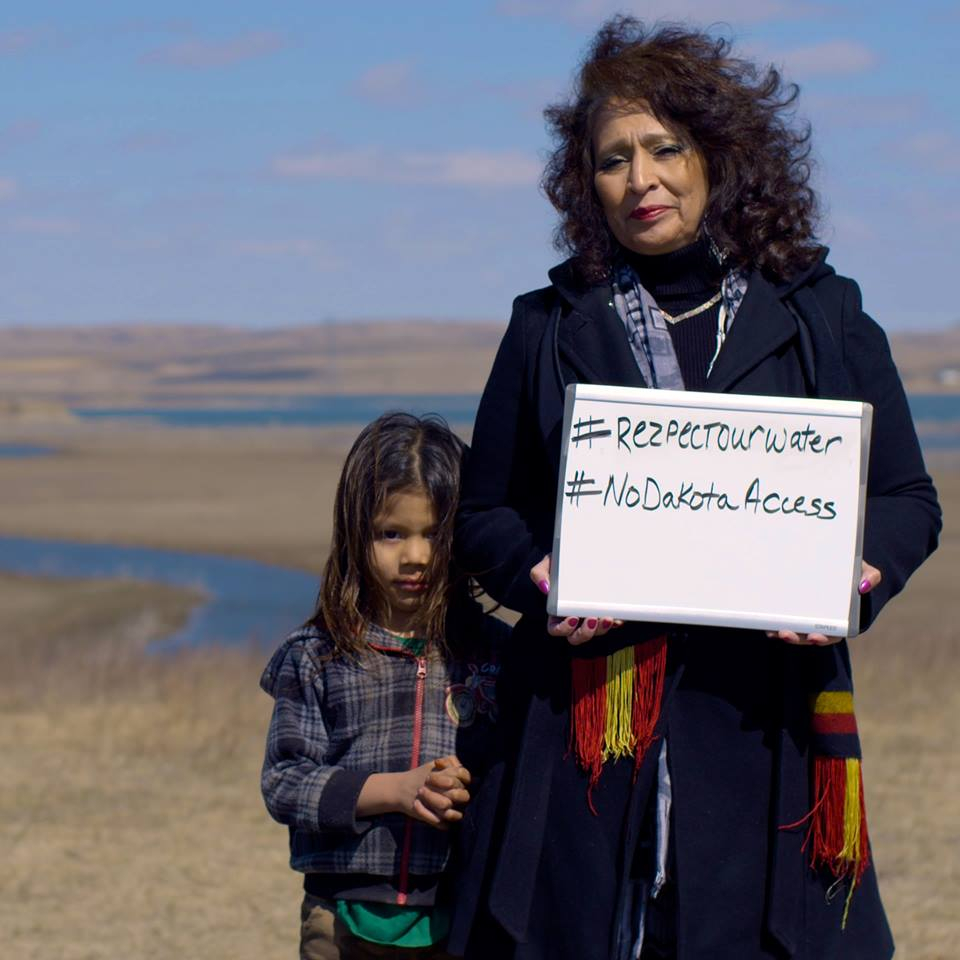 The day before the march in Washington, the Army Corps announced that they would be delaying the easement until they are able to perform an environmental review. This seemed promising for the tribe. But with a new administration about to take charge in two months, a delay also raises the question: what will be the fate of the Dakota Access pipeline if the Obama administration doesn’t intervene now?

“I do think the election has made this more urgent,” said Jan Hasselman, an attorney at Earthjustice who is representing the tribe. “I don’t expect that they’ll just leave the issue for the next administration to decide, because we know how that’ll go.”

Hasselman was alluding to the financial ties between Trump and Energy Transfer. Trump invested at least $500,000 in Energy Transfer Partners and at least $50,000 in Phillips 66 in 2015, according to a report published by CNN (Phillips 66 will own 25 per cent of the Dakota Access Pipeline once it’s completed). Kelcy Warren, the CEO of Energy Transfer, donated more than $100,000 to the Trump campaign since June, Reuters reported. And Harold Hamm, the fracking tycoon who is also CEO of Continental Resources, and — according to the New York Times, a candidate for both the Interior Secretary and Energy Secretary posts — has told investors that oil fracked by his company will flow through the Dakota Access pipeline. In other words, Trump appears to have personal financial incentives in seeing that Dakota Access gets built.

But what if the Obama administration does deny the easement before Trump takes over?

Energy Transfer would then have to re-route the pipeline, negotiate with the new landowners and apply for new permits at the site. As Cody Hall, a spokesperson for the Red Warrior Camp at Standing Rock, told me in September, this would require the company to ask for more money and time from their investors, who might be deterred by the growing protests from coughing up more. But this would not be the first re-routing for Dakota Access; the pipeline’s original route had it traversing the River north of Bismarck. But the threat this posed to the municipal water supply caused the company to divert the pipeline to a point near the reservation in September 2014. In other words, a denial of the current easement could protect the local water supply and Standing Rock’s sacred sites — but it won’t be the end of the fight for the #NoDAPL water protectors.

And the Dakota Access pipeline will not be the only pipeline that could affect Allard either: Enbridge’s Line 3 oilsands pipeline would impact the White Earth reservation in Minnesota, where Allard’s two-month old grandson now lives.

The reality is that land protectors, like Allard, are likely to find themselves scrambling against an onslaught of new pipelines and fossil fuel projects for the next four years. Less than a year after Obama rejected Keystone XL, Trump has announced he will greenlight the pipeline in his first hundred days. And in addition to Trump’s investments in fossil fuels, Vice President-Elect Mike Pence called for an expansion of offshore drilling even after the Deepwater Horizon disaster. The Koch brothers, backers of the climate denial movement, also donated more than $300,000 to his 2012 gubernatorial campaign, Reuters reported. And on top of that, another infamous climate skeptic, Myron Ebell, is now leading the Environmental Protection Agency’s transition, placing him in a position to fulfill Trump’s election promise to gut the agency and roll back environmental regulations.

“Why would we be disheartened? We’re nine thousand and growing,” she said of the people that have passed through Sacred Stone. What began as twenty campers protecting the local water supply has grown into a nationwide movement for native rights and an end to fossil fuels. Once Trump and Pence take office, the tribe — and many other communities fending off new pipelines and extraction projects — will find themselves appealing to a government far less sympathetic to their concerns, and will likely be less able to appeal to government agencies, like the EPA, to ensure their safety and health.

But Allard, at least, is confident that “the people” will stand behind her.

For what it's worth, my heart

For what it's worth, my heart, head, and soul is with you guys down in the States trying to combat denialists like the guy you elected as it is with us up here in Canada. In order to get rid of our version of Trump (Harper) we elected, with a majority, his Liberal opponent (Justin Trudeau) who promised us and the world at COP 21 swift and extensive environmental legislation. So what horror did we get? You guessed it, almost a Harper clone, a corporate sell-out. He's just OKed 2 huge oil pipelines from Alberta's oil sands, with a probability of a third OK in the near future.
I now question whether democracy rules in either of our lands. Clearly corporatocracy is clearly the boss. We have elected Pharaohs, not leaders, while we, the chosen people, have more than one Red Sea to cross. Will we make it?