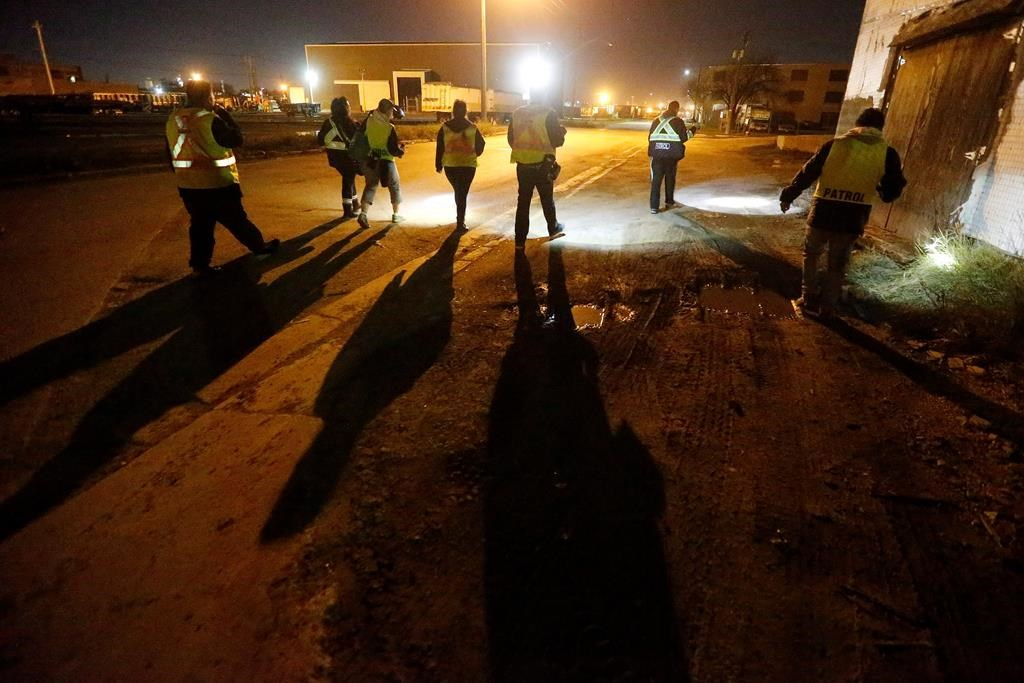 The 2014 discovery of 15-year-old Tina Fontaine's body — wrapped in a garbage bag and discarded in the Red River — shook Winnipeg to its core.

To this day, it prompts residents of the city's North End neighbourhood, a low-income area with a high crime rate, to try to prevent others from meeting a similar fate.

With virtually no public funding, they comb the river, the shoreline and the streets, determined to make a difference.

Bad weather doesn't deter them. Neither does the very real risk of danger.

"Tina Fontaine's untimely demise — the disrespect that was shown to her personhood — was the last straw for myself, my family and my community at large," says James Favel, who relaunched a dormant street patrol called the Bear Clan in 2015.

Armed with flashlights, reflective vests and two-way radios, Bear Clan members break up into groups of eight or nine and methodically walk the neighbourhood block-by-block. They pick up drugs, paraphernalia and weapons lying on the ground. They hand out packages of food and safety items to the most vulnerable.

They ask everyone they come across how they are doing. At all times, they engage.

"How are you doing? You OK?" Favel asks a teenage girl as he leads his group down one residential street.

The girl is not eager to talk. A man in his 30s is nearby. The girl refers to the man as her boyfriend, but the Bear Clan has seen her before and is concerned the man may be exploiting her.

They ask her if there is anything she needs. She and the man leave and go into a building. They know there are eyes on the street.

A few blocks later, a used syringe is found outside the entrance to a nursery school. Bear Clan members pick it up with pliers and put it in a container.

"It used to be that when we found needles, they would be in a quiet, hidden-away location," Favel says.

Now they are everywhere.

It is, relatively speaking, a quiet night. A large knife is found on the ground and put away safely. A police tactical unit surrounds and enters a house, causing one Bear Clan group to temporarily stop its progress.

A sex-trade worker, who appears very intoxicated, thanks patrol members for food they give her. Then she tells them, somewhat politely, to get away from her "office."

There are no violent confrontations on this night. Patrol members are greeted warmly as they walk through the grounds of a public housing complex where children are playing.

The Bear Clan Patrol relies on private donations. A pharmacy has given them naloxone kits to help people who overdose on drugs.

Favel and others cover many costs out of their own pocket. When a toddler disappeared in March near Austin, Man., a Bear Clan crew drove the 300-kilometre round trip and paid for fuel and other expenses themselves.

One kilometre to the east, the same type of personal commitment drives Kyle Kematch and other volunteers in a group called Drag The Red. Kematch and Bernadette Smith, who have both seen loved ones disappear, set up the group following Fontaine's death.

Kematch's sister, Amber Guiboche, disappeared in 2010. He hopes that by scouring the Red River — by motorboat, canoe and walking along the shoreline — he may be able to bring closure to his family and others.

"What keeps me going is my sister. You've got to keep going for your family," Kematch says as he prepares to put in a canoe donated by a local wilderness rental business.

"What would you do if your loved one was missing, right? You'd do the best you can."

The Red River is where some of the missing end up.

In 2003, an arm and a leg belonging to Felicia Osborne were pulled from the river, three months after she disappeared. She was 16.

On this day, Kematch is joined by Melvin Pangman, who lost a nephew to suicide in the river.

"I heard of a group called Drag The Red and I gave them a call and Kyle was there immediately. And he searched right until my nephew came out of this water, and ever since then I've been helping him."

Pangman's daughter, Kayleen McKay, raised more than $14,000 in May, running 450 kilometres from Duck Bay to Winnipeg. She donated money to Drag The Red so that it could buy a motorboat.

Before getting into the canoe, Pangman — dressed in a jacket and tuque against the cold weather — says he keeps giving his time and energy so that other families of missing people might have hope that their loved ones will be found.

"It's just to give people hope. Really, that's what it's all about — just knowing somebody is out there doing something, trying."