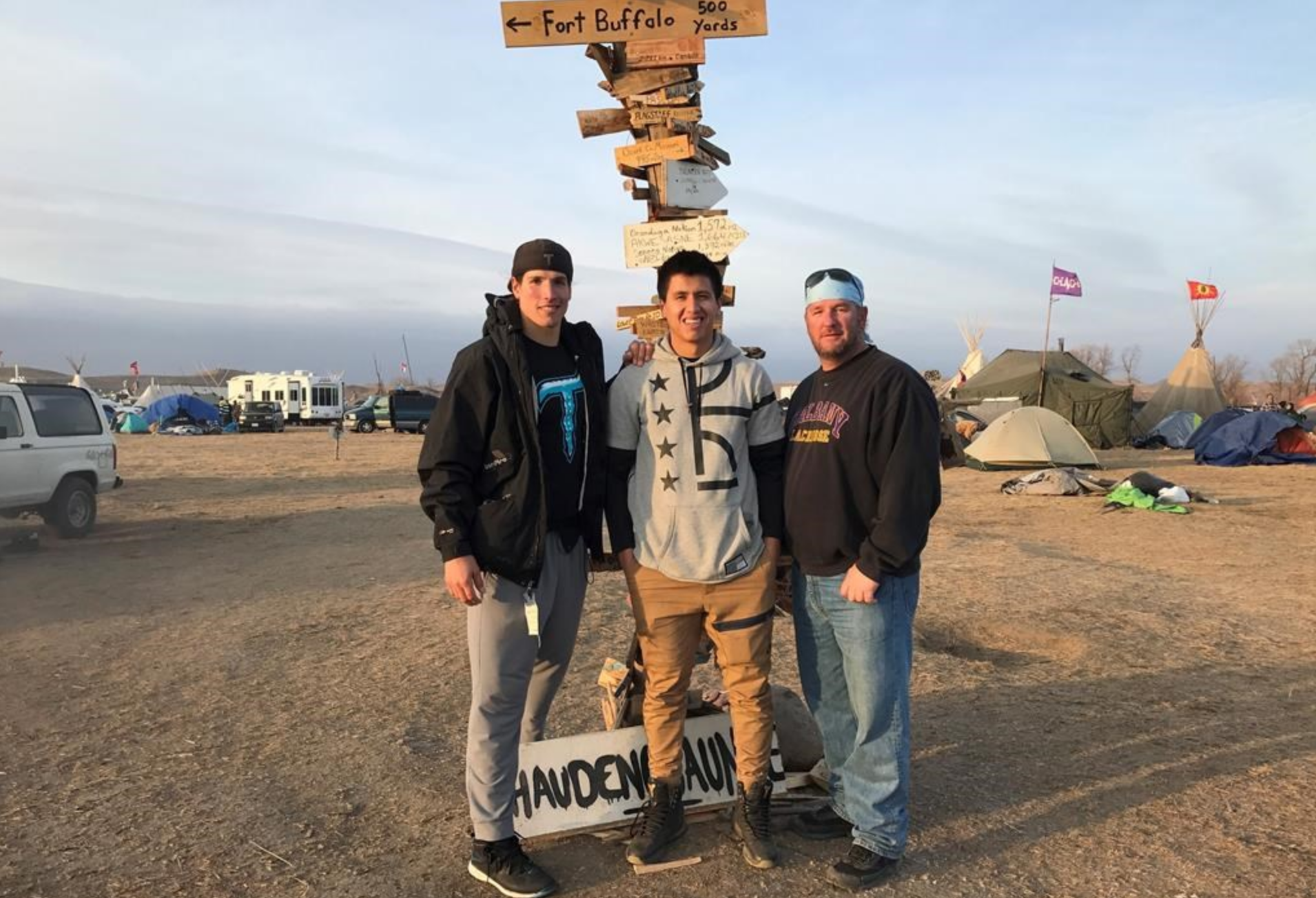 Last week, Lyle Thompson packed up his family, a couple of friends and dozens of lacrosse sticks and drove more than 24 hours from his home in upstate New York to the site of the Dakota Access pipeline protests.

The lacrosse star wanted to see the demonstrations for himself, and he hoped he could lift spirits at the protesters’ campsite through his sport, known by the Iroquois as the "medicine game."

He also brought his wife Amanda, their three daughters, fellow pro player Bill O’Brien and University of Albany head coach Scott Marr to the Standing Rock Indian Reservation near the border between North and South Dakota. The plan was to organize a lacrosse game.

The protests over the construction of Energy Transfer Partners’ Dakota Access pipeline began in the spring. The proposed pipeline would run from the oil fields in western North Dakota to southern Illinois, crossing beneath the Missouri and Mississippi rivers, as well as part of Lake Oahe near the Standing Rock Indian Reservation.

Protesters want to stop the completion of the 1,886−kilometre pipeline because of the potential effects on drinking water on the reserve and farther downstream on the Missouri River, as well as the possible destruction of cultural artifacts, including burial sites. The Standing Rock Sioux also claim that the land near the confluence of the Missouri and Cannonball rivers is owned by them under a nearly 150−year−old treaty.

Tensions were still running high after Morton County Sheriff Kyle Kirchmeier said authorities would use the fire hoses again if necessary. Human rights organization Amnesty International had denounced officers’ use of water when temperatures were below freezing.

After addressing the protesters at the community bonfire, Thompson walked around the campsite to personally spread word of a lacrosse game he was organizing. Despite the violence less than 24 hours earlier, he was struck by the generosity of the demonstrators.

"I went around walking among the tents and telling them that I was going to have a lacrosse game around three o’clock and every tent that I stopped at, a woman would come out and offer me food and a coffee," said Thompson, who described the experience as eye−opening. "To me that was something really cool, it was something where everyone was looking out for each other and on the same team."

The Iroquois, who refer to themselves as the Haudenosaunee, created the sport of lacrosse, believing it has both physical and spiritual healing properties.

Thompson, who plays professionally for the National Lacrosse League’s Georgia Swarm and Major League Lacrosse’s Florida Launch, hoped to tap into that tradition at the protest site. More than 16 people, including Caucasian, African American and First Nations players, joined Thompson, O’Brien and Marr on a field that had wooden posts as goals.

"It was really kind of a spiritual experience, to be a part of the traditional sense of the game, playing for a cause, playing for a purpose, rather than playing for a win or a loss in a collegiate game," Marr said. "It was really deep to be part of something like that. You were trying to play for the healing of the people that were there and what’s going on at that reservation."

Thompson said he wanted to go beyond the negative headlines and bring attention to the peaceful, community−oriented side of the demonstrations.

"I’m going to help, do what I can, and the reason for that is because, it’s not every day that someone’s in my position," said Thompson, who spent a little over two days at the campsite. "I’m a Native American who has an opportunity to leverage themselves and help a bigger cause. I feel like I’m in a position to help people and I’m going to do that. I’m not just going to let it slide by."

By Nadia Prupis | News, Energy | September 4th 2016
Reports from the Race to a Safer World

Good for you, young fella!

Good for you, young fella! Keep up the good work there! At 83 years old and an ex lacrosse player I'm a little old to join you, but I'm with you in spirit.