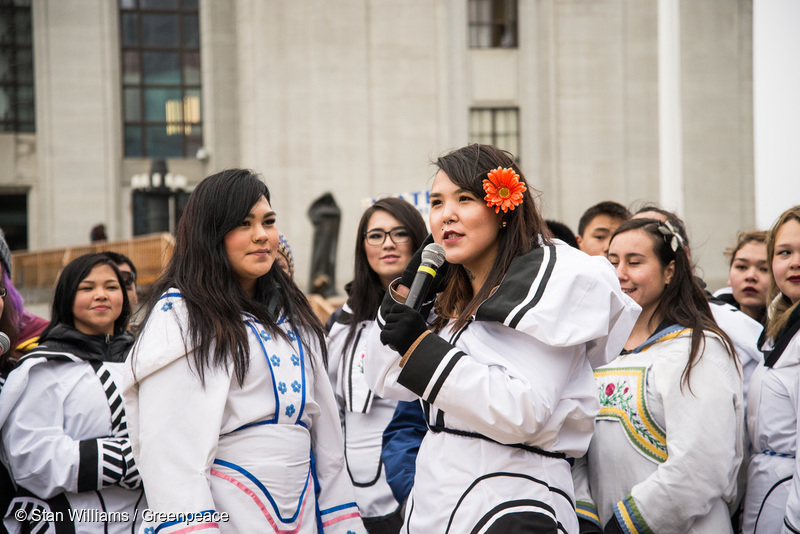 Nunavut Sivuniksavut students perform at a rally outside the Supreme Court of Canada in Ottawa on Wednesday. Photo by Stan Williams/Greenpeace
Previous story
Next story

As dawn broke last Wednesday, more than 200 supporters of two indigenous groups challenging energy projects at the Supreme Court of Canada gathered on a small, uninhabited island in the Ottawa River, below Parliament Hill.

Shrouded in a light grey fog, they stood silently around a small open pit fire while Algonquins from local First Nation Kitigan Zibi conducted a sunrise ceremony of prayer, smudging and tobacco offerings. The mood was somber, but not oppressively so.

“Wednesday was quite an emotional day,” said Jerry Natanine, former mayor of Clyde River. Earlier in the week, Natanine travelled more than 2,800 kilometres from that tiny coastal hamlet in Baffin Island to witness his community’s day at the Supreme Court in Ottawa.

“We don’t do any smudging like that traditionally in the North,” Natanine told National Observer. “That was really good for me. It was so good.”

Less than an hour after the ceremony, around 8 a.m., some Inuit of Clyde River, Anishinaabeg of Deshkaan Ziibing (known as Chippewas of the Thames First Nation), their lawyers and spectators filed into the Supreme Court. Within an hour they filled the courtroom and three overflow viewing areas.

Is it consultation if the federal government isn't there?

The Supreme Court is examining challenges by the two groups to the federal government's assertion that the Crown's duty to consult with First Nations may be adequately fulfilled by the federal energy and pipeline regulator, the National Energy Board (NEB).

If successful, the legal challenges could overturn NEB project approvals issued in 2014. The Clyde River case is against seismic testing for oil off the coast of Baffin Island and Deshkaan Ziibing’s case involves Enbridge’s Line 9 oil pipeline expansion project in Ontario and Quebec.

Success at the Supreme Court could also give First Nations legal ammunition to challenge two pipeline projects in Western Canada— Line 3 and Trans Mountain — approved by Prime Minster Justin Trudeau last week. All of the projects have also been facing heightened attention in recent weeks in the wake of recent confrontations in North Dakota surrounding construction of the Dakota Access pipeline.

The struggle of the Standing Rock Sioux Tribe to protect their traditional territory has also inspired other Indigenous communities in the continent to persist with their own battle in the courts. At a rally outside the Supreme Court on Wednesday, Deshkaan Ziibing and Clyde River supporters carried dozens of handmade placards with the words "water is sacred" — one of Standing Rock's main protest slogans — painted on.

Lawyers for Deshkaan Ziibing and Clyde River argued on Wednesday that since the Canadian projects in question could have an impact on their aboriginal and treaty rights the federal government had a legal duty to consult them. Furthermore, the consultations should have taken place prior to the projects approvals. Aboriginal and treaty rights to hunt, trap, harvest and fish on traditional territory are enshrined in Section 35 of the Canadian constitution.

After seven hours of nearly uninterrupted lawyers’ arguments and questioning by Supreme Court justices on the two cases, the somber mood had returned. But this time it was accompanied by uncertainty. Many of those who came to support the plaintiffs left the courthouse unsure how the Supreme Court would rule in coming months.

Either way, the decision could have profound implications on natural resource development in Canada.

“If we get a yes, that tells me that the highest court of Canada is going to send a message to the Crown that this is what the constitution is asking you to do, that there is an honour of the Crown to consult and that it didn’t happen,” said Chief Leslee White-Eye of Deshkaan Ziibing, a southwestern Ontario First Nation.

“I think that alone will send a big strong message to the Crown that they have to do things differently,” White-Eye told National Observer. “Then real work begins after that, right?"

Hayden King, a public policy professor at Carleton University, sat in on the Court’s proceedings. “I am afraid the duty to consult can be narrowed so First Nations, Inuit, Indigenous peoples generally are reduced to limited interaction with the Crown moving forward,” King told National Observer.

Is consultation by the National Energy Board good enough?

Determining what the constitution requires is the issue before the Supreme Court. The duty to consult with Indigenous peoples on projects with the potential to infringe on their rights is the obligation of the Crown, according to legal precedents.

“I’m going to come back to a question I asked before: who is the Crown? And is not the Crown the NEB for the purposes of its jurisdiction?” asked Justice Malcolm Rowe.

“The Crown may rely on the Board’s process and the consultation that is carried out under it to satisfy even a deep duty of consultation,” Mark R. Kindrachuk, lawyer for the Attorney General of Canada, told the Supreme Court.

That interpretation of the duty to consult was supported by other respondents in the cases —the National Energy Board, Enbridge and Petroleum Geo-Services Inc. — and interveners including the Ontario and Saskatchewan governments.

King said no matter how the Supreme Court rules, there is a definite danger of Indigenous people being treated as mere stakeholders if the justices agree with this interpretation of the duty to consult.

Lawyers for both Clyde River and Deshkaan Ziibing argued the Board lacked the authority and expertise to adequately assess and consult on aboriginal and treaty rights.

Hasan told the Supreme Court that the federal government owed Clyde River a duty of “deep consultation” because of the impacts seismic testing could have on the marine mammals that the Inuit rely on for their livelihoods. Supreme Court justices questioned Hasan multiple times on whether the federal government needed to be present for deep consultation to have taken place. Hasan’s answer was an unequivocal yes.

“I accept your point, not sure how I feel about it,” Justice Rosalie Silberman Abella said during an exchange with Hasan. “If there wasn’t somebody there, what was there about this that didn’t reach the necessary constitutional threshold of meaningful consultation? ... What didn’t they do that they should have done other than have a federal Crown representative there?”

After the hearing, Hasan said he was not concerned about the grilling he received from the justices.

“They asked me a lot of questions, but that’s their job,” Hasan told National Observer. “I think we had a fair hearing. And that’s all we can ask for.

"Enbridge is absolutely committed to fostering a strengthened relationship with the Chippewa of the Thames First Nation built upon openness, respect and mutual trust, and to working through outstanding issues to find mutually agreeable solutions. We will continue our efforts to engage with Indigenous communities above and beyond what is required by regulators to build trust and address any concerns or input they may have with our projects or operations," wrote Ivan Giesbrecht, Enbridge's media relations strategist.

In a legal factum on behalf of the proponent companies in the Clyde River case, Petroleum Geo-Services Inc. stated that "this Court’s decisions have made it clear that the Crown is allowed to rely on existing statutory processes to satisfy its duty. Therefore, the Proponents respectfully submit that the only real question on this appeal is whether the NEB’s process did so. The Proponents respectfully submit that it did."

Editor's note: This story has been updated to correct a quote from Nader Hasan, the lawyer for Clyde River. He said "justice is on our side" and was not referring to the justices of the Supreme Court. National Observer regrets the error.

I hope this is a game-changer

I hope this is a game-changer for Indigenous peoples in Canada.

I hope this is a game-changer

I hope this is a game-changer for Indigenous peoples in Canada.