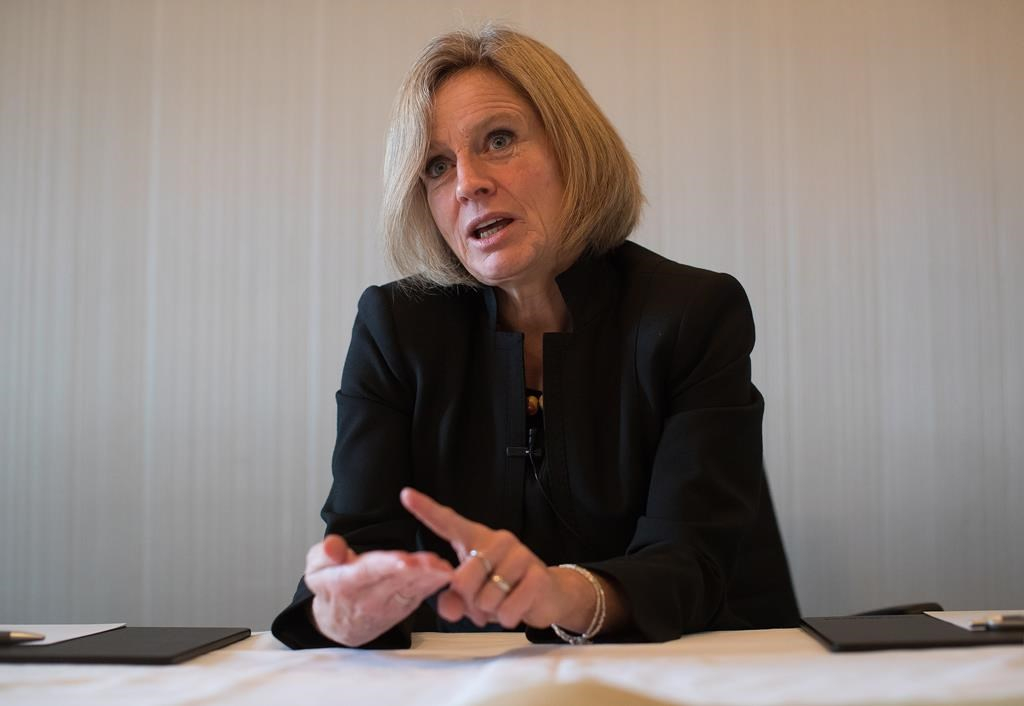 Alberta Premier Rachel Notley sits down for an interview in B.C. on Dec. 6, 2016, where she was promoting the Kinder Morgan Trans Mountain expansion pipeline. Photo by the Canadian Press
Previous story

Her support of Kinder Morgan Canada's $6.8-billion Trans Mountain pipeline expansion has put her at odds with British Columbia's Opposition NDP Leader John Horgan, and on Tuesday she declined to endorse a candidate in the province's upcoming election.

"I'm not going to engage in political punditry in the province of B.C. The provincial election is the forum of British Columbians," she said in an interview with The Canadian Press on Tuesday.

"I am just committed to working with whatever government is in place to encourage them to move this project forward, to the extent that it's within their jurisdiction to do so."

Notley is set to meet later this week in Ottawa with B.C.'s Liberal Premier Christy Clark, who has said the five conditions she outlined to support the Trans Mountain expansion have almost been met.

Given the provincial NDP's opposition to the Trans Mountain project, Notley is in the unlikely position of being closer to agreement with Clark than with her provincial party's counterpart in B.C.

Horgan tweeted on Tuesday: "Agree w/ my friend Premier @RachelNotley on so much but fundamentally disagree on #KinderMorgan."

Agree w/ my friend Premier @RachelNotley on so much but fundamentally disagree on #KinderMorgan. #bcpoli

Notley, who was in B.C. promoting the pipeline, said she's known Horgan for years and they met Monday because it was important for her to touch base with a fellow NDP leader.

The two discussed their opposing positions on the project and ways to have civil conversations moving forward as they continue to disagree, she said.

"The NDP is a big family. This is not the first time that different (leaders) have had to take different positions as a result of their provincial interests," she said. "I don't expect to change his mind."

The expansion would triple the capacity of the existing pipeline, which runs from near Edmonton to Burnaby, B.C., and increase tanker traffic seven-fold.

Notley met with media outlets on Monday and Tuesday but did not have any public speaking engagements.

She chuckled when asked about Weaver's challenge.

"I'm sure an Opposition member would love the platform of debating a premier from another province, but it's not in my job description to engage with Opposition members who are in the midst of electioneering."

She said the meetings with journalists were "the easiest way to talk to the greatest number of people" in the brief time she had in B.C. But she said her work isn't done promoting the project.

Notley said she didn't see any contradictions between her role as a New Democrat and her endorsement of an expansion of infrastructure to transport oil from Alberta's oilsands.

Fundamental NDP values support reducing climate change while also creating and protecting jobs, and the pipeline project strikes the right balance between the two, she said.

"You can't do a transition and throw people callously to the curb, and say, 'Oh well, they're the unintended consequences.' That's not a good way to move forward."

She said Canada must move toward a greener economy and Alberta's Climate Leadership Plan is the "most ambitious" of any jurisdiction in the country, with a carbon pricing regime, a cap on oilsands emissions and a phase-out of coal.

But she noted Canada's exports are still 20 per cent oil and gas. Yet the country is discounting its product by only selling it south to the U.S., its biggest competitor, she said.

"We can't turn it off overnight. But as it is, as the market slowly decreases or the world looks for greener forms of fuel, we need to get the best price. We're not doing that right now."

Nike FuÃŸballschuhe 2017 Mit Socken
One of the most relaxing points that you can do is a crossword puzzle each morning. As opposed to watching television, challenge your mind the minute that you get out of bed. This can not simply help you get your thinking off your problems but allow you to sense accomplishment too.

Do not forget that smoking cessation is really about replacing one particular actions with yet another. For most of us, it is mainly the actual respond of smoking cigarettes that is the major pull. It signifies "me time" and a crack coming from a frantic plan or perhaps a uninteresting job. Choose before hand exactly what behavior you can expect to substitute those smoking cigarettes minutes with, and then get it done!