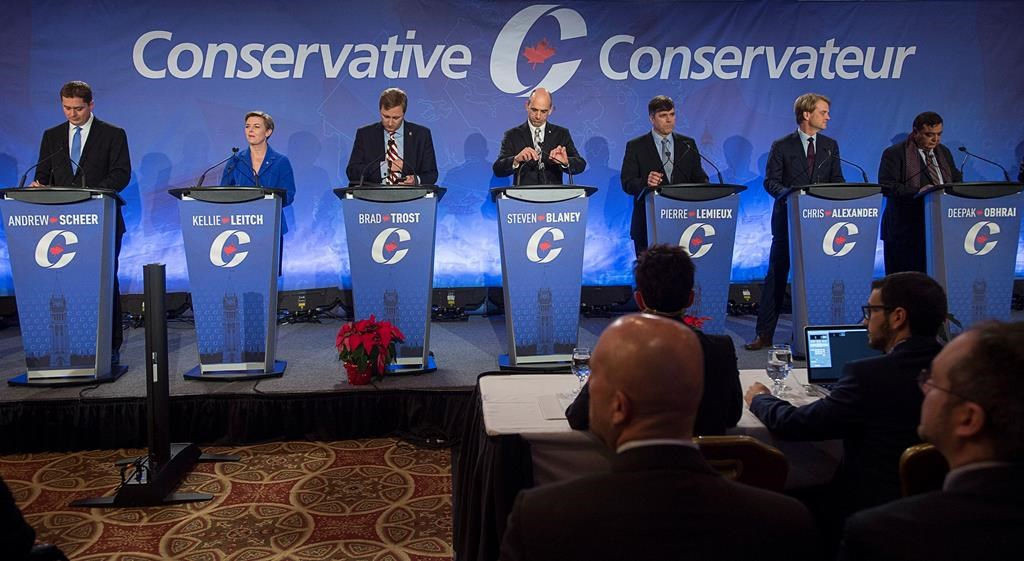 No fewer than 14 candidates crowded the stage in Moncton for the second official debate of the federal Conservative leadership race where they discussed a broad menu of issues ranging from the economy to crime to pipelines.

Stationed behind monogrammed podiums emblazoned with the party logo, the candidates began with a rapid-fire series of 30-second opening statements — many of them punctuated with mediocre French.

The leadership contenders were then asked about improving the criminal justice system before the questions turned to matters of infrastructure and economic growth — in particular the controversial Energy East pipeline project.

Michael Chong called for a strategy that would both reduce greenhouse gases and result in timely energy project approvals by way of a regulatory process that consults indigenous communities and addresses environmental concerns.

Stephen Blaney stopped the show at one point when he brandished what looked like a fuel bundle for a nuclear power plant while promoting his plan to develop and expand Canada's nuclear energy industry.

Kellie Leitch, who supports Energy East, said she would allow Canada to diversify exports and broaden its energy economy. She has also released a five-point plan for cracking down on energy-project vandals.

The 4,500-kilometre pipeline would cost $15.7 billion and carry 1.1 million barrels of oil per day from Alberta to New Brunswick.

For his part, B.C. businessman Rick Peterson said he would eliminate corporate taxes in their entirety, a move he said would result in an immediate 10 per cent increase in GDP growth.

Much of the debate kept coming back to creating jobs and stopping the exodus of young people from some provinces as they search for work.

"Every person, no matter where you live in this country, actually deserves to have a chance to work and live and grow up in the place in which you were born. Is that to much to ask? I don't think so," said Lisa Raitt.

The debate was relatively bland, but with a few shots at fellow candidates. After Kellie Leitch spoke about her plan to screen immigrants for "Canadian values," Maxime Bernier accused her of playing a karaoke version of U.S. president-elect Donald Trump.

"I think we are open to immigration and we don't need this karaoke version of Donald Trump," Bernier said.

Still Leitch said people like her ideas about immigration, capping government spending and allowing women to use mace and pepper spray to defend themselves.

"Even if the media is against me. Even if they are really negative. If we stand tall, if we stand strong, we can actually make sure individuals know our message," Leitch said.

Deepak Obhrai got a reaction from the partisan crowd with a jab at the federal Liberals.

"Deficits, high taxes and a culture of entitlement are in the DNA of the Trudeaus," he said.

Tuesday's debate is the first bilingual exchange of the campaign, and only a relative handful of the candidates are fully proficient in both official languages.

Pierre Lemieux, Dan Lindsay, and Erin O'Toole can speak the language a little, with varying degrees of ease or difficulty.

A debate in Quebec City on Jan. 17 will be in French and the remaining two will also be in both official languages.

Alexander is a fluently bilingual candidate who was recently criticized for not doing enough to stop what happened at a rally in Edmonton over the weekend, when some people in the crowd chanted that Alberta NDP Premier Rachel Notley should be thrown in jail.

The chant of "lock her up," an echo of U.S. president-elect Donald Trump's campaign rallies, came as Alexander was speaking about Notley at a rally organized by Rebel Media, an online news and right-wing opinion outlet.

Alexander has since said he disapproved of the chants.