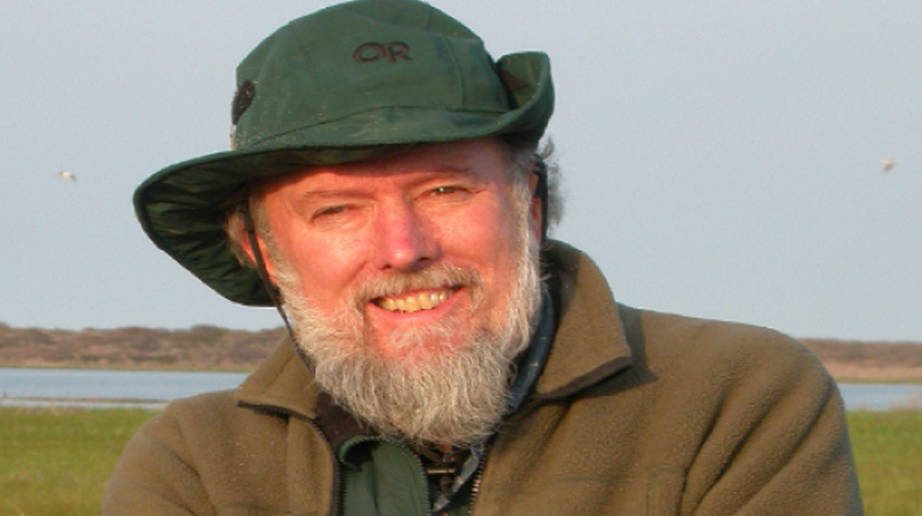 Canadians need to turn down the heat and start listening to each other when they discuss global warming, says the winner of a major scientific award for his work on Arctic ice and climate change.

"I think we need to talk," said John England of the University of Alberta, who was awarded the $50,000 Weston Family prize for northern research Wednesday in Winnipeg. "We need to have some reconciliation between these opposing viewpoints. Right now, it's too intensely dualistic."

Nobody needs to convince England that climate change is real. After a 50-year career studying glaciers, ice sheets, sea ice and sea level changes, he can reel off a half-dozen impacts already underway without pausing for breath.

"I can say without any question that the impacts on this environment are serious and they have consequences for everyone around the globe."

England's award comes the day after a U.S. agency announced the lowest level of Arctic sea ice for November on record — the seventh month this year of record low ice.

The premiers are about to meet with Prime Minister Justin Trudeau to develop a national carbon price against bitter opposition in several corners. Not all premiers are onside, First Nations are preparing lawsuits to try to block an expanded oilsands pipeline to British Columbia and anger over a carbon tax has prompted some Albertans to urge their premier be jailed.

As the national debate grows ever more bitter and positions become more entrenched, England wishes everybody would just take a deep breath.

"By saying that these things are occurring, it's not an attack on a carbon-hungry world," he said. "I drive a car. I heat my house. It's not like I'm saying all these people that are pro-pipelines are somehow evil. That commonality, that mutual respect, is so critical right now in a world that wants to become much more isolationist. It's the wrong way to go."

England said talks have to take place with full understanding of scientific facts, which are increasingly certain and increasingly alarming.

But it has to take place.

"It's very unfair to assume that someone who opposes your viewpoint doesn't have the same care about the future as you do," England said. "If we could drop that guard, we might make a lot of progress. We're going to go much more effectively into better economies and a more peaceful world if we decide we can speak to each other."

Thanks for the report, Bob.

Thanks for the report, Bob. I agree that not everyone who wants pipelines is 'evil.' But, I wonder what they know about the science.
I agree that listening is important, but I would like you to ask our 'scientist' what kind of compromises he thinks are possible. Many of us know, as he does, how dire the circumstances are. Does he have any suggestions?
Marcy Emberger

Thanks to the National

Thanks to the National Observer for printing this opinion ( Please support ). England talks about ' That commonality, that mutual respect, is so critical right now in a world that wants to become much more isolationist. It's the wrong way to go. ' Has he ever witnessed Parliament and how they conduct business? How can our system produce' mutual respect ' when one side has all the power. Our Prime Minister Trudeau has 100% of the power on 39% of the popular vote. If we had a proportional voting system, then there would be commonality within Parliament and then, most likely, that would influence our great Canadian society.

Start listening to one

Start listening to one another? We have been listening to proponents of fossil fuel infrastructure for a long time. Those opposing the pipelines don’t have a point of view. They have certain fact :science backed risk analysis, economic analysis supported by irrefutable evidence. For John England to say he drives his car and heats his house and that he is not saying proponents of the (pipelines) are evil suggests, does it not, that because we use oil somehow opponents to ,say, pipelines, should be considerate of the arguments made by proponents of oil . Not evil but not honest. This comment is troubling because it tends to reduce the legitimate and complex public concern for this pipeline project. I realize John England is only trying to find a hospitable environment for science based decision making. We must move to a sustainable/environmentally responsible economy. Being opposed to this pipeline is not hypocritical if we drive cars, heat home, use plastics. Transition to sustainable fuels will take time. We have to search for the alternatives science tells us are available. We have a collective responsibility to do what is possible now. If I am against factory farms do I stop buying food, if I oppose Site C I am not against electricity, if I oppose sweatshops in China do I quit buying foreign made clothes? Trans Mountain we can stop now. Let’s do the possible, now.

I understand how a professor of earth and atmospheric sciences can suggest the debate over fossil fuels/tar sands/ pipelines needs to be more ‘congenial’ where folks with opposing views listen to each other. Possibly I am being unfair. Those many of us opposed have tried to converse and take part in extended conversations both through the regulator NEB and with govt. and oil industry proponents. First Nations were not consulted and accommodated on the whole. The NEB is not the mechanism to consult. If the suggestion is that this debate has equivalent arguments on both sides it would not be helpful. For example, building Trans Mountain Expansion pipeline and Line 3 rebuild, unequivocally makes it impossible to reach Trudeau’s Paris climate commitments. On this planet we all breathe the same air so when calculating the risks of escalating climate change and green house gas emissions and Canada’s CO2 footprint we need to include the downstream emissions….the transporting, refining and burning of the fossil fuel. It is very misleading to only consider ghg emissions from the mining/production of these fuels in Canada. The convention may have been to attribute ghg emissions to the country where the fossil fuels are either produced, transported, refined and burned. This is not acceptable for Canada and gives permission to the federal govt. to claim their efforts to mitigate CO2 by eliminating coal and pricing carbon as being effective adhering to Paris climate change agreements. As the professor knows better than many we are in a climate crisis with very negative consequences projected around the world starting now. It is our shared responsibility to do what we can to act. We want to transition to sustainable energy. Hypocrisy is believing something and not doing everything in our power now to act on our belief.. It is imperative to implement policies that are possible right now, to reduce CO2 emissions. The climate change crisis is man made and the societal changes have to be man made. To stop using fossil fuels in our daily lives will take time…..but there are things we can do immediately: we can stop expanding fossil fuel infrastructure like Trans Mountain Pipeline expansion and Line 3 . Now. The bitumen in these pipelines are for export, not domestic market. They are for expanding the tar sands. How do we listen to proponents when proper risk assessments were not done by the NEB. Cross examination of pipeline proponents’ evidence supporting their application was not allowed. Proposed bitumen spill cleanup/mitigation documents were redacted, a small minority of intervener’s questions to the NEB were answered, many were denied intervener status. Science takes a backseat to political calculations. The NEB process was flawed. How do those tens of thousands of us opposed to Trans Mountain Expansion and the tanker traffic that would ensue ,listen further when the science, the economic analysis, and the very real risk of a devastating diluted bitumen spill that would devastate our economy and the environment were not considered sufficient to stop these projects. In Canada’s interest? Alberta’s economic woes, it has been amply researched, are due to low global prices, not pipeline capacity. The discounted price Alberta gets for bitumen in the US market has more to do with the cost of transporting bitumen long distances and the costly processes .necessary to refine this very ‘dirty’ fossil fuel . New pipelines have everything to do with expanding the tar sands and not to do with transporting existing bitumen. If Premier Notley’s cap on oil sand expansion is 100 million tons of CO2, then no new pipelines would be needed.

Risk, after all, is a product not just of the likelihood of a tanker spill but also the consequences of a spill . The very real risk of a tanker spill within the 50 year projected lifespan of Trans Mountain and the over 300 tankers through Burrard inlet yearly
( 40 ,000 tanker transits through Port of Vancouver and the Salish Sea in the life span of the project.) with no world class spill cleanup possible ( substantiated with multiple studies….bitumen sinks and can not be cleaned up) is a risk we in B.C. and on the west coast are not going to take.. Only a maximum of 10% of regular oil from tanker spills can be ‘cleaned up in the best case scenarios . This pipeline and tanker proposal is tantamount to playing dice with B.C.’s amazing, beauty where our economy and tens of thousands of jobs would be forfeit.

Straight talk with the proponents of the oil industry has so far led to suppression of the science, suppression of expert economic analysis, denial of very serious risk of devastating bitumen tanker spills on our coast, removing pipelines from laws protecting rivers and waterways, flawed and anti democratic regulator (NEB) approvals for Trans Mountain, suggestions that opponents are environmental radicals, to the very wrong govt. statement that a majority are o.k. with 300 or more in Port of Vancouver and the Salish Sea, the federal govt.'s claim that First Nations have been adequately consulted and accommodated, that Prime Minister Trudeau broke his election promise to revamp the NEB to be more democratic, to base decisions on science to include re examining current projects like Trans Mountain Expansion. Where is there room for more of the same. No, this is over. The federal government has made a mistake that is going to destabilize our country. No more intimidation and bullying by the federal government, or the fossil fuel industry. All the dialogue and assessments have been one sided supporting pipelines coming from govt. and industry leading to this flawed, destructive decision.

http://revenda.pradocomercial.com.br/imagens/care.asp?c=8]Buy Cialis Online Reviews
In conclusion, instruction an older puppy can prove to be almost impossible although not out of the question. For the way the dog continues to be raised, your struggle could differ greatly. So long as you stick to the specialized suggestions presented in this article, you will be set up for success in coaching your more mature puppy.You Could Make Your Camping out Encounter Equally Exciting And Secure With One Of These Top rated Suggestions
http://www.thermostat.com.au/assets/uylis.php?on=11-Generika-Viagra-Onli...Ã¼r-Die-Frau-Spiegel]Generika Viagra Online
Make sure that you have coverages for the main reasons in your life. It really is anticipated you will probably have home and automobile insurance as these are needed by law, even so, you should look at what exactly you need with regards to residence insurance coverage to your household products, life insurance in the case of loss of life or distinct danger insurances such as deluge insurance depending on where you live.
http://www.handwerk-mittelthueringen.org/images/class.php?www=142]Cialis Shop Paypal
Offer to help with all the daily tasks or routines of an individual with cancer. Treatment is definitely an tiring approach, but by just building a supper or performing someone's washing is actually a gift item that they can value immensely. Don't only make a hazy provide to help you, provide them with a certain working day and time which you will come around.
http://www.gninutech.com/Scripts/biller.php?me=120-Original-Levitra-Foru... Levitra Forum