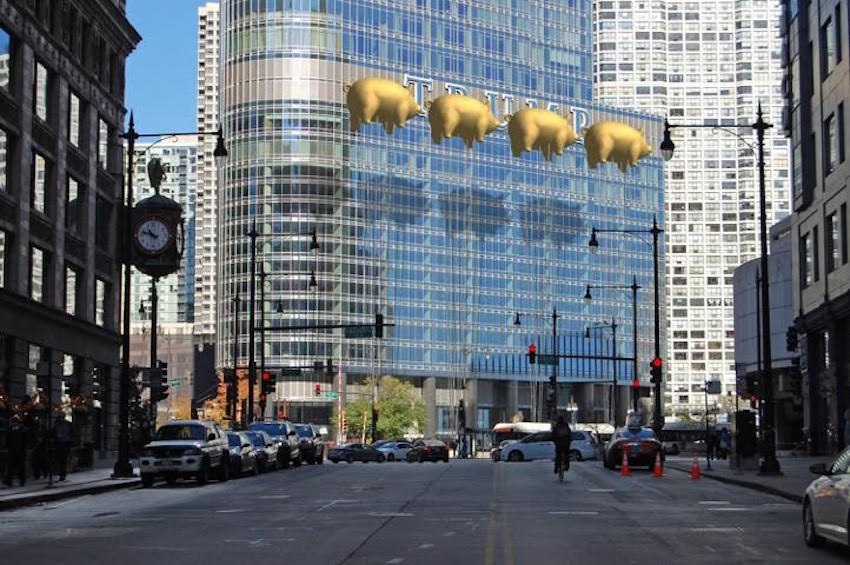 There’s less than two months to go before Donald Trump is sworn in as the new U.S. president and roughly the same amount of time before the grand opening of the Trump Tower in Vancouver.

Some people aren’t happy about either. While there’s not much Canadians can do about who lives in the White House next year, there is a chance we can take matters into our own hands to do something about Vancouver’s new second tallest building.

Take what they’re trying to do in Chicago – a city Trump famously compared to a “war-torn country” and where 83 per cent of voters casted their ballots for Clinton last month. Now that his inauguration day looms on the horizon like one of his own gaudy skyscrapers, an architectural firm in the Windy City has floated a creative idea to help residents and visitors alike cope with the daily reminder provided by one of his hotels.

New World Design is seeking to install four giant golden pig balloons to block the view of the seven-metre-tall Trump sign that hovers above the scenic Chicago River. The proposal aims “to provide visual relief to the citizens of Chicago by interrupting the view of the ostentatious Trump Tower Chicago sign.”

The number of pigs was chosen to represent the years of his first term and plays homage to the cover of the classic Pink Floyd album Animals that features a humongous hog hovering between the two chimneys of the Battersea Power Station.

Simply calling the building something else has already been shot down. An online petition, which included an endorsement from Mayor Gregor Robertson, launched last year requesting the Holborn Group remove the alleged billionaire’s name from the building but CEO Joo Kim Tiah said it was too late and that they are under contractual obligation to keep it.

A massive chrome sign spelling “Trump” in individual letters was installed last summer but has been covered in blue tarps ever since. Since tarps are rarely a long-term solution to anything, we’ve come up with a few other homegrown suggestions for things to block views of the offending name:

There’s already a precedent here. Earlier this year, a Mexican construction worker named Diego Saul Reyna proudly hoisted his homeland’s flag in protest of Trump’s characterization of Mexicans as rapists and criminals and his promise of building a giant wall across the U.S.-Mexico border.

There’s already a gold-painted statue by renowned Vancouver artist Douglas Coupland of Stanley Park's famous Hollow Tree sitting outside a new residential tower at the corner of Marine and Cambie streets. No reason there couldn’t be another one. Plus a golden replica of something dead on the inside and artificially propped up seems strangely fitting.

While the Vancouver Aquarium still owns five beluga whales out on stud loan to marine parks in the U.S., there are none left here at home after Qila and her mom, Aurora, died within two weeks of each other in November. Perhaps giant beluga balloons similar to the Chicago proposal could keep the tourists happy and serve as an alternative to keeping sentient beings in unearned captivity.

Covering the Trump sign with some sort of yellow, cotton candyesque hair weave could also work given the man’s own habit of hiding a source of personal shame with the same thing. He might even approve. Or at least not sue.