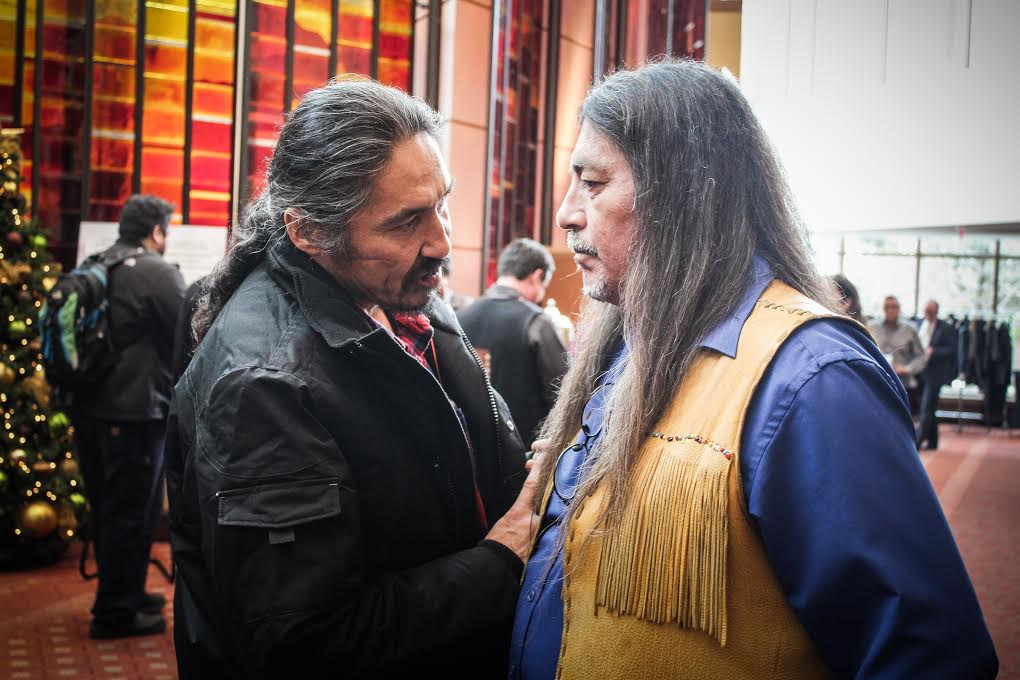 For years, Chief Allan Adam, leader of the Athabasca Chipewyan First Nation, has been labeled an environmentalist.

He has fought hard to investigate mysterious illnesses plaguing his people who live near major oilsands development and other industrial activity in Northern Alberta. He has been an outspoken critic of both governments and industry for not doing enough to protect public health from industrial pollution.

Provincial statistics have confirmed cases of rare forms of cancer in the town of Fort Chipewyan, about 300 kilometres north of the oilsands hub of Fort McMurray. Scientific research has also shown that local food sources contain carcinogens, but federal and provincial governments have repeatedly downplayed such risks.

In a recent interview in Gatineau, Que. with National Observer, Chief Adam said that he has always tried to balance environmental, public health and economic development issues. But he doesn't want to be pigeonholed as an environmentalist.

"I’m not an environmentalist," Chief Adam said. "I love the scenery, I love the land. I love what it provides for me. And I’m grateful because I'm 50 years old and I can still say today that I still live off the land in ways that it’s going to feed my family in small portions (so that) we carry on the tradition. But it’s not going to feed me and my family like it did when I was a kid... that was mainly our diet. So you have to understand (the difference) between someone who is an environmentalist and someone who has concern for human health."

In recent years, the chief has played host to megastar Leonardo DiCaprio and director Darren Aronofsky, among other celebrities, and acted as their guide to the oilsands.

He is leaving the door open to joining other North American First Nations who have signed the "Treaty Alliance Against Tar Sands Expansion" which requires its members to oppose new projects that will lead to radical expansion of the industry. It will depend on whether the people from his First Nation support signing on, he said.

Although many perceive this alliance as being an anti-development effort to stop all new pipelines and shut down production in Alberta's oilsands, home to the world's third largest crude reserves after Saudi Arabia and Venezuela, Adam said the treaty actually promotes sustainable development.

"We’re for development if it’s done in a sustainable, right way that’s going to benefit everybody," he said. "But the fact remains that we can’t keep doing it at the price that we’re paying right now when they continue to bury people back home."

Among the initial signatories to the treaty was the Standing Rock Sioux Tribe of North Dakota, which has been opposing construction of the Dakota Access oil pipeline. The document now has 120 signatories in North America and members hope to recruit some members from Alberta in 2017.

The following is an edited transcript of National Observer's interview with Chief Adam last week in Gatineau, Que. where he was attending a Special Chiefs Assembly, hosted by the Assembly of First Nations.

How do you view the Treaty Alliance Against Tar Sands Expansion and would you sign on?

The treaty alliance is a perfect example of (what happens) when you want to sit down and do things right, because the treaty alliance does not oppose any new development but it opposes old pre-existing infrastructure that is there.

In order to move petroleum products in a viable way where it’s going to be safe and sound, we want to build new infrastructure and say that we’re going to build it to today’s standards, which is going to be protected in more ways than one.

I concur with the fact that it’s a good sound position to be in, but when you talk about (Enbridge's) Line 9 or (TransCanada Corp's) Energy East, (these are) 40-year old pre-existing pipelines already. So there’s nothing in there that’s going to (assure) the people who (live near) that existing line that it’s going to be safe.

They (companies) are cutting corners, reducing the costs... but if they want to build a new pipeline for Energy East, (they should) spend the $9 billion to $10 billion (needed to make it safe). Then at least you’re (ensuring) security from point A to point B, where it’s going to end, because it’s new infrastructure all the way. But if you don't get that new infrastructure down, people are going to oppose.

The critical point at this time, right now, when you talk about critical infrastructure for pipelines, (is) not about developing new ones but replacing old ones. People have to understand they have to be replaced. But the regulatory process of doing it right has to be enhanced to make sure that the environmental standards are (achieving) what they are set out to do.

Is there sufficient oversight on a new pipeline to make it safe?

We need improvements at the NEB (National Energy Board) for new pipelines to get approved. We all know that. The one thing I always keep calling for is we need to sit down and talk about a national energy strategy plan (that includes) a water solution with regards to safe drinking water as well. We have to combine these together....

Do you support the treaty alliance (against oilsands expansion)?

It won't do any harm to us. In more ways than one, I think it will strengthen our position.

I think at this point in time, (whether I consider) signing the treaty alliance, I’ll just wait for the consent from back home, which I'm waiting for.

I have to get permission, right? And I can’t come over here and say I’m going to sign because it’s here. I have to do it in the right way. There are reasons why I wasn't part of the signing when they first initiated (the treaty), so we have to continue on respecting it.

But doesn't the treaty suggest stopping new development and new pipelines? Are you opposed to this, or am I misunderstanding the concept of the treaty?

You misunderstand the concept. They don't want to continue going further ahead with development with the current situation in place. This is what they’re saying. There has to be changes. There’s either got to be changes from viable fossil fuels, new technology or green technology. There’s ample opportunity for everybody and we as First Nations people can’t squander the opportunities that are out there. We still try to build equity and move in that direction of a self-relying nation that depends solely on the economics of what they’re bringing in.

Right now, how does the industry help your First Nation?

We continue to get contracts with the industry. We continue to work with them. We’re trying to find ways of sorting out our issues and moving down this path, which we're doing. We’re not saying that we’re totally against them. We’re for development if it’s done in a sustainable and right way that’s going to benefit everybody. But the fact remains that we can’t keep doing it at the price that we’re paying right now when we continue to bury our people back home.

I’m not an environmentalist. I love the scenery, I love the land. I love what it provides for me. And I’m grateful because I'm 50 years old and I can still say today that I still live off the land in ways that it’s going to feed my family in small portions (so that) we carry on the tradition. But it’s not going to feed me and my family like it did when I was a kid, because that was mainly our diet. So you have to understand one thing (the difference) between an environmentalist and someone who has concern for human health. And that’s the position I’m coming from from — a human health perspective and I’m questioning what is going on in the environment that is a burden to our health. If you cannot answer the questions that I have in health, correct the problem that’s going on in the environment. That’s going to fix the health crisis that we’re having.

I'm assuming from this

I'm assuming from this article that draining the tar sands is ok as long as it's done safely and the money is spread around. Climate change isn't in the equation. That's what I'm reading into this excellent interview.