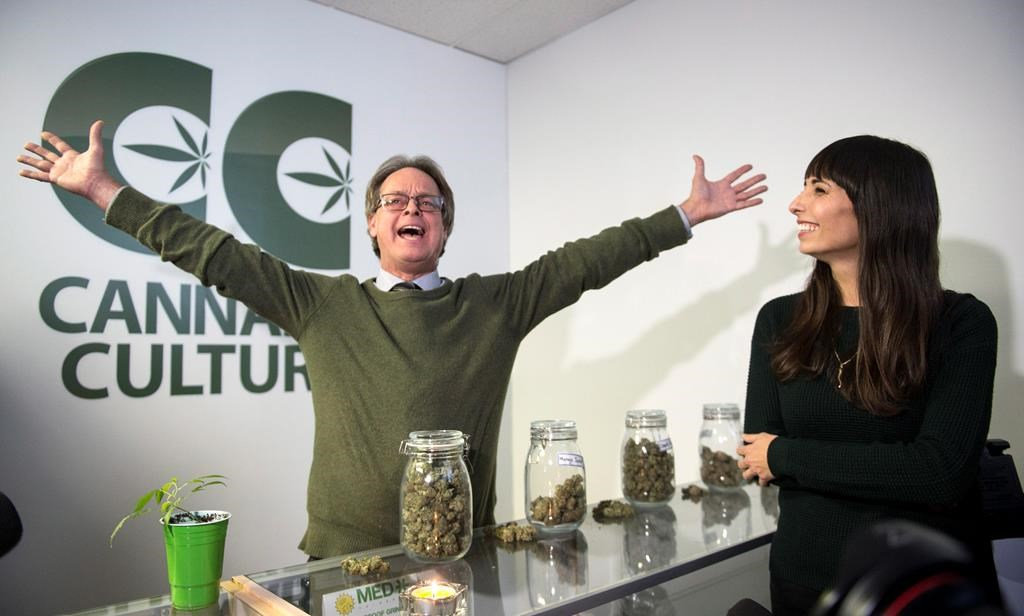 Marc and Jodie Emery urged authorities, at a Dec. 15, 2016 news conference in Montreal. Photo by The Canadian Press
Previous story
Next story

Denis Coderre tweeted the city would use any administrative tools at its disposal to enforce the law.

The pot boutiques opened in the presence of two well-known marijuana activists from Vancouver behind the Cannabis Culture stores and brand.

Storefront outlets are popping up as Ottawa forges ahead with plans to legalize marijuana, with legislation expected in the spring.

Jodie Emery told a news conference at one of the stores that while they are illegal under current federal legislation, she hopes local authorities will leave them be.

Under store policy, anyone 19 and older will be able to buy marijuana, without membership or medical requirements. The shops will pay taxes, employ locals and won't allow children inside.

"This is what legalization looks like, this is what marijuana legalization should be," Emery said. "I beg the Montreal police, let us be in peace. Please do not cause harm to the harmless people that are choosing to work here and push forward this very important issue."

She was accompanied by her husband, Marc Emery, the self-styled "Prince of Pot" who was extradited in 2010 to the United States, where he pleaded guilty to selling marijuana seeds and was sentenced to five years in prison.

"Marijuana prohibition has never been legitimate, there has never been a reason offered for why this law exists, why it's existed for 50 years," he said.

"Anyone who enforces this despicable law is indeed a despicable person — and I include politicians, elected officials, police authorities and anyone else who thinks we should be arrested."

Coderre wrote that he spoke to mayors of several boroughs where the Cannabis Culture shops were opening and that they agreed current laws must be respected.

Montreal police haven't said what they plan to do about the shops but have stressed such operations are currently illegal and that they could intervene.

The openings had been teased for weeks on social media and several dozen people piled into one of the boutiques Thursday looking to purchase marijuana.

While the stores were only expected to begin selling later in the day or Friday, Marc Emery ensured eager customers didn't leave empty-handed as he paid for buds given to customers who packed into the shop.

Some were keen to return, even if the shops are considered illegal.

"It's what people want — if the prices are the same as on the street, you don't have to wait 45 minutes for a guy at the metro (subway)," said Jonathan, who wouldn't give his family name. "It's not sketchy. You buy it (in the shop) and go home, the same way you would your beer."

Antoinette Cole came by after hearing from friends about the opening.

"I would definitely come back, it seems really nice, it seems clean, it seems safe," Cole said after getting her pot. "And the prince of cannabis is here. Why wouldn't you come back?"

Jodie Emery says the Montreal locations are being backed by one principal investor who prefers to remain anonymous.

She says franchisees are interested in opening in Ottawa, Halifax, Calgary in the coming months.

Emery added that two additional Montreal locations are to open by the end of December, adding to the dozen shops operating currently in British Columbia and Ontario.

Quebec Premier Philippe Couillard was asked about the stores as he held a news conference in Montreal with his Ontario counterpart, Kathleen Wynne.

"If they are illegal, they must be punished," he said. "That's the first thing.

"But we're on the eve of the legalization of the product in Canada...and it is crucial that we see very soon what the federal government is planning."

Couillard said Quebec's Public Security Department is looking into the stores to determine whether they are legal.

"We don't want to send a message that is contrary to the ultimate goal, which is legalization," he said. "But we don't want laws to be flouted, either."