Opinion: 'A desperately-needed energy revolution is at hand' 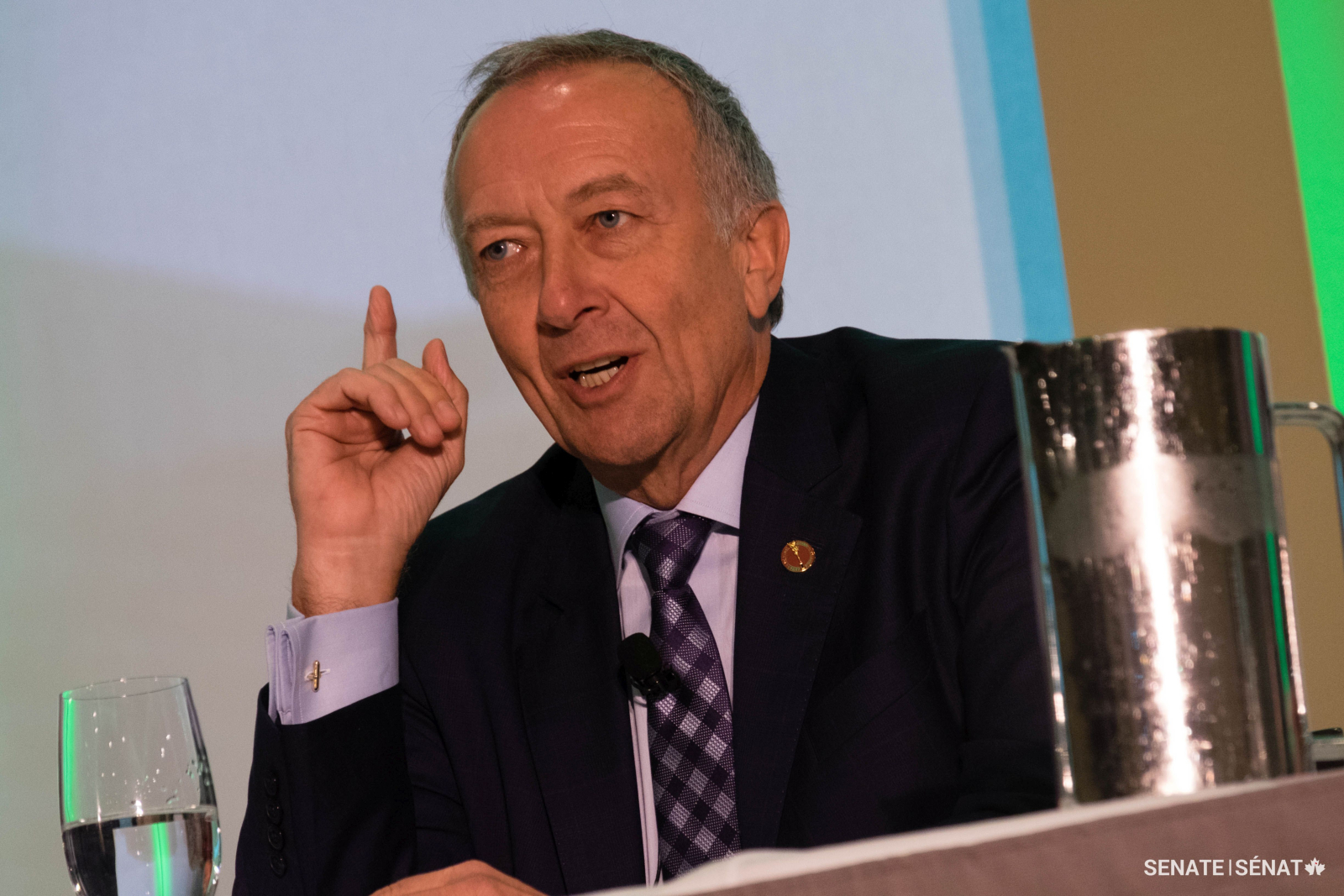 Senator Paul J. Massicotte speaks of opportunities presented by biofuels during a panel at the Renewable Industries Forum in Ottawa on Nov. 29, 2016. Photo provided by Senate of Canada
Previous story
Next story

For generations, Canadians have prospered from industrialization and the booming economics of carbon-based energy, such as coal, oil and natural gas. Burning fossil fuels has allowed industrialized nations to produce energy and grow their economies in ways they’d otherwise never be able to do.

But now, a desperately-needed energy revolution is at hand. Carbon is affecting our environment by getting trapped in our atmosphere, leading to increases in global temperatures. New sources of renewable energy are needed to protect what we now know is a vulnerable climate.

There’s no doubt anymore about whether climate change is real. We know it’s real. We know what we have to do. We don’t have the luxury of not taking action.

A lot of skepticism surrounding renewable energy comes from poor government management of this transition, leading to costly waste for taxpayers and layoffs from our current energy industries.

But this necessary transition could take place far more smoothly and in a way that would allow Canadians to reap more benefits.

Last spring, as deputy chair of the Senate Committee on Energy, the Environment and Natural Resources, I helped initiate a study to examine the best ways to help Canada move toward a lower carbon economy — toward an economy that burns fewer fossil fuels and therefore helps Canada reduce its greenhouse gas emissions.

The committee work includes public hearings, with the intention of making recommendations to assist the federal government in meeting its carbon reduction objectives in a way that is sustainable, affordable, efficient, equitable and achievable. The study will be completed no later than September 30, 2017.

The committee plans to study the five sectors responsible for producing the most greenhouse gases: electricity, transportation, oil and gas, buildings and emission-intensive, trade-exposed industries such as the aluminum and pulp and paper industries. A key feature of this study is to identify and report on the potential costs and impacts of the transition on Canadian households and businesses and how to best minimize them.

So far, a lot of our focus has been on the transportation sector, which accounts for nearly a quarter of all emissions in Canada.

There is no doubt that we’ll have to address and reduce emissions from our vehicles to help Canada meet its commitments under the 2015 Paris Climate Accord to reduce greenhouse gas emissions to five per cent below 2005 levels by 2030.

Focusing on vehicle emissions presents a tremendous opportunity to get the wheels of the transition in motion.

Biofuels represent a low-cost way of reducing transportation sector reliance on fossil fuels, which result in greenhouse gas emissions, and moving toward a more intensive use of cleaner-burning fuels made from organic matter, such as corn-based ethanol.

We have seen success in blending ethanol and biodiesel for road transportation, for marine and aviation modes — which have limited fuel substitution options — and for locomotives.

Moreover, biofuels are also an option for fuels used for home heating and in heavy industries.

So the biofuels sector has to expand.

Despite the thousands of jobs already created by biofuels in Canada — about 14,000 since 2007 — we still consume more of these new energy sources than we produce, and are forced to import from the United States.

That means we’re supporting jobs, growth and innovation south of the border.

The good news: Canada has abundant supplies for biofuels, known as biomass, and technical expertise. We have a real opportunity to become a world leader in biofuels. The world is going to need our biomass.

We must encourage the private sector to make the capital investment needed to convert biomass into energy and bring it to market. As world demand for greener sources of energy grows, Canada should be well positioned to supply this new market.

Senators are well placed to look at such long-term initiatives and do the hard work, listening to what Canadians really need in addition to what the experts recommend — politics aside.

When it comes to combating climate change, Canada’s transition to a lower-carbon economy is vital. Seizing the opportunity to use more renewable energy sources is a responsible approach to reducing Canada’s greenhouse gas emissions. After all, we have to get there and we have to get there in a hurry.

Paul J. Massicotte is a senator representing De Lanaudière, Quebec. He is deputy chair of the Standing Senate Committee on Energy, the Environment and Natural Resources.

To reduce GHG emissions, governments not only have to work at reducing emissions on the supply side but also on the demand side. In 2014, the transportation sector was the second largest emitter of GHG emissions in Canada at 171 Mt (CO2 eq) after the oil and gas sector (192 Mt), or roughly 23% of all Canadian GHG emissions.
The largest source of transportation emissions was from passenger transportation, including passenger cars, light trucks, aviation, bus, rail, and motorcycle. In 2014, passenger transportation accounted for 55% of total GHG emissions from the transportation sector, or 95 Mt. Emissions from passenger aviation, bus, rail, and motorcycle have remained largely flat at 9 Mt from 1990 to 2014. Despite "improved fuel economy and emissions standards" in most vehicles, the growing trend of "consumer preference" for SUV's and light trucks has resulted in GHG emissions from light trucks more than doubling, from 22 Mt in 1990 to 50 Mt in 2014, "which as more than offset reductions in passenger car emissions from 52 Mt in 1990 to 36 Mt in 21014".
Emissions from freight transportation, at 68Mt or 40% of total transportation sector emissions in 2104, have grown significantly since 1990... emissions from freight trucks have more than doubled, from 24 Mt in 1990 to 55 Mt in 21014. Despite generally being the most energy-intensive and highest-cost mode of freight transportation, moving freight by truck has increased in recent decades as a result of "increasing consumer demand for manufactured goods, just-in-time production models, and door-to-door delivery to consumers".
(source: NEB Market Snapshot: Increased GHG emissions from the transportation sector reflect major consumer and business trends, 2016-07-14)
In 2104, a record 65% of new vehicles sales were trucks and the gap between sales of cars and truck sales keeps growing. One reason is probably due to the low cost of fuel; another reason is light trucks sales is more profitable for automobile producers. On television and in newspapers, consumers are constantly bombarded by pickup trucks publicity.
Education on the negative effects of automobile pollution (idling is a big problem as pollutants coming from the pipe are at their highest level when vehicles are idling) don't work. A higher price on fuel and higher taxes on gas-guzzling vehicles are the only incentives that make people change their consumer habits.

My comment is very brief. It is wonderful to see a representative of Canadian government reporting in National Observer. Thank you Paul. I have never seen this before and can only hope this is just the beginning. Bravo!