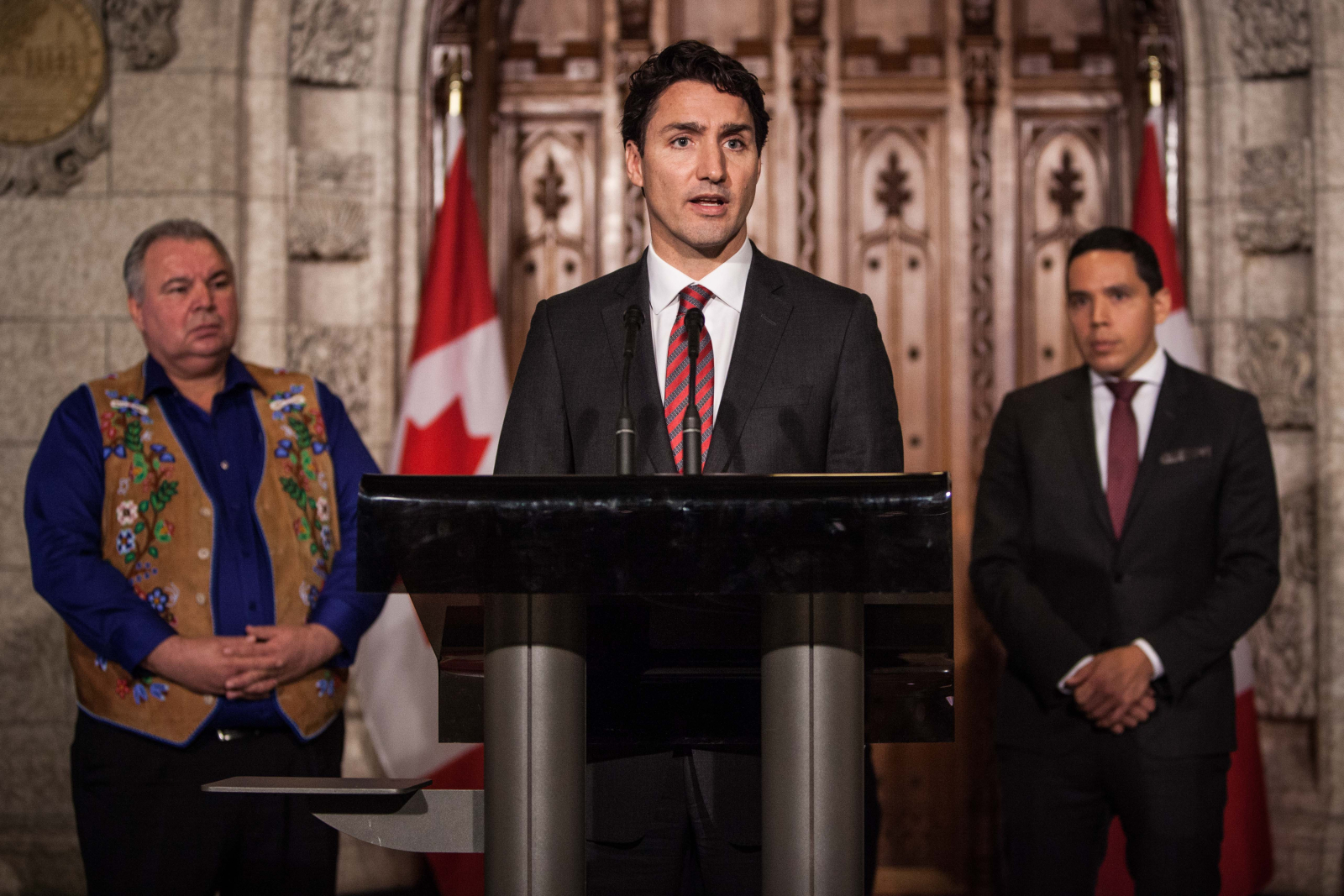 After excluding them from a critical discussion on indigenous people and climate change earlier this year, both the Native Women’s Association of Canada (NWAC) and the Congress of Aboriginal Peoples (CAP) hoped it was a mistake Prime Minister Justin Trudeau would not repeat.

But one week after his second annual meeting with First Ministers and indigenous leaders on clean growth and climate change, the two national aboriginal organizations have been disappointed again.

“I don’t think it’s a tough decision for the prime minister to have two more representatives sitting at the table,” NWAC president Francyne Joe told National Observer. “He states he’s a feminist, he states indigenous relations are high priorities for his government, and yet he’s specifically excluding a national indigenous group that has been recognized by the courts. Why?”

A pattern of exclusion

Both NWAC and CAP have been considered among the five major organizations representing aboriginal people in Canada since the days of the Kelowna Accord, along with the Assembly of First Nations (AFN), the Métis National Council (MNC), and the Inuit Tapiriit Kanatami (ITK).

Only the last three however, were granted an audience with Trudeau and the premiers during climate discussions in Vancouver in March, and again, in Ottawa last Friday. NWAC and CAP were also left out of a meeting on advancing reconciliation with the prime minister on Thursday that was attended by leaders of AFN, ITK, and a Métis representative from Manitoba.

Joe of NWAC was baffled Trudeau could even consider having a conversation about reconciliation without a single indigenous woman at the table, but in a press conference after the meeting, the prime minister confirmed their exclusion was deliberate. He further offered no specific explanation as to why CAP and NWAC weren’t invited.

“My answer is that we always have to make choices about who to include in different venues and at different points,” Trudeau told National Observer. “We continue to engage, listen and talk with and work with a broad range of organizations and stakeholders on important issues. We will always continue to but in any given meeting we have to make choices and we made those choices.”

The exclusion is particularly shocking, given that both CAP and NWAC were flown at the invitation and expense of the federal government to COP22 climate conference in Morocco just last month, and this time last year, Trudeau included them in a ceremony presenting the Truth and Reconciliation Commission's final report on the legacy of residential schools.

The inconsistency is cause for concern, said Joe, as is the pattern of exclusion that appears to have formed since then.

Rights and titleholders at the table

The Ministry of Indigenous and Northern Affairs declined to comment on this story, but after the press conference, AFN National Chief Perry Bellgarde offered some personal perspective on the government’s decision not to invite CAP or NWAC to meetings on climate and reconciliation. The prime minister is obligated to have those discussion with indigenous rights and title holders, he explained, and that’s precisely who AFN, MNC, and ITK represent.

“Any time you start to talk about rights and title, and being representatives of nations and governments — that’s who we are, and rightly so,” he said. “We support that action and that decision going forward. The Assembly of First Nations — the 634 chiefs represent all their people on and off reserve. We always say that’s the first order of government, to represent everybody, youth, women, men and elders on and off the communities… That’s why we’re here.”

A unique stake in the discussion

Both CAP and NWAC however, fundamentally disagree with the argument that their interests as rights and titleholders can be adequately represented by the other three national aboriginal organizations alone. They each represent a unique population of indigenous people in Canada; non-status Indians and indigenous people living off-reserve in the case of CAP, and 13 native women's organizations from across Canada in the case of NWAC.

In April, a Supreme Court decision ruled that 600,000 Métis and non-status Indians were indeed “Indians” under the Canadian Constitution, and without including CAP or NWAC, said Bertrand, the concerns of hundreds of thousands of indigenous people across Canada will fall upon "deaf ears."

According to a recent report by Health Canada, some Canadians are more exposed than others to the health risks associated with climate change, particularly northern residents, children and seniors, and those who are chronically ill, homeless, low income, or living off of the land.

Indigenous people, especially women and girls, fall into many of these categories, and some even fall into all of them. Roughly 17 per cent of aboriginal women live in poverty, face food insecurity, and struggle to access the public services that could help them, according to a 2012 report by Aboriginal Affairs and Northern Development,

“Indigenous women have been experiencing gender oppression within not just Canadian society, but within our own aboriginal societies,” said Joe of NWAC. “So sometimes I think our views are not going to be as well-represented by these male-dominated indigenous groups.

“If you have an aboriginal woman who has lost her right to status because of the Indian Act’s sex discrimination or her mother married off-reserve, never once did that aboriginal woman give up her indigenousness, interest or rights being represented by these groups, and yet these groups do not consult her on the issues that are going to affect her and her children.”

Invited to Morocco, but not First Ministers

Both CAP and NWAC were invited to attend the COP23 climate conference in Morocco this year by Environment and Climate Change Canada (ECCC), and were flown to the conference on the government’s dime. Neither Joe nor Bertrand could understand why their input on climate was considered worthy of a plane ticket to Africa and a week’s worth of accommodations, but not an invite to the First Ministers meeting in Ottawa or Vancouver.

“I’m unaware of any reason that could provide legal justification for us to be excluded,” said Joe. “The exclusion of aboriginal women has far reaching implications for our own prospects of inclusion in the political arena affecting society in our power relations. We need to let the federal government know that we have different perspective.”

Bertrand also confirmed that CAP attended the COP21 climate conference in Paris last year, and the COP13 Biodiversity Conference in Mexico earlier this month, again, paid for by the federal government. When asked why the two organizations have been invited to some critical climate change meetings, but not others, ECCC spokesperson Mark Johnson responded:

“This does not in any way preclude ongoing discussions, as committed to by the Prime Minister in December 2015, with all five NIOs (national indigenous organizations) and their regional affiliate organizations on a range of issues. The Government of Canada is committed to working and meeting regularly with the NIOs, and will continue to engage in robust bilateral discussions with all five NIOs on issues of importance to their members.”

"This is not the end"

Among the many reporters and indigenous representatives attending the reconciliation press conference in Ottawa on Thursday, was Winnipeg Centre MP Robert-Falcon Ouellette, who hails from the Red Pheasant First Nation in Saskatchewan. The young Liberal MP has been an outspoken advocate for issues of indigenous consultation in the House of Commons.

When asked whether he supported Trudeau's decision to repeatedly exclude NWAC and CAP from climate and reconciliation talks, he said indigenous inclusion in federal processes is a work in progress and will likely go through many transformations in the months to come.

"I don’t think it’s been completely decided who should be really at the table," he told National Observer. "I’m certain as it moves forward, there will be other groups that will be joining. I think this is the beginning of a conversation. This is not the end, it has not all been decided, or at least I hope it hasn’t."

Ouellette said he and a handful of other MPs have lobbied for inclusion of more indigenous voices in Canadian politics beyond the five major aboriginal organizations, and will continue to do so as reconciliation and climate discussions advance. But he also recognized the importance of gender balance during these conversations, and NWAC's ability to balance the scales.

"The chiefs in the past were not good defenders of women’s rights," he explained. "It became a very paternalistic society, so the women’s association was created to counterbalance that. I think we have to find a way to ensure there is this gender balance, because in indigenous society both men and women have a role to play. Women are the water keepers and men are the fire keepers....They offer different perspectives.

"I think we have to find a way to include more people in this process... It’s a very good first step, but I don’t think we’re there yet."

Meantime, Joe expressed disappointment that AFN did not stand up for NWAC’s right to be at the meetings, and Bertrand of CAP vowed to work harder to lobby the federal government for a seat at the table in the future. Both said they would consider partnership with one another in achieving this goal.