Some baloney to Clark's claim B.C. will pay twice as much for carbon as Ontario 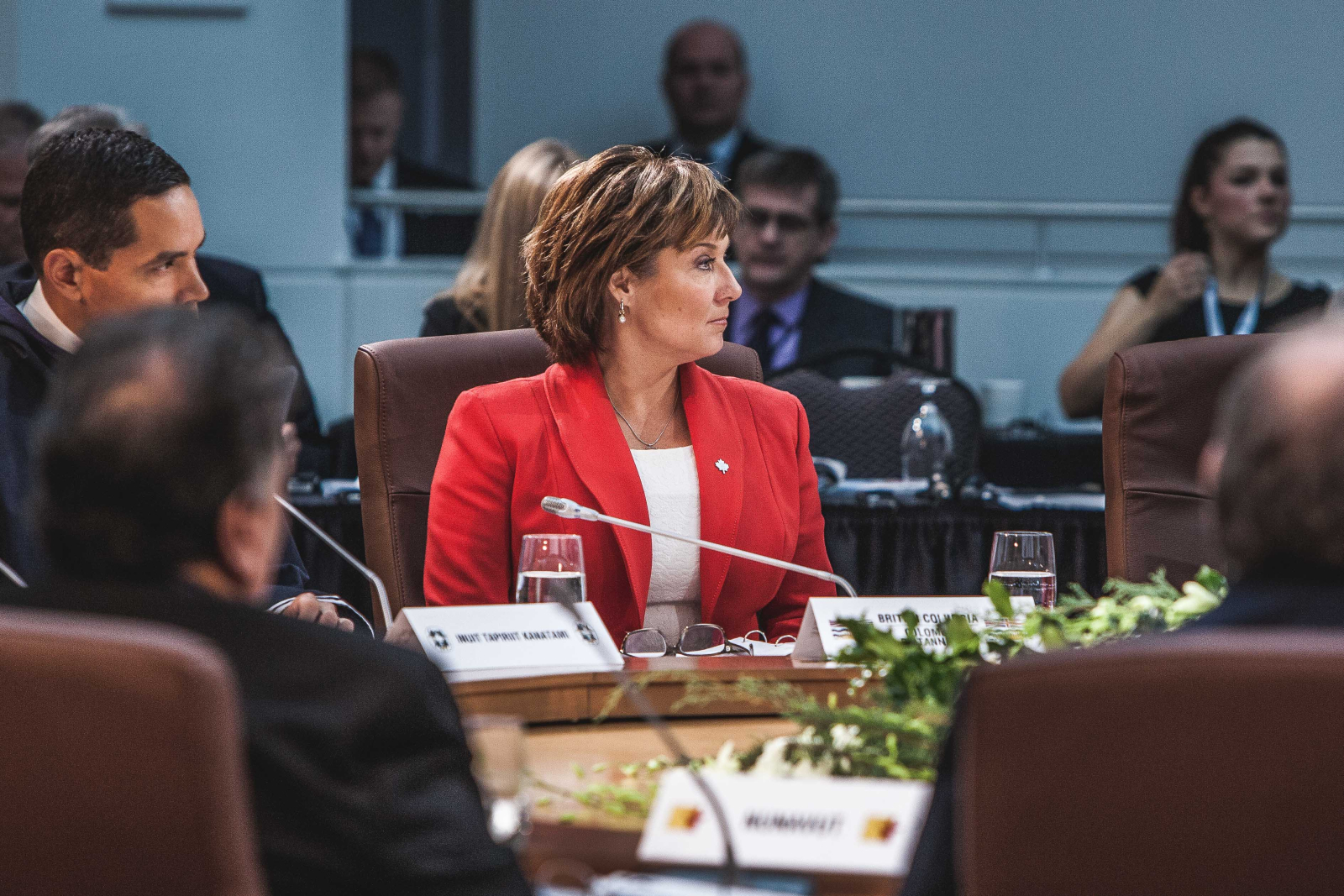 The sticking point was her insistence that Ontario and Quebec’s cap−and−trade market must impose a price on carbon emissions equivalent to provinces, such as B.C., that choose to impose a carbon tax.

On the face of it, there was no disputing Clark’s assertion that within five years, carbon−taxing provinces will be paying twice as much Ontario and Quebec. And so, in a last−minute concession to mollify Clark, Trudeau agreed to have an independent expert panel evaluate the carbon pricing regime in 2020, when the rest of the country will have theoretically caught up to the $30 per tonne of emissions that is already imposed by British Columbia.

But environmental economists say it’s misleading and simplistic to compare only the price per tonne of emissions under the two very different methods of pricing carbon. Spoiler alert: The Canadian Press Baloney Meter is a dispassionate examination of political statements culminating in a ranking of accuracy on a scale of "no baloney" to "full of baloney" (complete methodology below).

This one earns a ranking of "some baloney" — Clark’s assertion is partly accurate but important details are missing.

That’s consistent with Trudeau’s climate agreement, under which provinces must impose either a carbon tax or adopt a cap−and−trade system by 2018. In those that don’t (Saskatchewan is likely to be the only hold−out), the federal government will unilaterally impose a carbon price, starting at $10 per tonne in 2018 and rising by $10 each year to $50 per tonne in 2022.

Hence, in five years, the national price on carbon will be $30 per tonne — the same as B.C. and Alberta.

Quebec’s carbon market is currently trading permits for about $8 per tonne and is forecast to rise to $16 per tonne once Ontario fully joins Quebec and California in the Western Climate Initiative — in other words, roughly half what westerners will be paying.

So, in that sense, "there is some truth" to Clark’s assertion that westerners in energy−producing provinces will be paying twice as much as central Canadians, says Ottawa University environmental economist Nicholas Rivers, who holds the Canada research chair in climate and energy policy.

But that’s only part of a very complicated story.

"It’s a bit misleading to compare these two systems just on that metric," Rivers says.

A carbon tax is relatively straightforward: a levy is imposed by government on all or some carbon emitters for every tonne of emissions they produce. That levy is passed on to consumers in the form of increased prices for things like fuel.

In a cap−and−trade system, the market decides the price on carbon, which is also passed on to consumers.

As Rivers explains it, under cap−and−trade a government imposes a quota or cap on the amount of emissions it will allow and issues permits for those allowable emissions. Because there’s a limited number of permits, they acquire a value in the market as companies trade permits among themselves.

That value will depend on how stringent the emissions cap is. The lower the quota, the fewer the permits that are issued and, therefore, the higher their value becomes on the market.

The objective of Trudeau’s pan−Canadian agreement is to meet a national target of reducing carbon emissions by 30 per cent below 2005 levels by 2030, while giving premiers the flexibility to choose which method of carbon pricing is best suited to their individual provinces.

Because Ontario and Quebec have taken other policy steps to reduce emissions — such as Ontario’s phase−out of coal−fired power plants, which Ontario consumers are also paying for in the form of skyrocketing electricity bills — Rivers says their emissions are on the way down. As a result, they can adopt a cap−and−trade system in which permits are relatively plentiful and, therefore, relatively cheap and still meet the emission reduction target.

Clark is free to adopt cap−and−trade for B.C. if she really thinks it’s a less onerous way to price carbon. But she won’t because it would actually wind up costing British Columbians more than the existing carbon tax, Rivers adds.

"The reason she doesn’t is that emissions in B.C. are growing much faster than they are in the rest of Canada and if she did adopt a cap−and−trade plan in B.C., it would actually result in a higher carbon price," he says.

Dave Sawyer, president of EnviroEconomics, says the carbon price in each province will be the result of policy choices made by each government. And the bottom line is that: "Ontario and Quebec have designed a system to generate more (emission) reductions at cheaper cost."

If Clark is worried about competitiveness, he argues that B.C. already has the legislative architecture in place to shield its big industrial emitters from the full impact of the carbon tax, in effect emulating Ontario and Quebec’s cap and trade system.

Rivers says Clark’s assertion is "missing a lot of context" and ignores the fact that Ontario and Quebec "have got all these other policies in place that are costing Ontarians and Quebecers" but which won’t be reflected in the carbon price set by their cap−and−trade market.

On the face of it, Sawyer says, "Sure, it looks like B.C. is going to be paying let’s say one third more by 2020." But he adds, "there are choices that the British Columbia government has made that’s going to increase the cost on their business that Ontario hasn’t made.

"So it’s not such a simple comparison."

For these reasons, Clark’s assertion scores a rating of "some baloney."

No baloney — the statement is completely accurate.

A little baloney — the statement is mostly accurate but more information is required.

Some baloney — the statement is partly accurate but important details are missing.

A lot of baloney — the statement is mostly inaccurate but contains elements of truth.

Full of baloney — the statement is completely inaccurate.

In July 2016, the Canada's Ecofiscal Commission published a report "Comparing Stringency of Carbon Pricing Policies". The focus of the report was to compare the stringency of carbon pricing policies in Canada: "Carbon pricing is not automatically effective at reducing GHG emissions. Effectiveness depends on stringency , a measure of the policy's ability to drive emissions reductions."
The report also insists on the importance for provinces to coordinate their carbon pricing policies to ensure that low-cost emissions reductions across the country are realized. The report explores different paths to get there. A summary of stringency metrics and estimates for Canadian provincial policies comparing carbon pricing policies between provinces are presented.
The final metric proposed in this report, the "trade-adjusted carbon price" seems to be the preferred option when coordinating carbon price policies. The "trade-adjusted carbon price" takes into account emissions reductions realized through international permits which represent real emissions reductions at the global level. When comparing carbon pricing between BC, Alberta, Ontario and Quebec under that metric for 2020, prices between those provinces gets pretty close to one another: BC's carbon price reach $21 while covering 70% of all emissions; Alberta gets to $23.40 with 78% coverage; Ontario is at $17.83 with 82% coverage; Quebec with 85% coverage is estimated at $18.08. So according to this report, Alberta would have a price on carbon higher than BC in 2020.
"In consultation with the provinces, the federal government could define a minimum threshold of stringency based on the trade-adjusted carbon price. This minimum standard could be scheduled to rise over time and be sufficiently stringent for Canada to achieve its 2030 emissions target."
The provinces and the federal government have the duty to collaborate and put their respective political agenda aside for the benefit of Canada and the rest of the world.