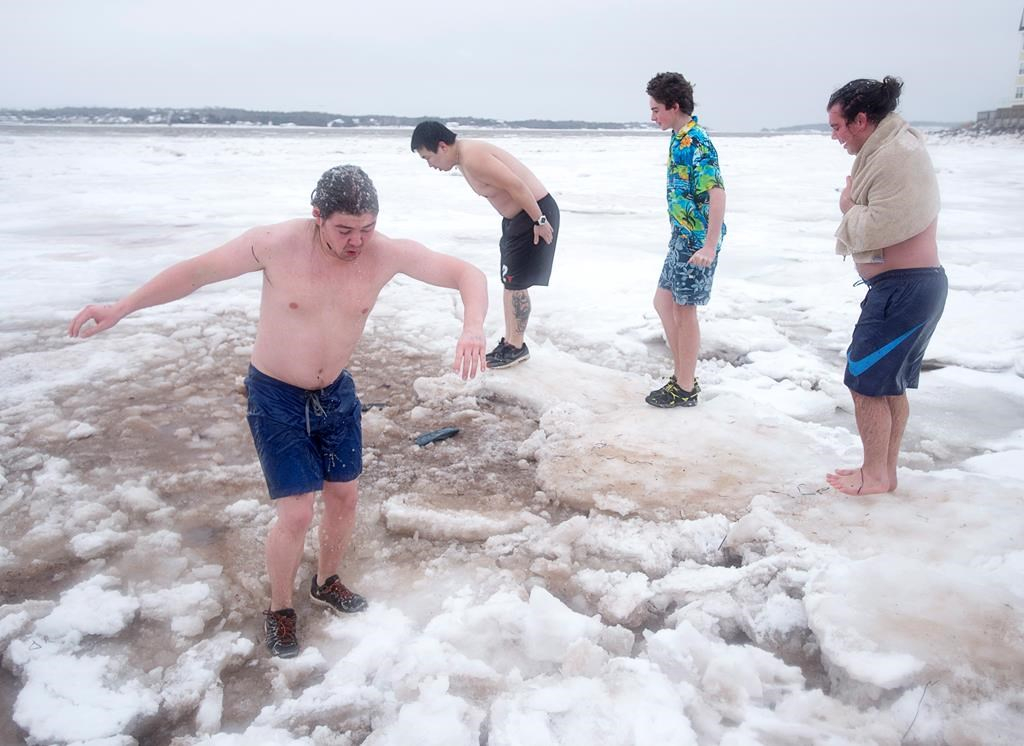 Organizers said the 2017 plunge was the best turn-out since the first polar bear swim in Herring Cove, N.S. in 1994. Photo by The Canadian Press
Previous story
Next story

An octogenarian, with the words "Happy 2017" scrawled across his body in permanent marker, took the inaugural leap into the Atlantic Ocean in one of the first polar bear swims of the year.

Eighty-two-year-old Arnie Ross, clad in coral swim trunks, was the first of more than 250 people to jump off the wharf in Herring Cove, N.S., on Sunday.

Organizers said it was the best turn-out since the first polar bear swim in Herring Cove in 1994.

Ross has there almost since the beginning — it was his 21st year participating in the New Year's Day tradition, and he doesn't plan on quitting anytime soon.

"My own belief is a lot of people come to see me to see if I'm going to die this year when I hit the water," Ross said. "I'm not going to because I plan to live to over age 100."

East Coast residents, like those in the Halifax suburb of Herring Cove and others in Charlottetown, were the first of thousands across the country to ring in the new year by dipping into Canada's frigid waters today.

Vancouverites were met with an uncommonly snowy beach as they stripped down to costumes and swimsuits to partake in one of the oldest and largest "Polar Bear Club" swims on Sunday afternoon.

Organizers said over 1,500 people were registered as the first few rounds of swimmers raced into English Bay, with more continuing to sign up.

Standing barefoot on a towel frantically drying himself off, Roly Morales said the sand felt colder than the water.

The plunge was among many recent firsts for Morales who immigrated to Canada from Cuba only last month.

His wife, Denise Corcoran, who opted to stay dry said the plunge was one of many ways to get him accustomed to Canadian traditions — and the climate.

"When he moved here it's like rain... then snow and snow and more snow. You know he's committed and in love when he's gone through this," said Corcoran, who grew up in Vancouver.

Morales said he also likes taking on physical challenges and seeing so many kids take the plunge, he wanted to prove to himself that he could handle the icy temperatures as well.

"I would do it again, but maybe with a pair of shoes because my feet are frozen," he said.

In Toronto, hundreds more ran into Lake Ontario: some in costume, others in bathing suits.

"I think this is definitely the coldest I've ever been," said Cait Caulfield, who bundled herself in a reflective emergency blanket after her dip in the lake.

But the adrenaline rush was worth it, she said. She's planning on coming back next year, and she'll bring friends.

About 40 kilometres down the road, in Oakville, 700 people ran into the lake at another event. They had been told to wear red and white to mark Canada's sesquicentennial year, and money raised from donations went to charity.

Sunwing apologizes after 'unfit' pilot passed out in Calgary cockpit