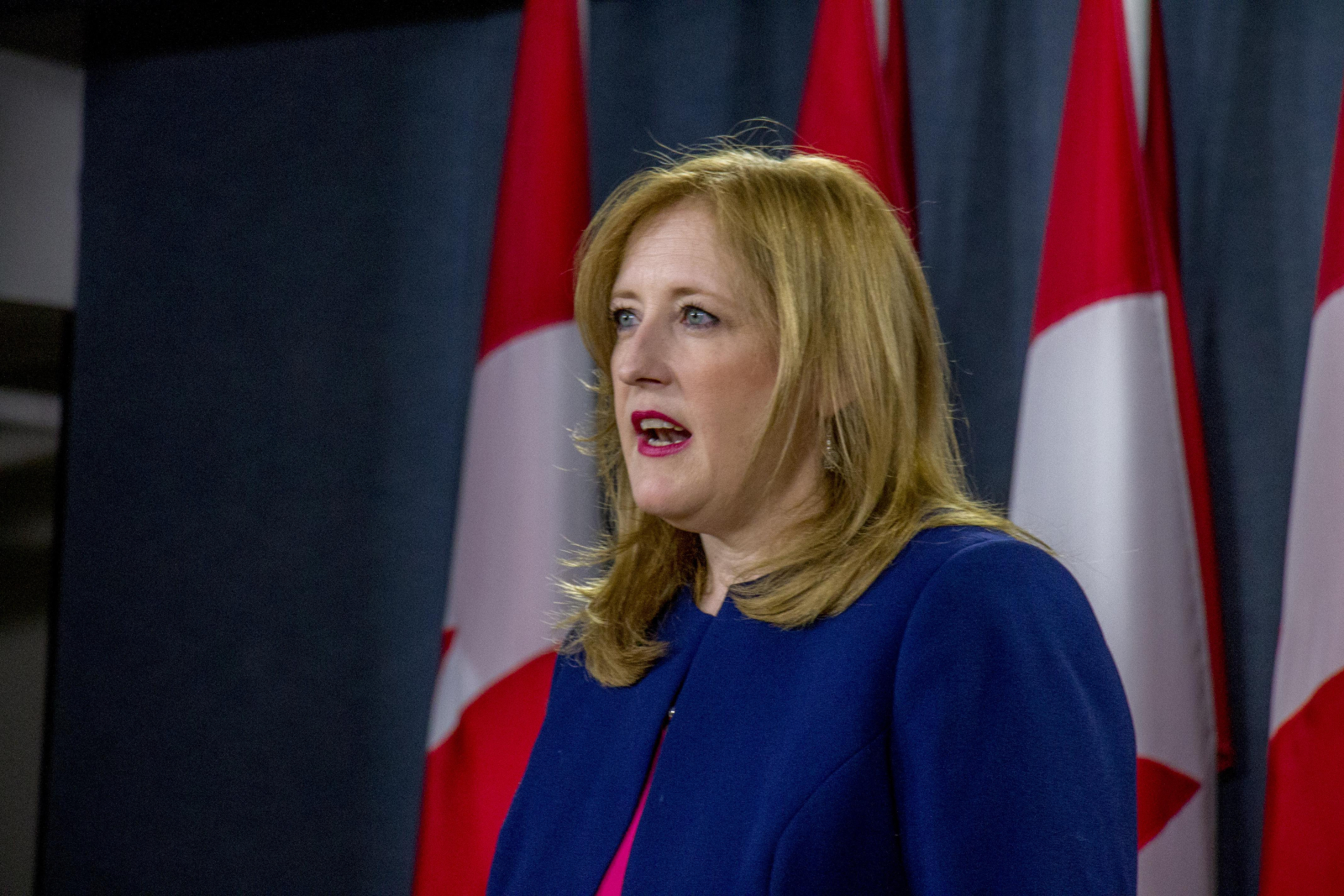 In a world where Donald Trump is about to be president of the United States, anything is possible.

This week, Lisa Raitt made a bet that pragmatic Conservatives will take back their party from those wanting to divide and conquer Canadians.

Raitt is an Ontario MP from Nova Scotia. And the politician, whose background includes previous work with a labour union as well as degrees in law and science, made comments on Wednesday that were a breath of fresh air to kick off 2017.

The former federal cabinet minister was clear and direct as she spoke to reporters in Ottawa at a morning news conference Jan. 4. She announced she was “taking a stand” against the “cheap talk” and “irresponsible populism” of fellow Conservative leadership candidate Kellie Leitch and possible leadership hopeful Kevin O’Leary.

She launched a website, www.stopkevinoleary.com, and called out her “friend” Leitch for threatening the Conservative coalition that Stephen Harper built.

Raitt is worried that the likes of Leitch and O’Leary will drive her party into the ground. And I think she’s right.

The Tories lost the last election campaign precisely because they went negative. They zeroed in on a core group of supporters and chose to scare the public and divide the rest of the country, rather than reaching out to a broader public. They lost 220,000 votes in the 2015 election.

I guess they forgot that this is Canada. And despite what some criticized as “hokey,” despite the negativity that propelled Trump to the White House south of the border, positive messages do work here.

Yes, there was the "change" factor but Justin Trudeau’s “sunny ways,” “hope and hard work” and “better is always possible” mantras allowed him to take his Liberals from a 34-seat third place party to a majority government in one election cycle. Trudeau's positive campaign had strong parallels to 2011, when Jack Layton lifted his NDP caucus into official opposition for the first time in its history with a message of optimism in that election campaign.

On the other hand, there wasn’t much to be optimistic about in the 2016 U.S. election. It was a mudslinging race-to-the-bottom, where personal attacks were as common as the pot holes in Montreal.

But there’s still a lesson to be learned from the U.S. about hope. Let’s not forget that Barack Obama was elected the first black president of the United States in 2008 because he offered hope and inspiration to the American people in that historic campaign.

This is not to say that negative attack ads or criticism of political opponents don't have a place during an election campaign or leadership races. They serve a purpose when they are rooted in fact. But if we want to protect our democracy, we need to steer clear of any type of hatred that moves our society towards the temptations of fascism.

It only took a moment for Leitch to respond to Raitt’s promise of hope. And in doing so, Leitch demonstrated the maturity of a five-year-old who had just stolen some candy from her older sister.

Leitch, whose job as a surgeon is to help children, decided to use Facebook to call Raitt a Liberal media elite, for no particular reason other than a disagreement about political strategy.

Is this the conversation that Conservatives want to have with each other? Can we not get past the overused “you’re either with us or against us” line? Not everything is black and white, and not everyone who disagrees with you is everything you hate.

So maybe it’s time that politicians turn away from empty and disrespectful rhetoric, as Raitt suggested.

"Leitch called Trump’s message 'exciting,'" said Raitt. "She wants to bring it to Canada, she wants to test immigrants on her undefined Canadian values. She wants to destroy one of the pillars of our party’s success, a decade of work becoming the party of immigrants."

Here's hoping that Leitch’s campaign manager Nick Kouvalis was taking notes as Raitt was speaking instead of cooking up another irresponsible scheme to disseminate lies and then gloat about it.

Conservatives will choose their next leader on May 27. Who knows who will win, but Raitt is 100 per cent correct when she says that “If this is the path (of divisive politics) that’s going to be chosen, we (Conservatives) are going to be sitting in opposition for a very long time because I firmly believe that the general Canadian populace will not buy this.”

Back in the Kevin O’Leary camp, the prospective contender has not yet made an official announcement to enter the Conservative leadership race. And maybe Raitt is taking a risk by setting up a website that is dedicated to “stopping” him. After all, if he doesn’t join the other 13 candidates she would have spent political capital on someone who turned out not to be a threat. So perhaps Raitt’s mistake this week was neglecting to set up a www.StopKellie.com website.

While Leitch took an early lead with her “anti-Canadian values test,” a December 2016 Forum Research poll found that nearly half of all Conservative supporters (49 per cent) say they would prefer “someone else” as leader.

The poll has a large margin of error but shows all of the leading Tory contenders — Michael Chong, Raitt, Chris Alexander, Leitch, and Andrew Scheer — with extremely low levels of support in the single digits.

Among all Canadians, Chong had the most support at 10 per cent, followed by Raitt at eight per cent, Leitch at seven per cent and Alexander at six per cent.

Unfortunately for the Tories, ‘Someone Else’ is not actually a candidate who can be added to the ballot.

Raitt’s own polling may show that should O’Leary enter the race, he is the one to beat. But the contest is still wide open, almost six months out.

Raitt is a seasoned, likeable politician and experienced former cabinet minister. Her strategy to differentiate herself from the negative and divisive politics so prevalent today may just pay off. “Canadians are different,” she said. “I will stand up to this cheap talk.”

Yes, and thank you for doing so, Lisa.

"Yes, there was the "change"

"Yes, there was the "change" factor but Justin Trudeau’s “sunny ways,” “hope and hard work” and “better is always possible” mantras allowed him to take his Liberals from a 34-seat third place party to a majority government in one election cycle."

Most of what JT promised is gradually being exposed as BS... especially in BC. His 'mantras' allowed him to take HIS liberals to a majority government?? First Past the Post allowed him a FALSE majority! We all know that 39% is NOT a majority! It was the support of environmentalists, First Nations and the ABC movement and his promise to make 2015 the last election under FPTP that 'allowed' him his false majority. We're not loyal to JT or the Liberal Party of Canada. He'd be wise to not count on our support again. #NeverAgain! Climate leaders don't build pipelines. Change??? Pfff! CONS & LIBS are interchangeable.