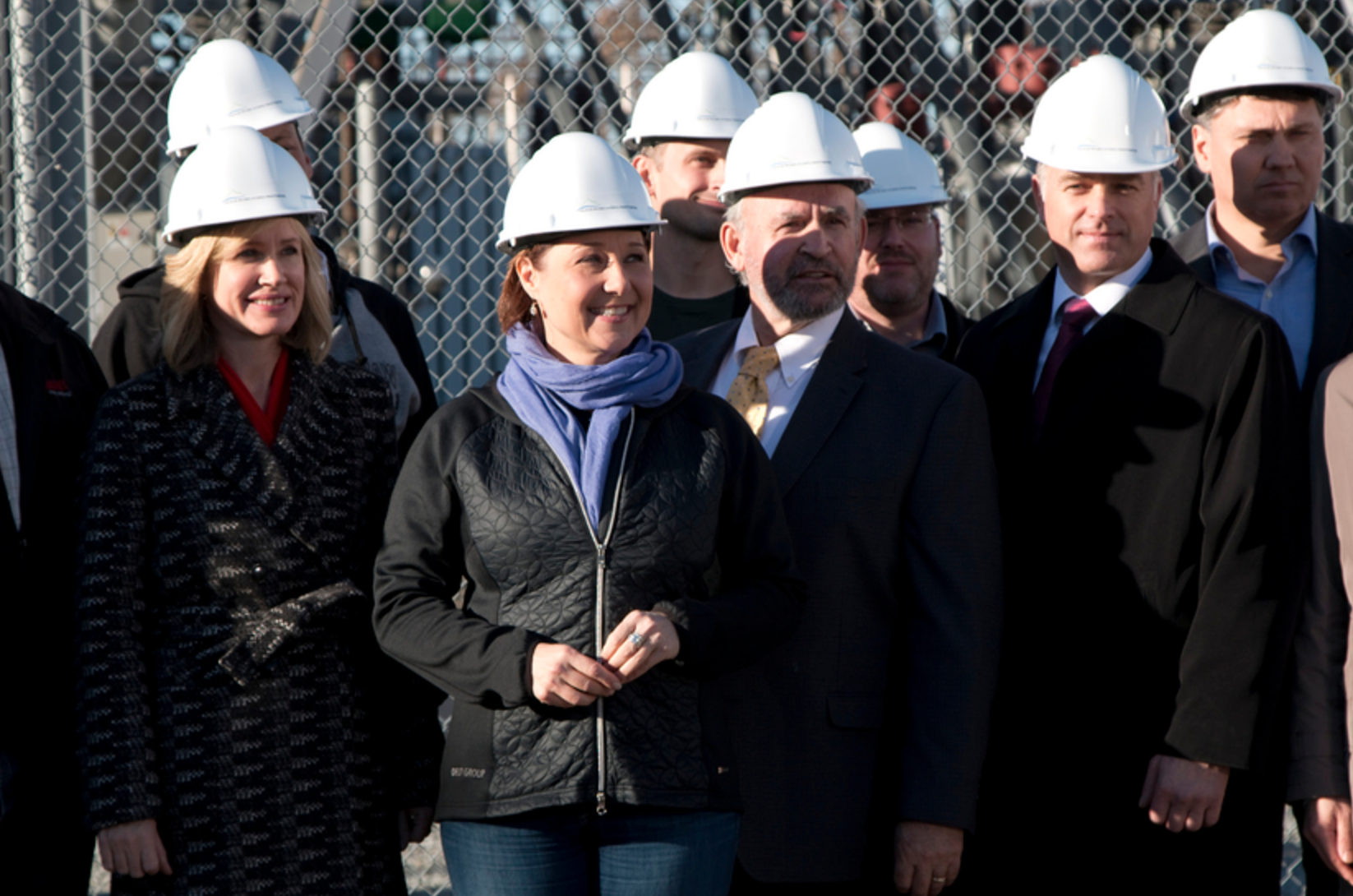 Editor's Note: This article originally appeared on DeSmog Canada and was re-published by National Observer with permission from the managing editor.

BC Hydro officials and members of Premier Christy Clark and Energy Minister Bill Bennett’s offices were all involved in a coordinated attempt to discredit DeSmog Canada’s reporting on the $8.8-billion Site C hydroelectric dam, according to documents obtained through Freedom of Information requests.

The documents detail a flurry of emails following a DeSmog Canada story that quoted former BC Hydro CEO Marc Eliesen saying that Site C was proceeding without due diligence, would lead to escalating hydro rate increases and was “scheduled to become a big white elephant,” a story later referenced by the New York Times.

BC Hydro officials were concerned that major B.C. media would pick up on the DeSmog Canada story, based largely on a BC Hydro progress report to the B.C. Utilities Commission. That report noted that Site C had fallen behind on four out of seven key milestones and outlined project risks and reasons why Site C had spent more money than anticipated by the end of last March, while saying that the project’s overall forecast still remained on track.

“This is expected to generate media interest,” Craig Fitzsimmons, BC Hydro’s manager of communications and issues management for Site C, flagged in emails to the premier’s office and Bennett’s office, informing them that numbers in the article came from the Crown corporation’s own report.

The premier’s office directed BC Hydro to respond to the article immediately even though it was the start of the Canada Day long weekend, a sign of the top priority Clark’s team has placed on controlling the story line on the Site C dam, the most expensive publicly funded project in B.C.’s history.

Two days later, internal Hydro emails show, BC Hydro CEO Jessica McDonald took aim at an opinion editorial that had been published more than one month earlier in the print and online editions of The Province newspaper.

BC Hydro tries to "hit back" against reporting

The opinion piece was based entirely on a DeSmog Canada story published the previous day about BC Hydro’s ongoing civil lawsuit against some of the Peace Valley farmers and First Nations members involved in the Rocky Mountain Fort winter camp, which delayed Site C clear-cutting of a B.C. heritage site for two months. The piece quoted the head of the BC Civil Liberties Association who called the lawsuit, which seeks financial damages for BC Hydro from individuals, a matter of “grave concern” because of its potential to curtail freedom of expression.

McDonald, saying erroneously that the opinion piece had changed a month after publication and now contained “commentary that is even more misleading than before” asked top staff if it were possible to “dust off” a one-month-old unpublished BC Hydro letter to the editor of The Province and “create a new piece that hits back.”

“I feel this is really important as we head into the Paddle for the Peace which is focused on the Boon’s property next weekend and will be very focused on stopping the federal authorizations based on our supposed unfairness,” wrote McDonald.

McDonald was referring to Ken and Arlene Boon, two of the Peace Valley farmers named in Hydro’s civil law suit, whose third-generation farmland and home were expropriated by BC Hydro in December for a Site C highway relocation. At the time the email was written, BC Hydro was waiting for federal authorizations for Site C that were subsequently granted by the Trudeau government, even though First Nations leaders had requested that the permits be withheld.

According to the internal Hydro emails, McDonald said she wanted a statement drafted to say that information in the opinion piece was “inaccurate.” She also wanted her staff to make sure BC Hydro was “closely monitoring” some DeSmog Canada articles and to flag when there were updates.

McDonald wanted it to be made clear that BC Hydro supports freedom of expression and is taking legal action only to prevent people from physically blockading work on the project. But the documents also suggest that BC Hydro wanted to do more.

“I talked to Jessica and she would like to hit Sarah Cox hard for never contacting us for an interview on the issue, continuing to ignore our input, and then ramping up the rhetoric,” said an email written by Danielle Van Huizen, a senior business advisor in McDonald’s office.

That prompted a quick reply from BC Hydro’s Site C spokesperson Dave Conway, who informed colleagues that Hydro had indeed been contacted for comment three times over a five-day period, by email and phone.

“We will have to be careful what we write and be sure legal has a look at it,” advised Van Huizen in another email.

Two days later, BC Hydro issued a news release, approved by Bennett’s office and including text from a letter to the editor approved by the premier’s office, saying there were “inaccuracies” in the five-week old Province opinion piece, and also saying that the piece had been “posted” more than one month later than its actual publication date.

That followed closely on the heels of a BC Hydro news release, approved by both the premier’s office and Bennett’s office, which attempted to discredit DeSmog Canada’s story about Hydro’s progress report to the utilities commission, saying it contained “inaccurate statements."

At that point, DeSmog Canada sent a registered letter to Simi Heer, Hydro’s manager of media relations and issues management, asking BC Hydro to identify any factual inaccuracies so that they could be corrected. Heer, who later left BC Hydro, did not respond to the letter, or to emails and a phone call. BC Hydro has never contacted DeSmog Canada directly to request any story corrections.

Dozens of pages were redacted from BC Hydro’s 1,600-page FOI response on the grounds that they “were penned for the purpose of seeking or providing legal advice.” Other pages, including parts of emails written by McDonald about the opinion piece, were redacted on the grounds that releasing the full emails would constitute an unreasonable invasion of a third party’s personal privacy.

The FOI documents also reveal how top officials in the premier's office and Bennett's office control other media relations regarding the Site C Dam, as reported by the Vancouver Sun last week based on a DeSmog Canada FOI to the premier’s office that is now publicly available.

The premier’s office and Bennett’s office directed the timing of various Site C announcements, including an announcement about the completion of a temporary bridge across the Peace River, which Bennett did not want BC Hydro to make too close to an April increase in hydro rates.

Both offices were also involved in the timing for an announcement about the completion of the $470-million lodge for Site C construction workers, which cost BC Hydro customers almost as much as Clark’s pre-election pledge to spend $500 million on affordable housing projects to help alleviate the Lower Mainland’s housing crisis.

The offices also vetted a BC Hydro press release, which included quotes from Clark and Bennett, announcing that a $470-million contract had been awarded to Voith Hydro Inc. to supply turbines and generators for the Site C dam.

According to Luc Bernier, a Canadian expert in Crown corporations, BC Hydro should have more independence from the government to ensure that sound decisions are being made. He said it is not unusual for governments to be kept apprised of developments on large publicly funded projects like Site C, and to control and to supervise these projects to a certain extent, because they are highly visible.

But directing day-to-day communications can lead to decisions being made for political reasons and not because they are in the best interests of the Crown corporation, said Bernier, who holds the Jarislowsky Chair in Public Sector Management at the University of Ottawa and is the former head of the Institute of Public Administration of Canada.

“For the proper functioning of Crown corporations it should be more independent. We do put these organizations further away from politics to make sure the main reason to exist — in this case to produce electricity — is not done for political reasons."

Public sector management expert David Zussman said the question of how independent Crown corporations should be from governments is a contentious issue right across the country.

“In recent years in particular there’s been a distancing of the Crowns from the government,” said Zussman, a former dean of the University of Ottawa’s School of Management and previous commissioner of the Public Service Commission of Canada.

“The trends today I would say are for greater independence of Crown corporations."

Hydro Quebec, for instance, is a far more independent entity than it was 30 years ago and Zussman said to the best of his knowledge it has “almost nothing to do with the government” today. To achieve good governance, he said Crown corporations “should operate independently from government on a day to day basis,” adding that what exactly that means is open to interpretation.

The FOI request to the premier’s office also asked for emails and documents related to Site C’s most recent budget and timeline, but that information was not forthcoming. Fourteen pages of the response were redacted.

One internal Hydro email from Michael Savidant, BC Hydro’s Site C commercial manager, addressed Site C project risks outlined in Hydro’s progress report and referenced in DeSmog Canada’s story. But Savidant’s points were not included in Hydro’s news release about the story or in BC Hydro’s list of key messages, vetted by Bennett’s office, for any other media inquiries about the report.

“On the potential for cost overruns — yes if those things happen there will be cost increases,” Savidant wrote to Fitzsimmons and Chris Sandve, Bennett’s former chief of staff who is now BC Hydro’s director of policy and reporting.

“Those risks exist on any project. We disclosed them in the Business Case and at the JRP [Joint Review Panel hearings on Site C]. The key is to highlight that we have contingency to cover most items, and a project reserve to cover the rest.”

The internal emails also detail BC Hydro’s concerted efforts to craft messaging for any members of the media who expressed interest in following several DeSmog Canada stories about Site C, including a story about Hydro’s $175-million plan to truck at-risk bull trout upstream past the dam for 100 years when up to 40 per cent of the fish are expected to perish in the dam’s turbines while migrating back downstream.

One internal Hydro document with a weekly Site C public affairs summary listed Freedom of Information requests as one of the “on-going risks” to the project.

“The Project continues to get a lot of Freedom-of-Information Requests related to various issues. The FOIs can be expected to end up in the public realm, usually through media reports,” the document noted.

BC Hydro only responded to the FOI request, made last August, after a complaint was filed with the Office of the Information and Privacy Commissioner (OIPC) when the Crown Corporation missed a legal deadline for delivering the documents.

The commissioner issued a consent order, compelling BC Hydro to release the information.