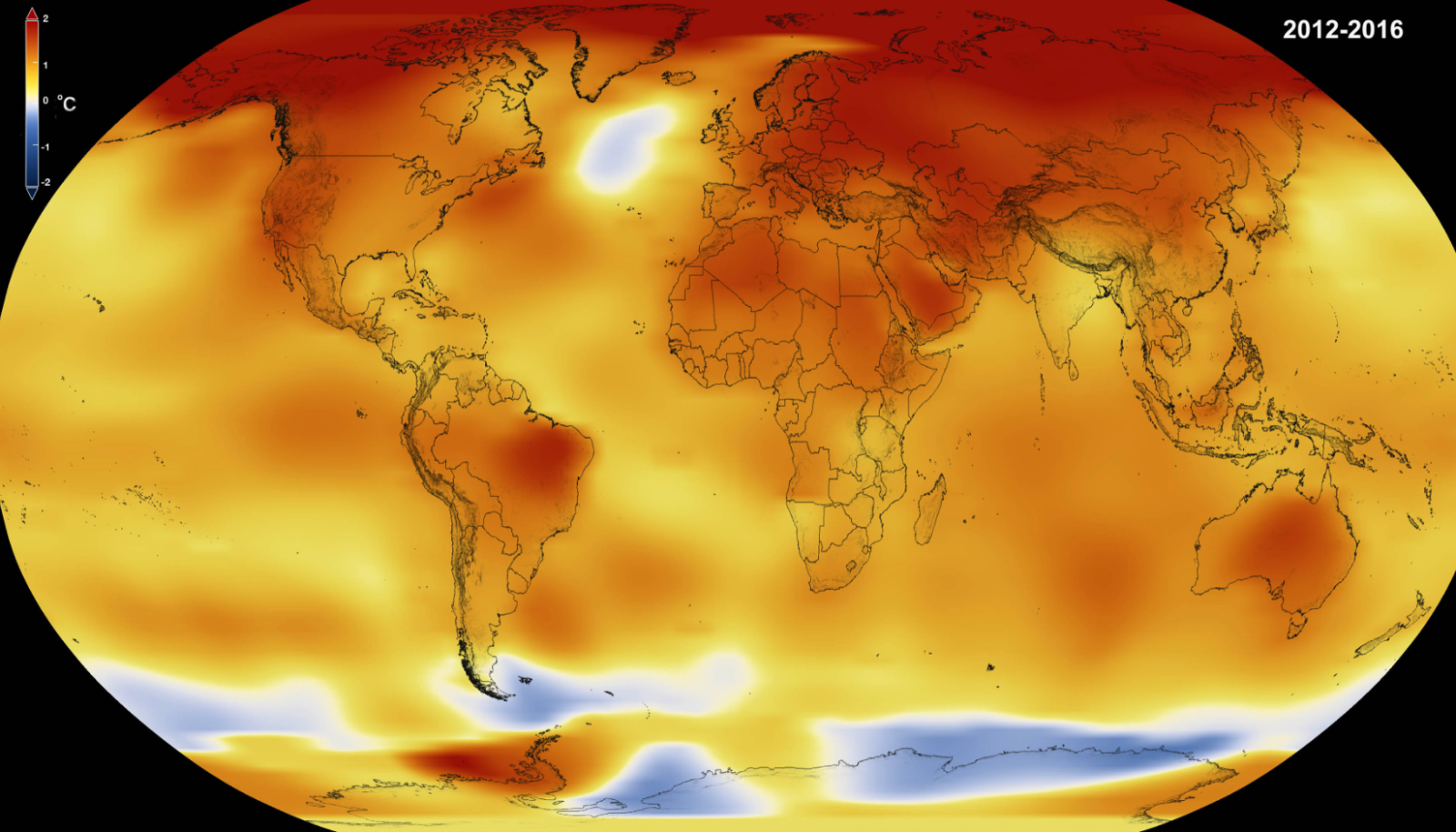 As bombastic businessman Donald Trump — who famously claimed that climate change is a business hoax created by China — prepares for his Friday inauguration as president, NASA issued a bombshell report this morning outlining how serious the problem is.

The last 12 months have been the hottest on record and the world needs to take "urgent action," according to the latest analysis from the space agency and the National Oceanic and Atmospheric Administration (NOAA). In a Wednesday morning press conference, the research organizations announced:

1. Earth’s 2016 surface temperatures were the warmest since modern recordkeeping began in 1880.

5. Because weather station locations and measurement practices change over time, there are uncertainties in the interpretation of specific year-to-year global mean temperature differences. However, even taking this into account, NASA estimates 2016 was the warmest year with greater than 95 per cent certainty.

6. The planet’s average surface temperature has risen about 2.0 degrees Fahrenheit (1.1 degrees Celsius) since the late 19th century, a change driven largely by increased carbon dioxide and other human-created climate pollution into the atmosphere.

8. Not only was 2016 the warmest year on record, but eight of the 12 months that make up the year – from January through September, with the exception of June – were the warmest on record for those respective months.

9. October, November, and December of 2016 were the second warmest of those months on record – in all three cases, behind records set in 2015.

In other climate news, Yale's Program on Climate Change Communication released results of a recent survey that came out before NASA's report. It shows that a growing number of Americans "are increasingly sure global warming is happening."

The proportion of Americans who think global warming is happening was 70 per cent in 2016 – nearly matching the highest level measured since November 2008 (71 per cent), Anthony Leiserowitz, Ph.D. Director, Yale Program on Climate Change Communication wrote in an email this morning.

From very sure to extremely sure

It's a subtle difference, Leiserowitz writes, but "Americans are now also more certain it is happening. The proportion who are 'extremely' or 'very' sure global warming is happening (45 per cent) is at its highest level since 2008, he reports, adding that "the number of Americans who are 'very worried” about global warming has reached a record high (19 per cent) since our surveys began in 2008.

What are Canadians thinking about global warming?

You tell us. We love to hear from you.

Linda Solomon Wood, with editorial assistance from Chris Hatch, and files from NASA and Yale

Thankfully Trump is not the

Thankfully Trump is not the market. The article points out that more Americans than ever are concerned about climate change. We also know more Americans voted for proactive climate change policy than voted for Trump. Therein lies the opportunity for Canada to lead the way on climate policy and low carbon economics.

I don't buy the Green argument that the best way to deal with carbon pollution is to crash the economy today to prevent a crash tomorrow. I believe there is a market based transition away from fossil fuels underway globally, and that trend will continue no matter what Trump gets up to.

Carbon pollution + Trump present Canada with a great opportunity to stand on its own two feet for a change. The world will be better off for it!

Problems are clearly identified. Now I'd like to know what else that I, as an individual Canadian, can do in my community.
I already 3R, walk, sign petitions, donate, but I often hear "Don't bother, what you do doesn't make a lick of difference. The problems are those other countries or cows or ingrained greed and corruption."

Is anything working to slow global warming? I'd love to read something that gives me hope.

We have the technology to

We have the technology to replace petrochemical energy but until we, in the developed countries which contribute the greatest carbon load/person, decide that a concerted effort by each of us will make a difference it is unlikely to happen. In times of war, the general populace has been persuaded to redirect efforts toward that war effort. If we could be convinced to do the same now to reduce carbon output just by relocalizing our needs, thereby reducing travel of goods and people as well as reducing consumption overall we would be able to make a less threatening transition to sustainable energy. This must be a grassroots, from the ground up movement because governments are showing that they will not lead. As a country we are also in a position to set an example because the world still admires and respects us - as a people let's live that promise!

As someone who is in the

As someone who is in the business of growing fruit in BC's Okanagan, I can vouch for the fact that things are getting warmer. Measurements made in heat days are indicative of an increase in that sector. There's also an increase in the growing period.

Will harm people? Global warming is *already* harming people, including many of the people who are choosing to ignore it. Have Albertans forgotten their wildfire?

Come to think of it, the Wildrose party should change its name to Wildfire; it's a much more appropriate name for them. I doubt they're doing wild roses any good, but they're doing wonders for wildfires.