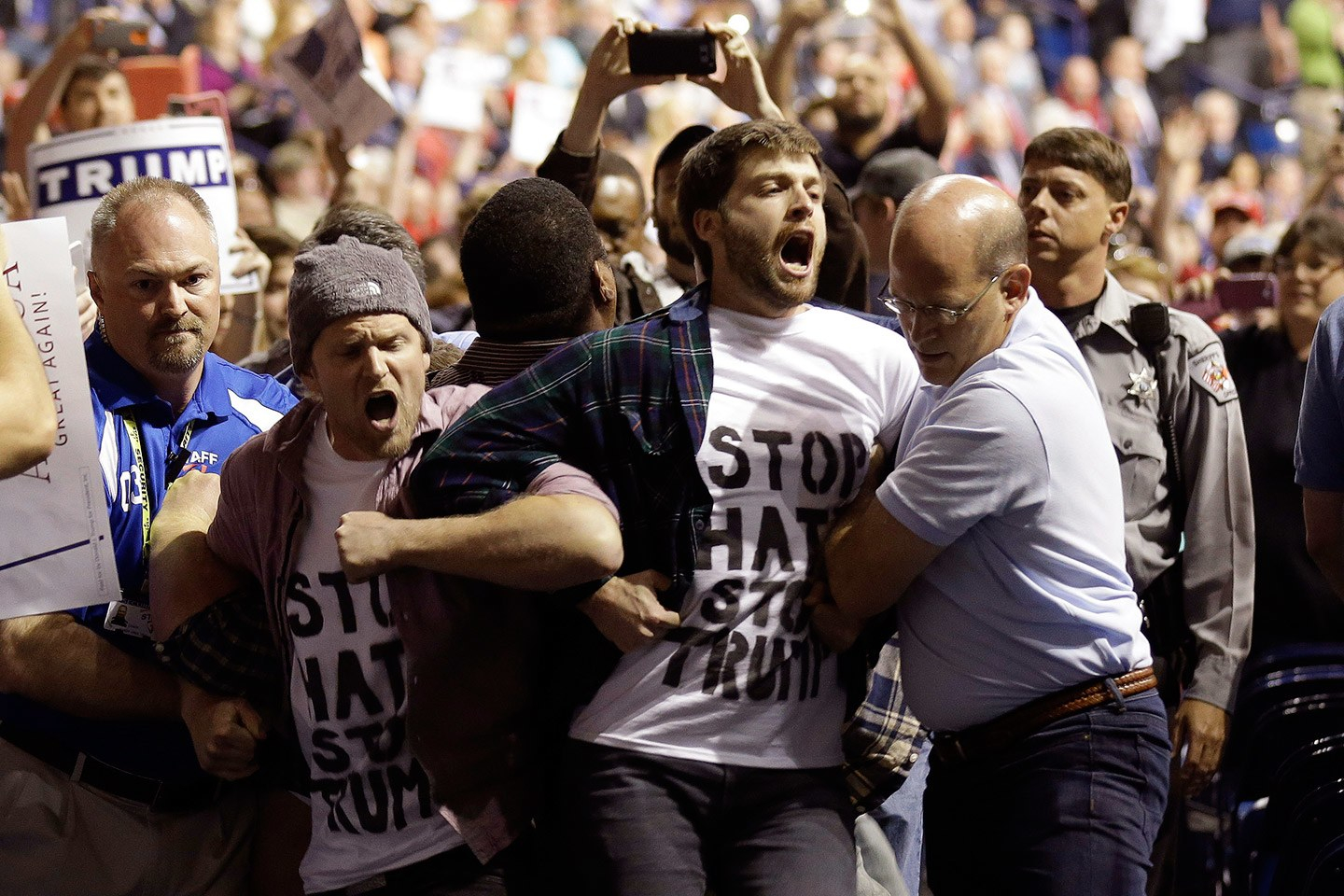 Protesters demonstrate against Donald Trump's presidency during the campaign trail in 2016. File photo by Associated Press
Previous story
Next story

Donald Trump will get an earful from America's noisy majority as he moves into his new home Friday. He'll be jeered on the parade route as he enters the White House with the lowest approval rating of any new president of the modern era.

One protest organizer expects thousands in a plaza on Pennsylvania Avenue, halfway between the Capitol and the White House. He says the goal is to produce a show of force to encourage Trump to back down from his most controversial policies.

"We want to make it very clear there's going to be permanent, sustained, massive mobilization all throughout the Trump presidency," says Walter Smolarek, who is organizing buses of protesters from Philadelphia.

"They'll make the calculation that it won't be worth it to pursue these types of policies."

Smolarek's group Answer Coalition is one of dozens organizing protests — first on inauguration day Friday, and then with larger demonstrations Saturday for a women's march that could draw a larger crowd than the inauguration itself.

More buses are coming for protests than the president-elect.

A municipal committee revealed last week that 393 buses had requested parking permits from Washington city hall for inauguration day. That's compared with 1,200 for the next-day women's march. Compare that to Barack Obama's last inauguration: the city says 900 bus permits were requested at the same time four years ago.

Other metrics point to a modest turnout: Hotel rooms were still available this week. Inauguration tickets were still being offered online. One performer after another pulled out of the event.

None of that has sapped Trump's inexhaustible supply of self-promotional cheer.

"People are pouring into Washington in record numbers," the president-elect tweeted this week. "Bikers for Trump are on their way. It will be a great Thursday, Friday and Saturday!"

That biker group says it'll be there to provide security, if things get out of hand. The group's founder assured a Fox News audience that he respects police and won't act as a vigilante.

"But in the event that we are needed we will certainly form a wall of meat," Chris Cox said.

The bikers will be rolling onto hostile political territory for Trump fans. A mere four per cent voted for Trump in Washington, D.C., the worst score for any major-party candidate since the capital got voting rights.

The local magazine, The Washingtonian, devoted a page in its latest edition to tips for people desperate to flee the scene: "Don't want to be anywhere near Donald Trump's swearing-in? We've got you covered."

It offered a list of potential activities in and around town, away from the National Mall, and concluded with one suggestion for people about renting their homes on Airbnb to Washington-bound Trump fans: "Take the money and run."

There's a challenge for property owners hoping to cash in, however: lots of hotel rooms are still available.

On the hotel site Booking.com, rooms in D.C. can still be had for as little as US$199 on the eve of the inauguration. The site says only 79 per cent of the city's rooms are reserved on that evening.

It was similar with personal-home rentals; 11 per cent of local apartments were still available on the Airbnb site, where prices ranged from $200 for a private room to more than $2,000 for some full houses.

The car ride-share service Uber sent a message to users that put the presidential inauguration and protests on equal footing: "We'll keep you moving throughout the busy weekend's events, from inauguration day to Saturday's march."

Not that Trump is the first incoming president to have his inauguration clouded by protest. Anti-Vietnam demonstrations marred Richard Nixon's second inaugural in 1973, and protesters also made themselves seen during George W. Bush's 2001 inauguration.

Bush managed to joke about them.

"While I couldn't make out their words, their middle fingers spoke loudly," Bush later wrote.

It's unclear whether Trump will be equally capable of laughing it off.

He's not only less inclined to self-deprecation than Bush but lacks another attribute claimed by the 43rd president: a decent level of public support as he took office.

Bush arrived in the White House with a 62 per approval rating, according to Gallup pollsters. Bill Clinton began at 66 per cent. Obama was at 78 per cent.

Trump totes a 40 per cent support score, and a 55-per-cent disapproval rate, as the only president in the history of modern polling with negative approval ratings while making that journey down Pennsylvania Avenue.