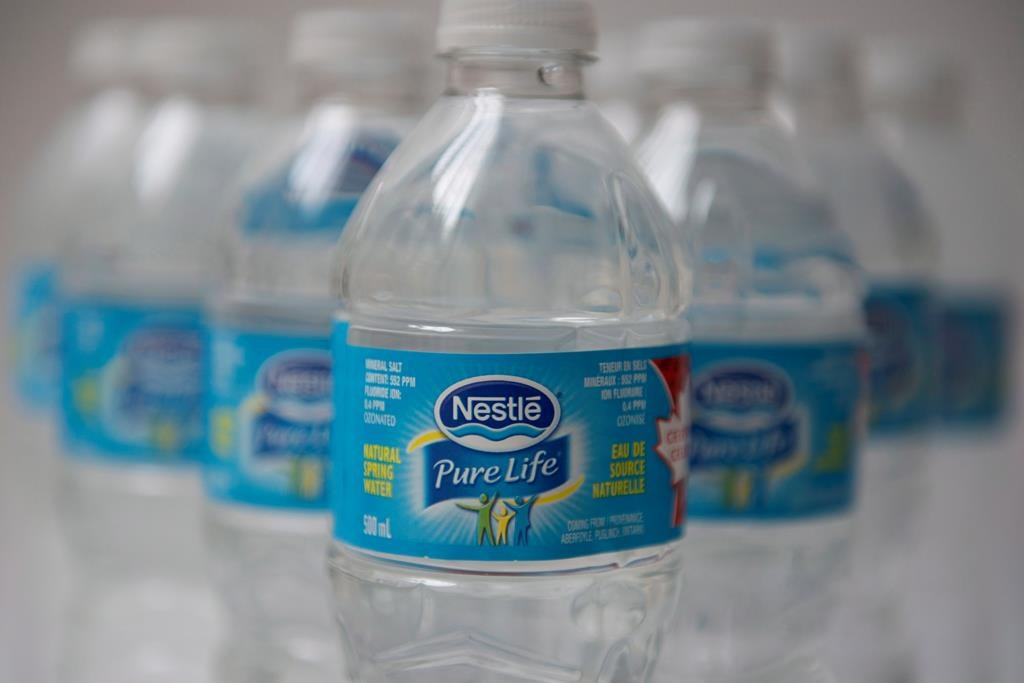 Ontario is proposing to charge water-bottling companies a little over $500 per million litres, up from the current fee of just a few dollars. File photo by Canadian Press
Previous story
Next story

Ontario is proposing to charge water-bottling companies a little over $500 per million litres, up from the current fee of just a few dollars.

Public outcry erupted last year over the small fee of $3.71 that the province currently charges for every million litres on all water-taking permits.

A proposal to increase the charge to $503.71 per million litres for water-bottling companies who take from groundwater was posted Wednesday on the regulatory registry for a mandatory 60-day comment period.

The government is still reviewing other types of water-taking permits, such as ones for industrial purposes.

The current charge of $3.71 per million litres of water is on top of a fee of $750 for low- or medium-risk water takings, or $3,000 for those considered a high risk to cause an adverse environmental impact.

The province has already proposed new restrictions for bottled water companies who want to renew permits and it has imposed a two-year moratorium on permits for new or expanded bottled water operations after Nestle purchased a well that the township of Centre Wellington wanted for its growing community.

Nestle Waters Canada has said it wants to partner with Centre Wellington on the well the company purchased.

Nestle has also previously said that it would be prepared to pay more for permits if rates were increased, but only if all companies with water-taking permits face the higher fees.

Environmental Defence called the new fee good news, noting it would be the highest in Canada, but said Ontario still needs to better protect communities' access to clean drinking water and should give priority to "beneficial" uses such as agriculture over water bottling.

The group also called for Ontario to put a deposit on plastic bottles, similar to what is in place for liquor and beer bottles. Premier Kathleen Wynne has spoken about a need to look at the culture around bottled water.

"Why are we all drinking water out of bottles when most of us don't need to?" she said in a year-end interview with The Canadian Press. "I think we need to have a bigger look at the whole industry, and our role in regulating it."

But critics say simply charging companies more won't protect the water, while some environmentalists are pushing for a total ban on giving permits to companies that remove the water for bottling. Environmental group Wellington Water Watchers has said that increasing the price for permits for bottled water companies won't address concerns about water use.

"No price would be high enough to stop some companies from doing what they're doing because the profits are so high," Water Watchers chair Mike Nagy has said.

British Columbia charges $2.50 for every million litres, while Quebec charges $70 and Newfoundland and Labrador recently introduced a fee of $500 per million litres for water bottlers and $5 for other commercial purposes.

Municipalities, mines, construction companies and golf courses — in addition to the water-bottling companies — are allowed to take a total of 1.4 trillion litres out of Ontario's surface and ground water supplies every day.

Too little, too late. Even

Too little, too late. Even without discussing the value of the water to the environments it is being drained from (it is indespensible and there is nothing else in nature to compensate with.), there is no excuse for bottled water in the vast majority of the country and the billions of bottles have created an ecological nightmare. Toxins and emissions from making the bottles and transporting them around for filling, distribution centers, stores, homes, recycling depots, and final destination, to name a few, plus more in the recycling process. The majority end up as litter or in landfills. Those believing this water is somehow better than what comes out of the tap should be look into the differing requirements between bottled and tap water. Look up the toxicity of the plastic code off the bottles. Why do canned foods have dates but bottled water doesn't? The water in the bottles may have been marinating in that toxic bottle for YEARS, been exposed to extreme heat during shipping (potentially releasing more toxins from the plastic) and even stored outside in the sun. In hot countries, these risks are compounded. Have independent studies been done on the long-term effects of humans (not lab-tortured non-human species) ingesting from plastic? Given that even "fresh" fruit/veg is being sealed in plastic, it is astonishing how few people give it any thought. If there are any links to the huge increase in cancers, allergies, asthma, autism, etc, I want to know.