Six things you need to know about Kevin O'Leary 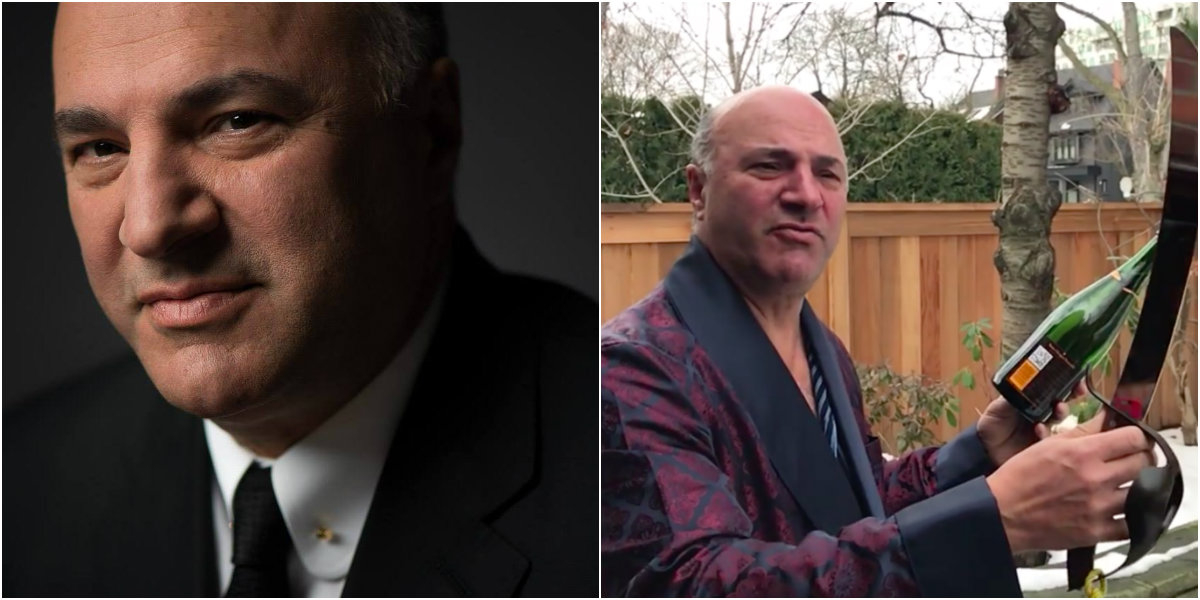 Kevin O'Leary announced his intention to run for leadership of the Conservative Party on Wed. Jan. 18, 2017. Images from Kevin O'Leary's Facebook
Previous story
Next story

It's official: After months of teasing, Kevin O'Leary finally threw his hat in the ring for the Conservative Party leadership, shaking up a crowded race with no clear front-runner.

"Thank you to the 40,000 of you who went to my website and encouraged me to do," the former Dragon's Den star announced in a video to his fans on Wednesday. "What an opportunity we have in this country. Limitless bounty. Such opportunity we have to turn it around. I'm so excited. It's time. I'm dropping into this race right now."

Public reactions bombarding his Facebook page ranged from, "Thank God," and "Make Canada great again," to "We can do better than this," and "He does not care about you."

So does O'Leary, the self-proclaimed 'Mr. Wonderful,' have what it takes to beat Prime Minister Justin Trudeau, who he derided (as many candidates did in 2015) as "Bambi" and "surfer dude?" Is Canada destined to be governed by a reality TV tycoon, mirroring events in the U.S.?

Here are six things about O'Leary you need to know, even if his brand of conservatism is not your cup of Timmy's.

According to an in-depth profile by National Observer's Bruce Livesey, O'Leary's business career has been through major ups and downs. A 2009 TIME profile also noted that O'Leary's real-life business performance has been "spotty," in contrast to his TV persona.

In 1983, O'Leary formed SoftKey Software Products in the basement of his Toronto home, convincing computer companies to bundle his software into their products. At first, it was a big success, trading on Nasdaq 10 years later and boasting revenues of $110 million — and a loss of $57-million. The company grew by making a string of acquisitions, most notably taking over San Francisco-based The Learning Company (TLC) in 1995 and taking on its name.

But under O'Leary's leadership, SoftKey made some blunders, like dramatically dropping the price of its educational software products, leading the company to post heavy net losses in following years. O’Leary also slashed SoftKey’s research and development budget to 11 from 24 per cent of expenses, and also allegedly took old software packages that were not selling, updated the code, and put them in new boxes for resale.

When toy giant Mattel bought TLC in 1999, it was later labeled by Businessweek magazine as one of “the Worst Deals of All Time.” Shareholders launched a class-action lawsuit that named O’Leary as a defendant and accused him of obscuring TLC’s troubled financial state. The difficulties at TLC led to the demise of a burgeoning education software industry, once known for hit games like Where in the World Is Carmen Sandiego? and The Oregon Trail.

O'Leary again ran into trouble with investors after creating his own mutual fund company, O’Leary Fund, in 2008. He first boasted he wouldn't “grind the capital” of investors, meaning he would not pay back to investors their own principal to meet dividend demands, then proceeded to do just that. O'Leary eventually sold his business to fellow Dragon's Den panelist Brett Wilson's Canoe Financial in 2015.

2. He can take an insult

O'Leary relishes the story of having been once called an "asshole" by a Dragon's Den viewer in the men's washroom at Toronto’s Pearson International Airport. To our knowledge, O'Leary didn't harass him on Twitter afterward, like Trump tends to do to people who bruise his ego.

According to his 2011 book, Cold Hard Truth: Business, Money & Life, O'Leary wasn't bothered by that insult because his 'asshole' behaviour is simply him speaking "the truth." O'Leary has also called Conservatives 'losers' whose brand "means nothing" in an interview with Toronto Life last August.

O'Leary calls himself an "Ecopreneur" according to his CBC profile, which says he's "always looking for deals that make money but help the environment."

He received an Honors Bachelors degree in environmental studies and psychology from the University of Waterloo in 1977. At the same time, he's been a big critic of government measures to help the environment, calling the carbon tax a measure that would send Canada into "oblivion," and trashing Alberta Premier Rachel Notley for not doing enough to stand up for the oil industry. Around this time last year, he even offered her $1 million to quit being premier — an offer she never took, reminding O'Leary that the last time a group of wealthy tycoons tried to tell Albertans how to vote, she led her team to a crushing victory to become the province's first NDP premier.

The profile of O'Leary in TIME magazine also noted that O'Leary's self-description as an "ecopreneur" is problematic, given that many of the investments he made through his O'Leary Funds firm were in coal companies and other large polluters. But he continues to praise ecopreneurs for advancing CO2 scrubbing technology.

Even though he's also a rich, brash, right-wing TV personality, O'Leary has made it clear that while he admires the man he calls "King Trump," he's not some Canadian version of the president-elect. And he's probably right — if targeting immigrants and foreigners was a major hallmark of the Trump campaign, no Conservative candidate has done a better job of replicating this than Kellie Leitch, who continues to stress her "Canadian values" policy.

In O'Leary's new campaign website bio, he mentions his Lebanese and Irish immigrant parents, and boasts about living in countries like Egypt, France, Tunisia, Ethiopia and Cambodia. Even though he's made controversial remarks on TV, he hasn't said anything to win an endorsement from Canada's white nationalists.

"He shows no interest in exploiting fears of immigration or crime, for example. But while that may make him a better man, it limits his potential as a demagogue. Whatever his many failings, Trump has undeniable political talents, above all utter shamelessness. O’Leary shows early signs of deficiencies in that regard."

5. He didn't invest that much on Dragons' Den

In 2006, O’Leary was cast on Dragons' Den for its first season, taking on the role as the "resident asshole." But as Livesey's report details, O'Leary rarely invested with entrepreneurs who appeared on the show, and sometimes brushed off sound business projects. When jewelry maker Rachel Mielke appeared on the show in 2008 seeking $200,000 for a 20 per cent stake in her company, O'Leary openly derided her when she said her company was valued at $1 million.

Ultimately, Dragon Brett Wilson backed her company, which shot to sales of $5 million by 2014.

Meanwhile, O'Leary had agreed to give Wendy Johannson and Claudia Harvey $50,000 when they went on the show in 2009 for their company, DigIt Apparel Inc. On air, O’Leary agreed to give them the money in return for three per cent of royalties, and after the show, they agreed to give him 10 per cent of their company. But the $50,000 never materialized, and O'Leary told Globe and Mail in 2012 that Harvey had wanted to use his money for inventory, which he didn't believe was a good use of the cash.

O'Leary suggested in a recent interview with CTV's Evan Solomon that the Senate should be reformed by letting candidates buy their seats. He said he feels "frustrated" that he can't spend his own millions in his campaign, and that as long as candidates disclose who they received their money from, corporate donations should not be a problem.

So... does O'Leary have your vote?

Did Kevin O'Leary once wipe out an entire industry?

No. O'Leary would not earn my

No. O'Leary would not earn my vote. He just does not come across to me as a person who would put the best interests of the country and environment over his own need for validation. He does not play well with others and is overconfident in his own opinions as is evident in his media persona and personal statements.
A government is successful with a team of dedicated, intelligent people who are willing to do the hard work to become expert in their portfolios. Their prior career must have prepared them for the level of skill and experience necessary to make hard decisions.
Most importantly There must be an honest intention to improve Canada, not to milk the cash cow doners by selling influence. The voters will no longer tolerate that.

In addition to Val Harrison's

In addition to Val Harrison's excellently worded comment, I would add that the population and the media often celebrate people for their amazing intelligence, based on how much money they have made. If the guy is rich, we often assume he must be really smart. (I use the male reference because we don't seem to think this way about women.)

We often do not bother to ask whether the guy has done really well for himself, simply because he has had no compunction about walking away with other people's money, or about cannibalizing the creative work of other people, or about putting thousands of people out of their jobs. When we dig deeper into the history of people such as Kevin O'Leary, we find they have been very destructive, and are not actually all that good at business according to those who have actually worked with them.

There is another tendency in the population to accept that politicians are just self-serving people who have no business sense. If only we could replace them with smart people like Kevin O'Leary.

We need to remember that the more successful politicians and leaders in today's society, have developed and honed their skills over decades of social service and political participation. There is a huge difference between running a company and being a professional politician, and the smarter corporate executives know that.

I sometimes fancy running for office myself, until I start to think about how long it would take me just to figure out how to be an effective politician, let alone a prime minister.

Kevin, enjoy your money and leave Canada be. Let's find some experienced people who really are smart, and are trustworthy and effective enough to lead our country.