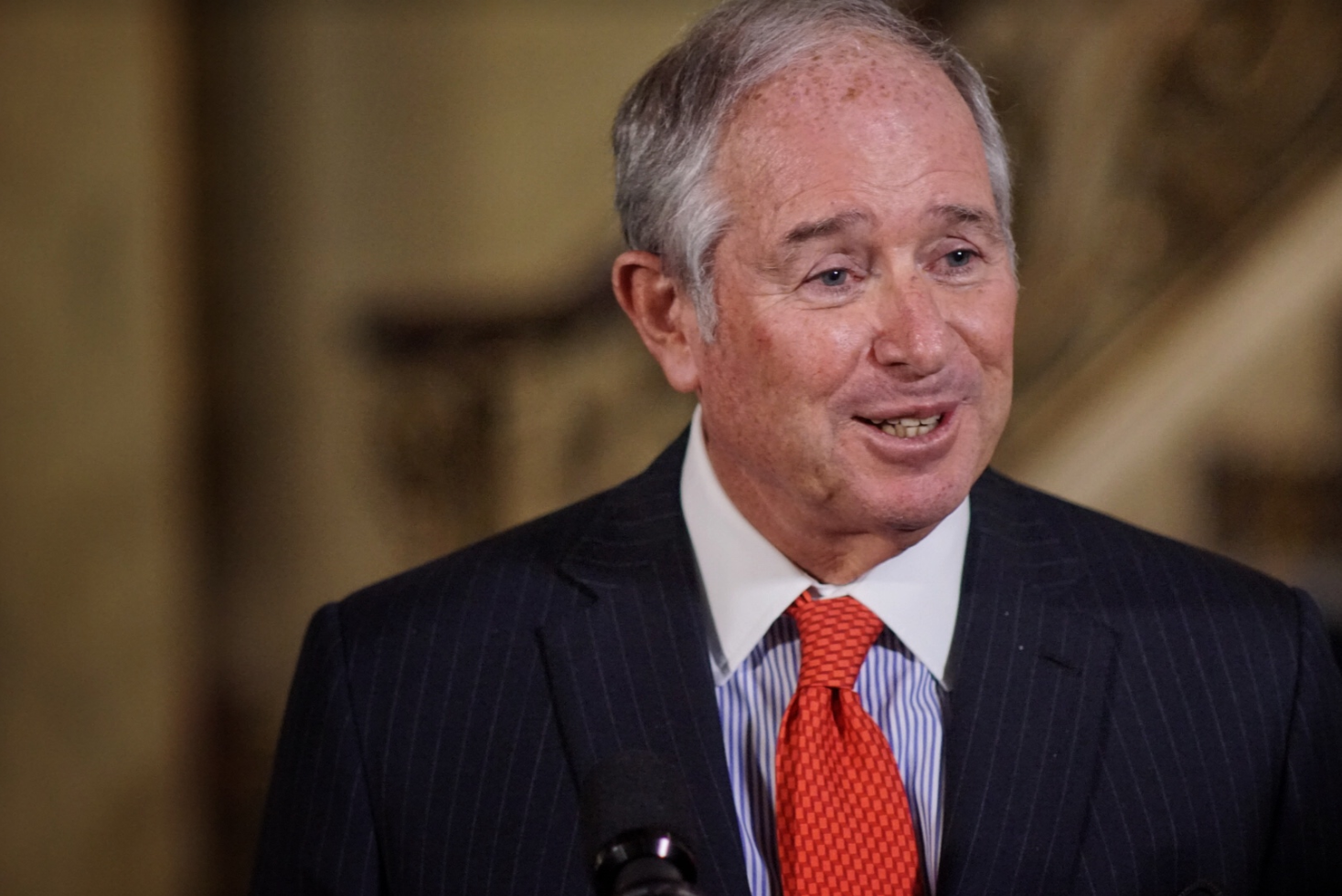 Stephen Schwarzman was appointed to lead President Trump’s strategic and policy forum. He spoke with Canadian reporters at the federal cabinet's retreat in Calgary on Mon. Jan. 23, 2017. Photo by Louie Villaneuva.
Previous story
Next story

One of President Donald Trump’s top advisors assured the Trudeau cabinet Monday that Canada’s relationship with the United States is strong and collateral damage from trade negotiations will be “very low.”

Prime Minister Justin Trudeau and the federal Liberal cabinet kicked off a two-day retreat Monday in Calgary by meeting Stephen Schwarzman, the chief executive of the Blackstone Group investment firm who was appointed to lead Trump’s Strategic and Policy Forum — a group of 16 business leaders working to drive growth and create jobs in the U.S..

Schwarzman said he didn’t think Trudeau or his cabinet should be worried about Canada’s relationship with the U.S.

Canada held in "high regard"

“Canada is held in very high regard,” he said. “We have balanced trade between the U.S. and Canada. There will be other countries with large trade imbalances and other types of markets which aren’t as open as Canada that will be more of an area of focus for the new administration. Canada finds itself frankly in a very special status.”

“Our goal of course with the U.S. administration will be to engage to ensure we have a really strong relationship to ensure we put forward the interests of Canadians and make sure that all of us understands how many Canadian jobs and how many U.S. jobs are in existence because of our very strong trading relationship,” said Minister of Finance Bill Morneau.

Natural Resources Minister Jim Carr, who attended the inauguration last week, said there’s an acknowledgement by American officials that the energy economy between the two countries is linked.

“When we create important jobs, it benefits both sides of the border,” he said.

Americans have "enormous" admiration for Canadians

“We had a very good meeting,” Schwarzman told reporters in Calgary after meeting with Trudeau and members of his cabinet.

The U.S. businessman acknowledged there’s often a lot of concern by Canadians, but noted that Americans have “enormous admiration” for Canada.

“Our commercial linkages, our cultural linkages with Canada are such that some people aren’t aware it’s not part of the United States some days,” he said with a chuckle. “I know that’s not appreciated in some cases here, but there’s a sense of enormous connection with Canada — a connection with trust and productivity, so I think that serves Canada extremely well.”

There have been some concerns from businesses about Trump’s comments that he would reopen negotiations on the North American Free Trade Agreement or impose a border tax. Schwarzman wouldn’t comment on any modifications, but he suggested Canada wouldn’t suffer.

“It’s very low in terms of collateral damage,” said Schwarzman. He noted that the the Trump administration’s intends to dramatically increase U.S. economic growth rates and said Canada could benefit from that.

Carr said the Trudeau government remains committed to the approval of the pipeline.

“We believe it’s very important for the energy economy, particularly in western Canada, to have access to these markets,” he said.

Environment and Climate Change Minister Catherine McKenna said she believes there are other opportunities for Canada and the U.S. to work together.

“The environment and the economy do go together,” she said, noting she has recently returned from the World Economic Forum where conversations were focused on businesses around the world and how they were moving forward to take climate action.

McKenna not deterred by Trump's stance on climate

Despite Trump’s skepticism on climate change, McKenna said she sees commonalities between Canada and the U.S. administration.

“They want good jobs, they want investments with infrastructure,” she said, noting that could mean more clean power and more hydro.

McKenna added that Trump’s indication he would keep coal-fired plants wouldn’t deter Canada’s plans to phase them out.

“Companies are moving in that direction — the investments in the U.S. in the renewables sector, it’s one of the fastest growing sectors.”

Part of energy security must be renewables and clean power, she said: “That’s certainly a priority for me — to find areas where we can work together with the U.S. and make sure we have clean air to breathe and we also create good opportunities and good jobs."

Over the past year, she noted that they spent a lot of time telling people — including Albertans — that the economy and the environment go together.

“You need to do both,” said McKenna. “There’s a huge opportunity for us to work with the United States.”

Trudeau cabinet retreat to confront the reality of Trump's presidency

Trump presidency: "It's going to get worse before it gets better"

In renegotiating NAFTA or a

In renegotiating NAFTA or a bilateral trade agreement, I would hope that the Investor Dispute (ICSID) Rules, such that transnational corporations or nation states not be allowed to sue for Canadian taxpayer funds for legislating environmental/climate/species/labour protections.