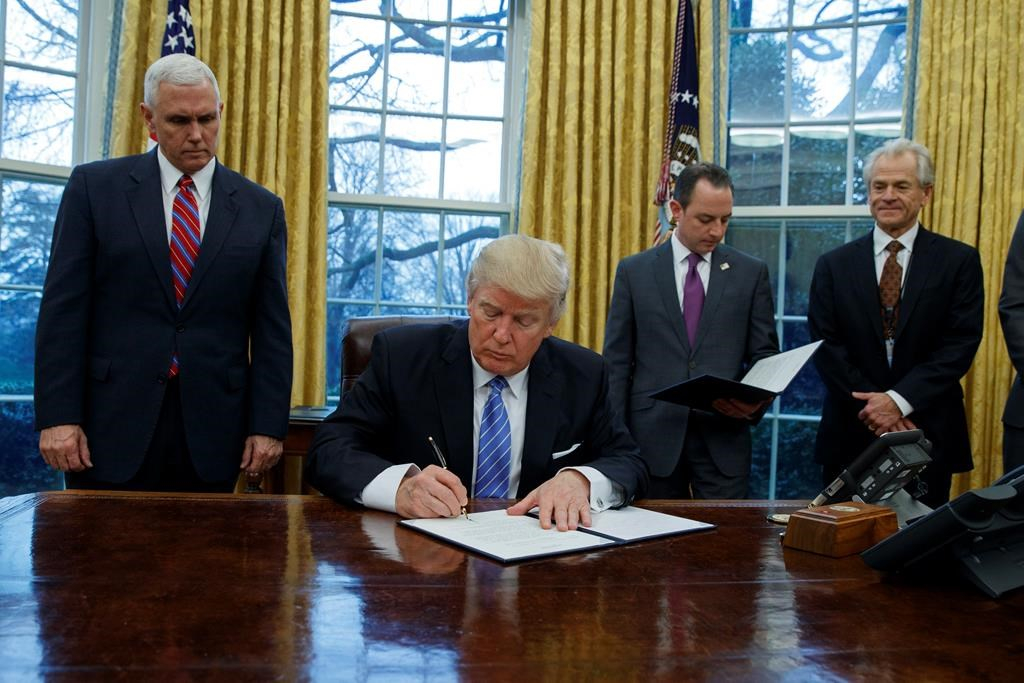 Trump called the move "a great thing for the American workers."

But at least one Canadian trade expert said it heralds more trouble on trade, including the North American Free Trade Agreement between the U.S., Canada and Mexico — another deal that Trump has in his sights.

"It reflects a disdain for open markets and liberalized trading arrangements and the manifestation of Mr. Trump's 'America First' policy," Toronto trade lawyer Lawrence Herman said of the decision.

"It signals storm clouds ahead for the NAFTA. Canada needs to be prepared if the U.S. decides to pull the plug on that deal."

It remains unclear if Trump would seek individual deals with the 11 other countries in the TPP, a group that includes Canada and represents roughly 13.5 per cent of the global economy, according to World Bank figures.

There was no immediate comment from Prime Minister Justin Trudeau or Foreign Affairs Minister Chrystia Freeland, who are in Calgary for a two-day cabinet retreat where how best to deal with the Trump team is the main preoccupation.

Canada had been taking a wait-and-see approach to the TPP, with the Liberal government launching a sweeping consultation that appeared designed to postpone a decision until the U.S. resolved the question of whether or not to take part.

Asked whether the government believes the deal can be salvaged, Freeland spokesman Alex Lawrence would only say, "The agreement cannot enter into force without the United States."

Canada's trade department said in a study last year that the TPP would generate more than $4 billion in long-term GDP gains for the Canadian economy but would lead to the loss of $5 billion if it did not join the deal.

Canada's participation in the TPP was cemented by the previous Conservative government two weeks before they lost power in the October 2015 federal election.

The incoming Liberals affirmed they, too, were ardent free traders, but said they wanted to consult widely before the deal was implemented. The Liberals have also said the TPP would not survive the withdrawal of the U.S.

Freeland — in her previous role as trade minister — has already said that the TPP can only come into force if ratified by six of the 12 member countries representing 85 per cent of their combined GDP.

Trump has blamed past trade deals such as the North American Free Trade Agreement and China's entrance into the World Trade Organization for a decline in U.S. factory jobs.

The signing of the memorandum Monday is basically a formality, since the agreement had yet to receive required Senate ratification.

Trade experts say that approval was unlikely to happen given voters' anxiety about trade deals and the potential for job losses.

Trump presidency: "It's going to get worse before it gets better"

The implications for Canada of a fast-tracked Trans-Pacific Partnership

Good!! He will protect us

Good!! He will protect us from the corporate power grab if our own politicians won't. I suspect the corporate world will start telling him what to do soon.