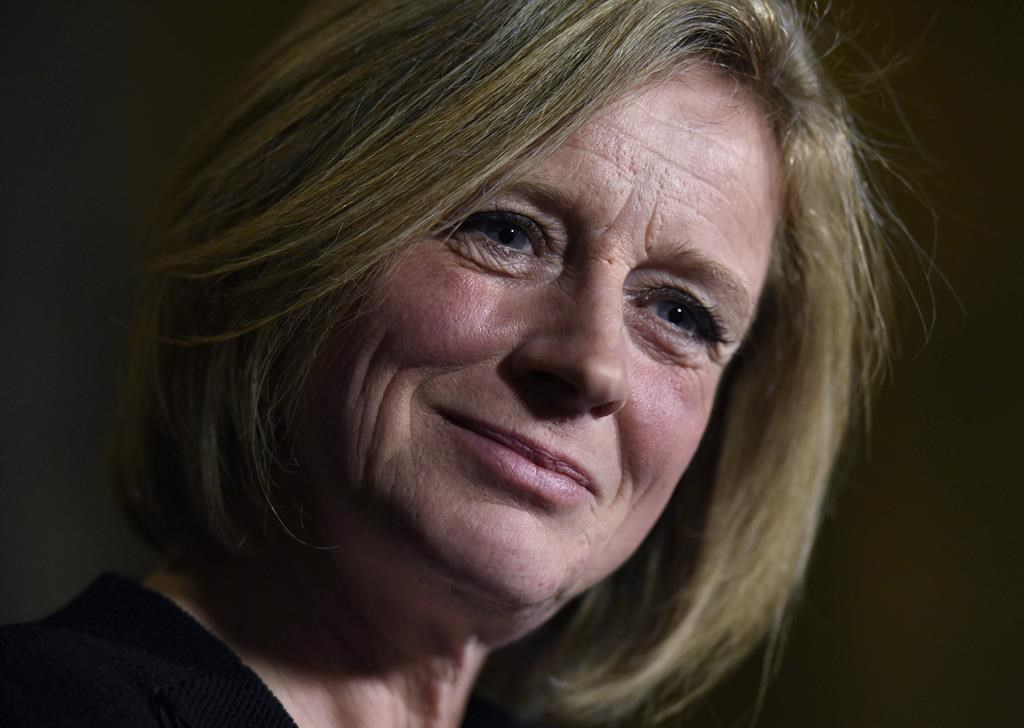 Alberta Premier Rachel Notley welcomed news of the Keystone XL pipeline's revival south of the border on Tuesday, hailing U.S. President Donald Trump's support for the project as a "good first step" for her province.

In a press conference in Edmonton, she told reporters that the embattled pipeline project — rejected by former president Barack Obama in November 2015 — could help increase the sale price of Alberta oil, which is something province's economy desperately needs. According to Statistics Canada, unemployment in Alberta hit a 22-year high in 2016, and the Keystone XL pipeline promises to bring thousands of jobs to Canadians during its construction.

"We welcome this news from the U.S. We will support our energy companies however we can to make sure this pipeline moves forward," she said. "This project is going to create good jobs here in Alberta, and that's my focus."

Bringing jobs back to Alberta

On Tuesday morning, Trump signed a presidential memorandum inviting the Calgary-based TransCanada to resubmit its application to the U.S. State Department for a presidential permit to build and operate the 1,897-kilometre Keystone XL pipeline, which would ship crude oil from Hardisty, Alta. south to Steele City, Neb. The memorandum gives the Secretary of State 60 days to determine conditions for the project and reach a final permit.

Keystone would allow Canadian producers to bypass American refineries in the Midwest – where much of the oilsands product now goes – and instead ship oil from the Gulf Coast to overseas markets, where it can be sold at a higher price. Diverting that oil from the American market could also increase the price of gas in parts of the U.S., several studies have found.

If approved, the pipeline promises to bring some 4,500 jobs to Canada, although Trump promised the pipeline parts will be built in the U.S. While signing the document, he said he wants to "renegotiate some of the terms" of the project, but did not elaborate on what that meant.

Notley said she was not "completely unconcerned" by those comments, but added that she wouldn't speculate about how the Trump administration planned to handle the deal.

"I think that the facts are in the favour of Canada. I'm not going to talk about what is going to happen from the U.S. and or what decision they will or will not make because I can't begin to predict that," she said.

"It's a good day for Alberta and a good day for Canada," Natural Resources Minister Jim Carr said at a federal cabinet retreat in Calgary on Tuesday. "I'm very glad the prime minister and the cabinet are here, because this decision will result in many, many jobs for Albertans."

Nenshi said approving the pipeline would help to create more jobs in Calgary, which has had the highest unemployment rate of any large city in Canada since July 2016.

Jean said the pipeline memorandum is "good news" for Alberta, but reminded his constituents that Notley has not always supported Keystone XL. He posted a video on his Facebook page showing Notley's opposition to the project as it would give more jobs to Texans than Albertans.

She responded: "I think we have to understand that the situation has changed pretty dramatically from when Keystone was first the subject of discussion," Notley said. The NDP's past opposition to the project "was a position that was developed when oil was $100 a barrel, and now it's not," she said.

Sam Karnick, director of research with libertarian think tank The Heartland Institute, said Trump's decision to move ahead with the Keystone and Dakota pipeline projects is part of a "clear program" to stimulate job growth in the U.S.

The Heartland Institute, which leans in favour of the oil and gas industry, has in previous years been funded by Koch Industries to the tune of US$30,000, according to a Greenpeace investigation.

Koch Industries, run by the billionaire American Koch brothers Charles and David, has been accused in recent months of meddling with Alberta politics by attributing withdrawal from a local oilsands project directly to the Alberta NDP climate plan rather than slumping global oil prices.

"In order to get more jobs, Trump appears to have realized the obvious, that if you can cut costs in any way, you're certainly helping that process," Karnick told National Observer, "because it's always at the margins that decisions are made."

Notley also said Alberta can build the pipeline and still stick to its climate change plan, which caps oil sands emissions at 100 megatonnes of carbon dioxide per year. According to environmentalists, that's impossible.

“The Alberta government's claims of being a climate leader ended today,” Greenpeace campaigner Mike Hudema said in an interview on Tuesday. “It's profoundly disappointing to see the NDP government willing to work with President Trump to build this pipeline, and it's also a betrayal of their own voter base”

Increasing pipeline capacity will “of course” increase emissions, Hudema told National Observer, vowing that environmental groups and First Nations will stop the Keystone pipeline again, just as they had the last time.

TransCanada could not be reached in time for comment on this story, but in a statement, the company said it was preparing to apply for a presidential permit to build the pipeline, which it said would help to create "thousands of well-paying construction jobs."

— with files from Elizabeth McSheffrey

I don't know why Ms. Notley

I don't know why Ms. Notley thinks that bringing more oil to the U.S. will increase the price of Canadian crude. Trump has already give American producers the permission to drill as much as they can, slashing any environmental regulations and opening all federal lands to drilling. This will produce a flow of oil which in return will push down the price of the barrel of oil. The price of oil went down in 2015 because there was to much oil on the market. Canada and the U.S. were asking foreign oil producers to cut production to allow prices to go up (without asking their own producers to cut their output).
Canadian oil producers can effectively ship their crude to foreign countries from U.S. port facilities (if not mixed with U.S. products). During the summer of 2014, as the price differential between the WTI and Brent was at its highest, Canadian oil producers managed to get some crude to countries other than the U.S. (Globe and Mail, Nov. 02, 2104: "Oil sands crude reaching Europe, Asia"). Non-USA exports totalled 29 million barrels that year, which represented around 2.8% of Canadian total oil exports. Of that amount, only around 2.3 million (0.8%) barrels, was "bitumen and blend bitumen", the balance consisted entirely of conventional light (source: NEB's "Estimated Canadian Crude Oil Exports by Type and Destination").
In 2015, Canadian shipments of crude oil to the rest of the world accounted for only 0.8% of total exports, or on average around 25,500 barrels per day.
In the first two months of 2016, exports averaged 3.28 million barrels per day, partly due to marine exports from the Maritimes to the U.S. East Coast. The U.S. Midwest region (PAD II) remains the largest market for Canadian exports, comprising nearly two thirds of total exports in 2015. Deliveries to the U.S. Gulf Coast have more than tripled between 2013 and 2015, enabled by the establishment of major new U.S. felines between the mid-continent and the Gulf Coast (NEB's Market Snapshot, 2016-04-22: Canadian crude oil exports hit record in 2015 led by higher deliveries to the U.S. Gulf Coast").
In December 2015, the U.S. congress lifted its crude oil export ban allowing U.S. oil producers to export their crude to foreign countries other than Canada. As Canadian oil exports to countries other than the U.S. remains low, U.S crude oil exports to foreign countries are up. By 2015, the U.S. was exporting 422,000 b/d to Canada and a total of 26,000 b/d (similar to Canada) to five other countries. In May 2016, U.S. crude oil exports to countries other than Canada reached 354,000 b/d, 46,000 b/d more than crude oil exports to Canada ( U.S. Energy Information Administration, August 16, 2016 : "U.S. crude oil exports are increasing and reaching more destinations").
The future of U.S exports will depend on Mr. Trump policies on energy. We already know that he wants to replace crude oil imports by U.S. oil, displacing imports from other countries which might include Canada. If on the contrary, he allows more U.S. crude to be shipped outside the country, Canadian oil producers will have to face another major competitor on the international market.
In both scenario, Canadian oil producers will face fierce competition from U.S. oil producers which have the full support of the Trump administration. That will probably mean that Canadian oil producers will have to continue selling their crude at a discounted price.