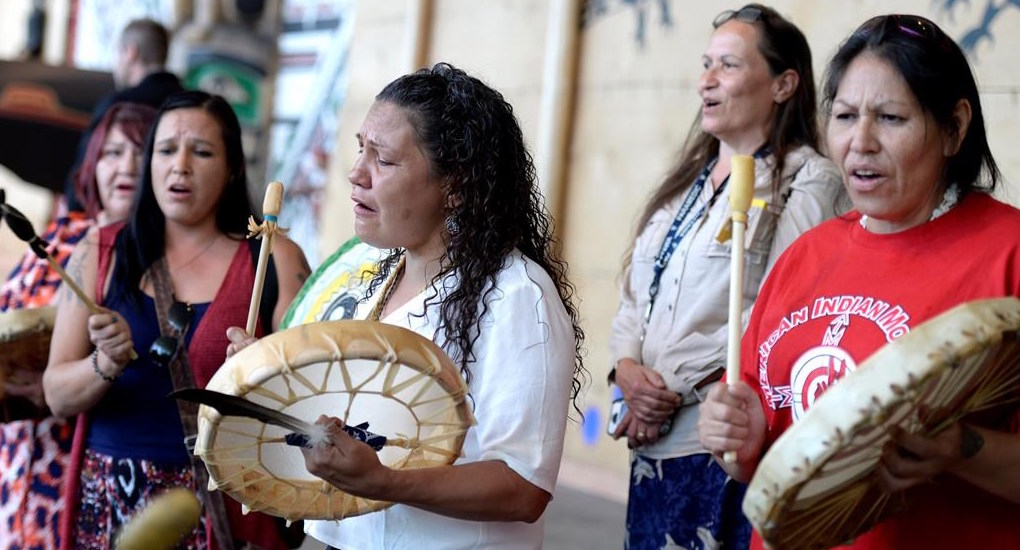 Women drum after the federal government announced an official inquiry into missing and murdered indigenous women at the Museum of History in Gatineau, Que. on Wed. Aug. 3, 2016. File photo by Canadian Press
Previous story
Next story

Canada's National Inquiry Into Missing and Murdered Indigenous Women and Girls has started to hold local meetings in preparation to gather testimony from impacted families this spring.

Michael Hutchinson, a spokesperson for the inquiry, said the meetings are intended to help the inquiry's five commissioners approach the work of collecting testimony in the most sensitive way possible.

“We want to be able to craft our larger events to the regions that they're going to be held in, and to the aboriginal groups that are going to be partaking,” he said in an interview. "That includes looking at local languages and cultural protocols and figuring out how to integrate those when families testify."

"We spoke to a lot of elders and people in the area and we got a lot of good advice. Issues within Quebec, how that region is different from other regions, what are some of the languages and protocols that would be appropriate to use in the region."

The schedule for the meetings has not yet been finalized, he added, but they are expected to last into the spring and will continue as commissioners begin gathering testimony.

Yet despite the news, more than a year after Prime Minister Justin Trudeau first announced his government would hold the inquiry, some families are still asking: Why has it taken this long to get the process moving?

Building an organization "from scratch"

According to the RCMP, at least 1,200 indigenous women and girls who have disappeared or been murdered in Canada since 1980. But Carolyn Bennett, Canada's minister for indigenous and northern affairs, along with several indigenous organizations, have said the total number is likely to be much higher.

Families of the missing women and girls have demanded for years that the federal government launch an inquiry into the crisis, yet it wasn't until September 2016 that the formal process was launched.

Hutchinson said work at the inquiry did not begin until the commissioners were hired in the month after its launch, and could not speculate on why no preparation work had been done before that. He asked the indigenous community for patience, as the commissions are "working, every day."

“We're basically building a national organization from scratch, so there's a lot to do still,” he told National Observer. “As somebody whose family has also experienced these issues, there's a lot of emotion, and feelings of loss and just heartache," said Hutchinson, who is a member of the Misipawistik Cree Nation in Manitoba.

He said that since the launch in September last year, the inquiry has hired staff, named a legal team, set up offices and started biweekly conference calls with national indigenous organizations.

The inquiry has a wide-ranging mandate to hold public hearings across Canada to investigate the underlying causes of violence against indigenous women and girls, who are much more likely to be the victims of violence than non-indigenous women. Its five commissioners have until November 2018 to produce a final report, with an interim report due in November 2017.

It's a formidable task indeed, acknowledged Francyne Joe, interim president of the Native Women's Association of Canada (NWAC), adding that the impacted families really can't afford to wait any longer. She pulled no punches in her critique of the process so far.

"Crickets" from the feds on national inquiry

“Families and national organizations were expecting that 'September' meant they were going to start meeting with families immediately, that staff were already hired, that commissioners were going to have a timetable set in place," Joe said."That still hasn't happened. Instead we heard the crickets going.”

In a report on the inquiry's progress published in early January, NWAC wrote that “a lack of effective and official communication as well as the inability to set timelines and report on progress has wounded families and survivors.” The organization represents indigenous women across Canada.

“For every month that goes by that we're not doing something, it's very frustrating, because we still have indigenous women disappearing,” said Joe. “I don't think (commissioners) were ready."

Indigenous and Northern Affairs Minister Carolyn Bennett and her team held meetings across the country last spring with families of missing and murdered women. Those meetings, which cost $2.3 million, were supposed to help the ministry plan the process for the inquiry.

But when Joe attended an annual vigil in Ottawa last October for missing and murdered indigenous women, Joe said families asked her and other NWAC members for updates on the inquiry, what would it look like and when would they be able to speak. She said she had no idea what to tell them, because NWAC didn't know, and hadn't been able to connect with anyone in the inquiry to ask.

National Observer reached Joe as she was waiting for a flight to the Yukon to meet families who were wondering when they would be able to talk to the inquiry commissioners. Joe said she had also met in December with a group of families from Vancouver's Downtown Eastside who were so frustrated with the lack of information, they were considering about backing out of the inquiry entirely.

“They were actually at the point where they were thinking about being totally disengaged from this, which was disheartening for me,” she said.

Brenda Wilson, whose 16-year-old sister Ramona disappeared in 1994, expressed similar disappointment. When Wilson first heard that the inquiry would go ahead last year, it had been more than two decades since she had last seen Ramona, who went missing from Smithers, B.C. along the notorious Highway of Tears. Her body was found almost a year later.

"When your little one goes missing for five minutes and you find them, it’s a big relief. But for many of our community members, there is no relief," said Wilson. "For loved ones who have been murdered, such as my sister, we still don’t have answers after 20 years."

Wilson said she was ecstatic when she heard the inquiry would go ahead and hoped it would help strengthen the justice system and social services in B.C. available to young indigenous women like her sister. But now, as the families of victims all over Canada wait to provide testimony to the commissioners, she said that hope has been tempered by skepticism.

“They’ve made promises before and not always followed through,” she said. “That’s where we are once again ...waiting and hoping that we will be able to move forward in this whole situation with the inquiry and making sure that it's done properly.”

As it prepares to start collecting formal testimony, the inquiry is planning an advertising campaign to let families know how they can participate, along with an online form that people who want to participate can use to contact the commission.

Hutchinson said the inquiry will meet that deadline: “If it doesn't get done, we're not doing our jobs. It'll get done."

Since NWAC's report was released in January, they have been invited to join conference calls for updates on the inquiry, and more information is now available on the inquiry's website on how and when the families will be involved. Communication with the commission has improved since Hutchinson was hired, said Joe.

Still, she said she is disappointed that the inquiry didn't reach out to her organization and others sooner. NWAC has a long list of families across Canada who are hoping to speak with the inquiry about their missing relatives.

“That's the key thing that families want. To be heard," she explained. "And to know that, out of this tragedy, something productive is going to come out of it, to save future women and girls, so that we don't continue to have this tragedy happening to our communities."

Joe said she was concerned the inquiry would have to rush to complete an interim report, which is due in November. “When you rush in situations like this, mistakes are made,” she said.

By Elizabeth McSheffrey | News, Energy, Politics | December 16th 2016
Reports from the Race to a Safer World

I don't blame Francine Joe for being disappointed in the ridiculous and unacceptable lack of progress in the work of the commission. I'd be pounding on Trudeau's door with a tomahawk if I were in her place!!!!