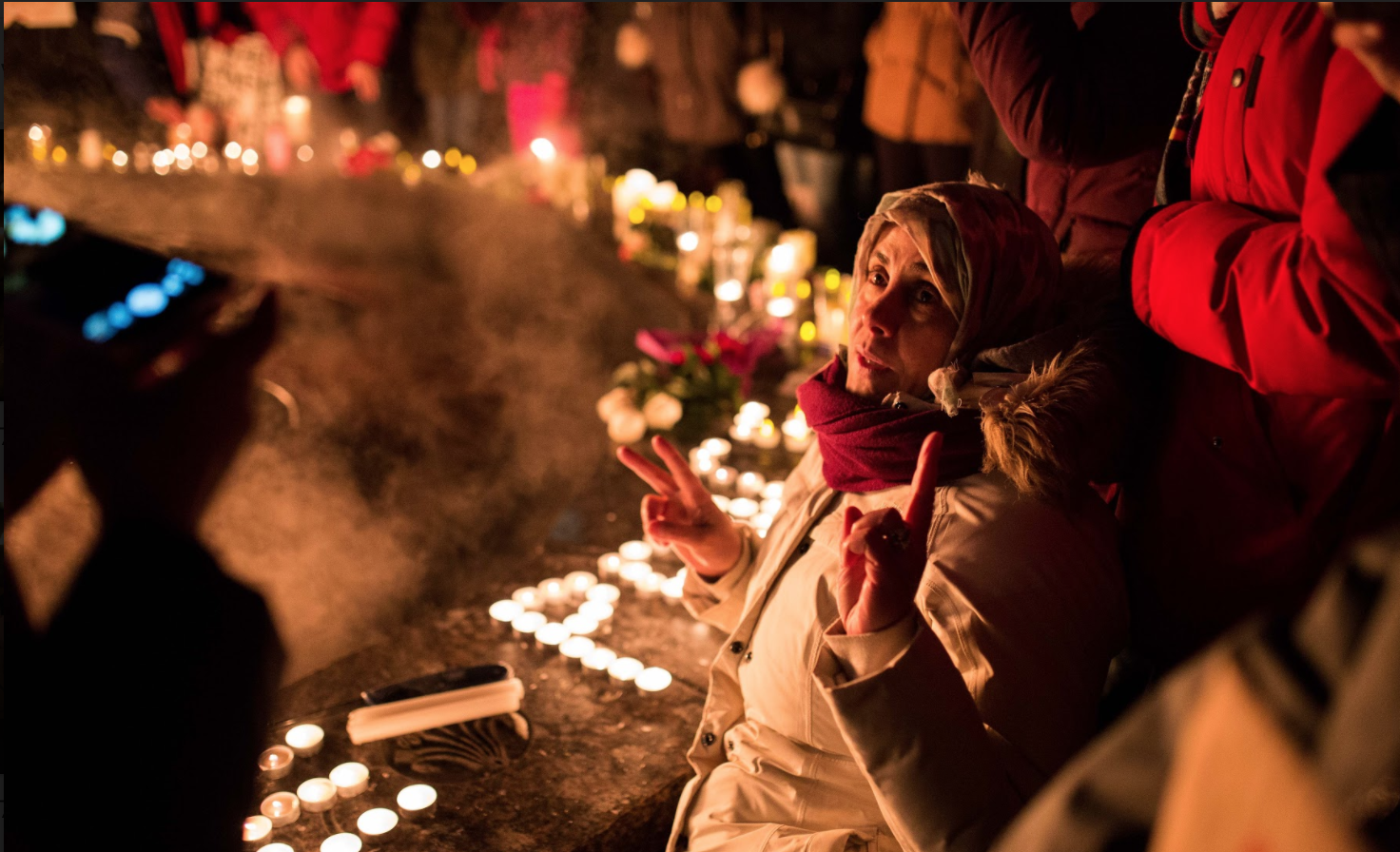 An Ottawa resident offers up signs of peace during a candlelight vigil for those killed in a deadly terror attack in Quebec, Mon. Jan. 30, 2017. Photo by Alex Tétreault
Previous story
Next story

More than 1,000 people gathered around Parliament Hill's Centennial Flame on Monday in a sombre vigil dedicated to the victims, and survivors, of a deadly attack on a Quebec City mosque over the weekend.

Some used small candles to spell the words, 'love' and 'peace' around the glowing fire, while others used signage to send political messages: "I am Quebec," "Death to Fascism," and "Racism has no borders." They heard statements from Governor General David Johnston, Immigration Minister Ahmed Hussen, and Imam Samy Metwally of the Ottawa Muslim Association, among others.

They sang the national anthem. Some prayed, some cried, and some knelt before the flames.

It was a stark contrast from the loud and passionate protest that brought thousands to the U.S. embassy only a few blocks away that afternoon, not only to condemn the deadly shooting in Quebec, but to demand an end to President Trump's travel ban on seven Muslim majority-countries.

Similar vigils were held all over the country on Monday, attracting many thousands in solidarity with Canada's Muslim community.

At around 8 p.m. on Sunday evening, a gunman entered the Centre Culturel Islamique de Québec, and fatally shot six worshippers and wounded 19 more. The suspect, 27-year-old Alexandre Bissonnette, appeared in court on Monday and has been charged for six counts of first-degree murder, and five attempted murders using a restricted firearm. Bissonnette will appear in court again on Feb. 21.

Prime Minister Justin Trudeau has denounced the shooting as a terrorist attack, although neither he, nor police investigating the case have commented on a possible motive for the incident. Media outlets have reported that Bisonnette, a student at L'Université Laval, has "liked" U.S. President Donald Trump on Facebook, along with French politician Marine Le Pen, the separatist Parti Québécois, and the Israeli armed forces. Le Pen, the leader of France's National Front in France who has won accolades from white supremacists, is known for her anti-Muslim, anti-immigrant ideology.

The horrific attack has prompted world leaders to extend their sympathies and launched Canada into a national day of mourning. Trudeau, members of his cabinet, and Canadian party leaders attended memorial ceremonies in Quebec City on Monday evening, and similar ceremonies were held in Toronto, Halifax, and other capital cities.

Canadians will not be broken by this violence. Our spirit & unity will only strengthen – we will mourn, and we will heal, together. pic.twitter.com/TVdFrbuHpq

The names of the victims have now been released: 57-year-old Azzeddine Soufiane, 60-year-old Khaled Belkacemi, 44-year-old Aboubaker Thabti, 42-year-old Mamadou Tanou Barry, 39-year-old Ibrahima Barry, and 41-year-old Abdelkrim Hassane. At least three of them were fathers to children as young as 15 months old.

Mamadou and Ibrahima Barry were brothers from Guinea, Soufiane was a grocer and butcher, Hassane worked as a programming analyst for the Quebec government, and Belkacemi was a professor of soil and agri-food engineering at L'Université Laval.