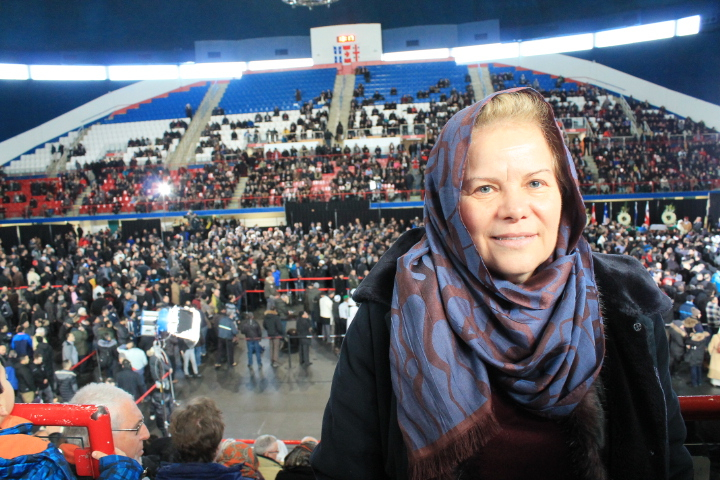 Lina Zaidi is one of several thousand Montreal residents who packed into the Maurice Richard Arena on Thurs. Feb. 2, 2017 to pay their respects to the victims of the Quebec City mosque shooting. Photo by Krystle Alarcon
Previous story
Next story

The mood was sombre, yet hopeful as thousands poured in from all over the city to pay their respects to the men who were killed in Quebec City last Sunday in a terrorist attack at a mosque.

Non-Muslim supporters shook hands with members of the Muslim community, cell phone users documented the ceremony, and others prayed quietly. Some wiped away tears as they knelt and bowed their heads towards Mecca. An Imam led prayers before dignitaries spoke.

The funeral, held for Abdelkrim Hassane, Khaled Belkacemi and Aboubaker Thabti, was open to the public. Visitors also prayed for the other victims, Azzeddine Soufiane, Mamadou Tanou Barry and Ibrahima Barry.

The presence of dozens of officers by the building and nearby metro station put some of the attendees on edge — the devastating attack, which left six people dead and at least 19 wounded, has affected Canadians in different and profound ways. Some people have responded with anger, others with fear, and others with messages of strength and unity.

One mourner at the funeral on Thursday said he's had a hard time explaining the tragedy to his nine-year-old son, who visits the mosque with him often in Montreal.

The mosque is a "place of peace"

"He's in shock," Hakim Sabir said outside the arena. "He said, 'Papa, normally a mosque is a place of prayer, a place of peace but what happened?' He has had nightmares since. He saw everything on TV. It will take time to make him feel safe again, to calm him down."

Sabir said his three children identify as Québécois, even though they are of Moroccan descent. As a father, he has always reminded them they are no different from their friends or schoolmates, but admits that his family has felt secluded lately.

"Now I feel like I'm lying (to them)... after what they see in the media," he told National Observer in French. "This is the fault of the media. They don't describe us properly. Everything is mixed up. People think Islam is a place. But we were attacked in our home countries too, so we don't know who to side with. We're victims too... of these sick people. I call them sick people who use religion. We hope this [Sunday's attack] will shed a new light on us."

Politicians who attended the ceremony delivered parallel messages of embracing diversity and coming together as a community. Quebec City Mayor Régis Lebeaume said it's up to Canadians to "choose to be divided or united," while Prime Minister Justin Trudeau said the tragedy will only make Canada stronger.

"As a community, a country, together we will rise from this darkness, stronger, more unified than ever before," Trudeau told the crowd. "That is who we are."

Both the prime minister and Quebec Premier Philippe Couillard greeted the funeral guests with the Arabic phrase, "As-salāmu ʿalaykum," which means "may peace be upon you." Their speeches ignited cheers from the stadium, as though they were part of an election campaign.

But the crowd roared the most for Montreal Mayor Denis Coderre — the only politician who did not hesitate to call the attack "an act of terrorism, racism and Islamophobia" during the ceremony.

"We did not just lose Muslim brothers, we lost Quebecers," Coderre told the crowd. "We cannot change the world but we can change ourselves. This starts with changing our language and the way we communicate."

Abdel Souleymane, originally from Burkina Faso, said he hopes the politicians' words materialize soon. He attended the funeral with a friend and called on Canada's leaders to monitor the message they send to the media carefully in the months to come.

"They gave us their support but now we're waiting for concrete action," he told National Observer in French. "That means framing things better in the media, not letting certain stories to create malicious images of Islam, in terms of religion versus terrorism."

"We're here to try to evade more situations like this," he said. "Seeing that the primary suspect started everything on social media. We need to perhaps to do more to stop this so it doesn't happen again. So that no one will live again how we live."

Lina Zaidi, who converted to Islam from Catholicism 24 years ago, said she was inspired by the attendance at the funeral. Thousands of people sent thousands of blessings to the deceased on Thursday, which in Islam, increases their chances of entering Heaven, she explained.

The lone suspect in the attack, Alexandre Bissonnette, 27, appeared in court on Monday and has been charged for six counts of first-degree murder, and five attempted murders using a restricted firearm. Bissonnette will appear in court again on Feb. 21.

Five of the six bodies of the victims will be buried in their home countries of Tunisia, Algeria, Guinea, and Morocco.

Since the Sunday attack, one Montreal man has been charged with inciting hatred against an identifiable group and uttering threats, and on Thursday, a Montreal mosque was vandalized. Montreal Police Chief Philippe Pichet said earlier this week the force has seen a spike in the number of reports of hate crimes since the mosque attack.

The head of Montreal's anti-radicalization centre also said this week it had received 24 calls since Sunday, including 10 related to Islamophobia and four related to the extreme right.

One thing I have not heard

One thing I have not heard about from any of the reports is how the accused perpetrator was arrested. Did folks at the mosque take him down? Did he leave on foot? In a car? Where was he arrested?

Politicians have no business

Politicians have no business discussing, legislating funding, advocating for or against religion of any kind, regardless of the religion. This country should have laws separating church and state, in order to ensure clear and unbiased governance. Religion has no place in government or schools. Harper spent tens of millions funding christian religious projects in other countries, which it is part of the neoliberal globalist brainwashing that Trudeau is also determined to ram down the throats of voters. Censoring public discourse has no place in democracies and has a tendency to backfire badly.