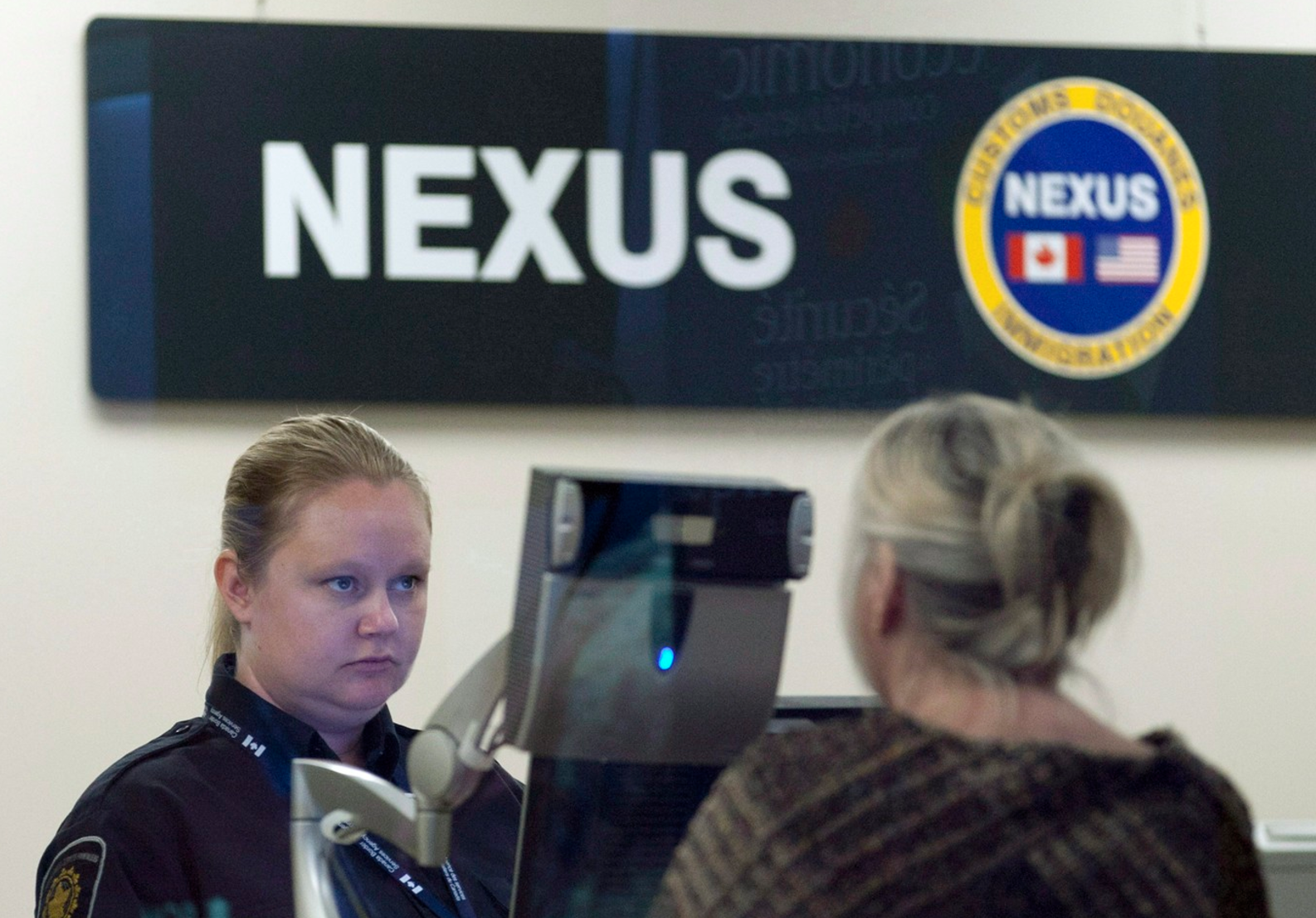 A Canada Border Services Agency officer speaks with a traveller at the Nexus office at the airport in Ottawa on May 8, 2012. File photo by Canadian Press
Previous story

The Liberal government is trying to ensure Canadian dual-nationals can still use their Nexus trusted-traveller cards at the border following word that the cards have been revoked, said Public Safety Minister Ralph Goodale on Friday.

The government will urge American officials to apply the rules fairly in the wake of a Trump administration executive order banning travel to the U.S. by people from seven predominantly Muslim countries, Goodale told the House of Commons.

Conservative MP Michelle Rempel said during question period that doesn't provide much clarity to Canadians wondering if their Nexus card — which allows speedy passage through airports and border crossings — is still usable.

"Has the minister asked for, and received, written assurance that any and all Nexus cards will remain valid in light of the executive order?" she asked.

No confirmation from CBSA

Goodale told the House of Commons that those who hold a Canadian passport — whatever other national connections they might have — continue to enjoy the same access to the United States they always did. The Nexus card, on the other hand, is a special provision "over and above the passport," he said.

"We want to make sure that Canadians entitled to a Nexus card, which is discretionary on both sides of the border, are in fact treated properly and fairly."

As of December, there were almost 1.5 million members in the Nexus program — about 80 per cent of them Canadians. In a statement, the Canada Border Services Agency said it is aware of "some members having their Nexus cards removed and/or denied. There are a number of reasons a membership may be revoked and a membership may be declined."

However, a border agency spokesman could not immediately say whether the White House travel order would be sufficient grounds for revoking a Nexus card.

"CBSA continues to work closely with our U.S. counterparts with all cross-border matters to ensure that safety and security of our respective borders are maintained while facilitating legitimate travel and trade to ensure economic prosperity," the agency's statement said.

Some 400,000 people and over $2 billion in goods and services cross the Canada-U.S. border every day.

The NDP pressed Goodale on Friday about another provision of the White House's executive order on immigration that could eventually see all visitors entering and leaving the United States be subjected to biometric screening, such as fingerprint or iris scans.

"How will these screenings impact our industries that depend on speedy border crossings?" asked New Democrat MP Murray Rankin.

Goodale said he "specifically raised the issue" of the biometric screening provision during a discussion this week with new U.S. Homeland Security Secretary John Kelly, and requested clarification from the United States.

"We want to be completely informed about what it has in mind," Goodale told MPs.

Global Affairs Canada says Foreign Minister Chrystia Freeland stressed the importance of efficient border measures during a phone call Thursday with her U.S. counterpart, Secretary of State Rex Tillerson. A summary of the call says the two highlighted the progress of recent pre-clearance measures, as well as the need for a safe and secure border that does not hamper the flow of goods and people.

Questions circulating about the ban's impact on Nexus cards comes just as an Iranian citizen who was awarded a full scholarship last year to complete his PhD in economics at the University of Minnesota started applying at Canadian institutions.

Mahdi Ebrahimi Kahou told The Canadian Press he watched his dream of completing his degree at one of the top universities in his field of study evaporate with a stroke of U.S. president Donald Trump's pen. The 29-year-old has been living in Minneapolis on a student visa, but Trump's executive order barred entry to citizens of Iran and six other Muslim-majority countries on any visa category for 90 days.

His common-law wife and stepdaughter live in Calgary and he's now applying to Canadian schools including the University of British Columbia and University of Toronto. Universities Canada president Paul Davidson has said the order has had an immediate, profound effect, with the number of U.S. students applying to study in Canada next fall surging.

Some universities and faculties have extended application deadlines for foreign students in order to accommodate those displaced by the U.S. order, including McGill's graduate law department.

Ontario's health minister has also said the province is working to determine what can be done to help children scheduled for specialized life-saving surgeries in the U.S. who are being affected by the travel ban. Health Minister Eric Hoskins says it has come to the government's attention that some of these children are being turned away solely because of where they were born.

Hoskins says Ontario has an obligation to respond. He says in a statement that the ministry is working on a broad humanitarian response to provide life-saving care to children whose surgeries have been cancelled.

Hoskins says ministry staff are working with their federal partners and hospitals, primarily the Hospital for Sick Children in Toronto, to determine whether there is an opportunity to support the patients. Trump's order, issued last Friday, temporarily bans travel for people from Iran, Iraq, Syria, Sudan, Somalia, Libya and Yemen and also temporarily halts the U.S. refugee program.

"Given that this is a critical time for these ill children, our ministry and Ontario's specialized children's hospitals, which provide best-in-the-world care feel the responsibility to act quickly," Hoskins said. "We have capacity in Ontario to provide highly specialized care that is not widely available in the world."