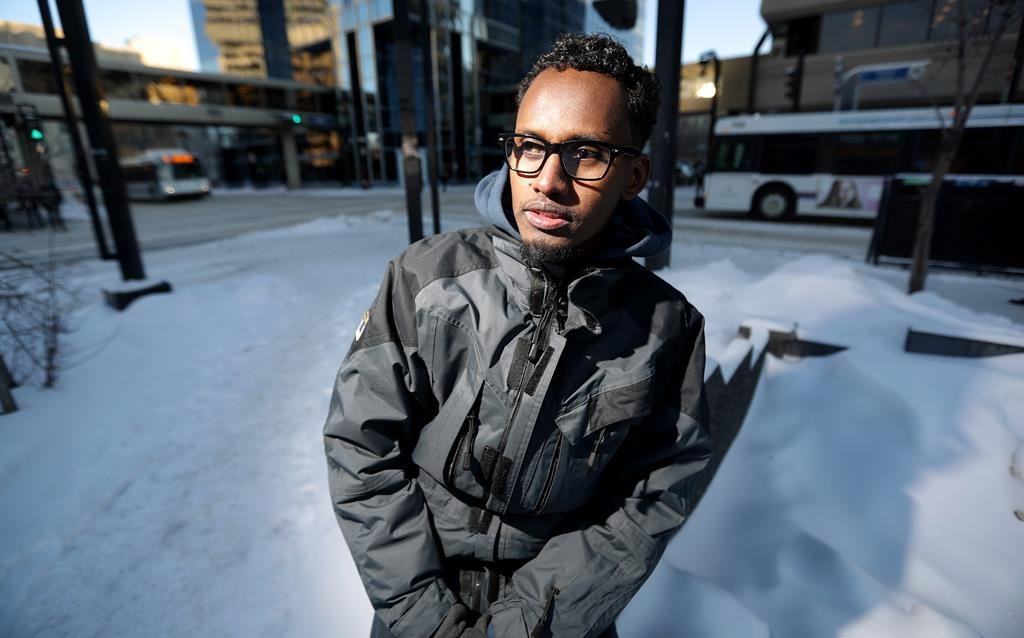 Yahya Samatar, a Somali border-crosser who was granted refugee status and now works in Winnipeg. Photo by the Canadian Press.
Previous story
Next story

An increasing number of people seeking asylum are braving the elements of the open prairie to come into Canada from the United States, says the head of one small community that is calling for federal help to deal with the influx.

Last weekend alone, 22 people crossed the border from North Dakota into Emerson-Franklin, RCMP confirmed Tuesday. Nineteen were put up in a community hall where they were supervised and fed by officials and volunteers in the community of 2,000 residents.

"It's starting to get overwhelmed here, and now we're starting to have concerns that we maybe need to have more security or do something different," said Greg Janzen, the municipality's reeve.

"We will be sending a bill to (the federal government) because there is a cost to our ratepayers."

The area has always seen the occasional border jumper due to the short walk from communities such as Pembina or Noyes in North Dakota to Emerson-Franklin, which sits right on the boundary. The numbers have increased in recent months and have shot up dramatically in the last couple of weeks following planned new restrictions in the United States on refugees.

Many of the border crossers are from African nations such as Somalia who have been living in the U.S, said Cliff Graydon, who represents the area in the Manitoba legislature. They have two choices at the border — go to an official entry point and be turned back under the Safe Third Country Agreement with the U.S., or sneak onto Canadian soil, get picked up by police and start the refugee process with the help of non-profit groups.

They used to come individually or in twos or threes, but are now coming in large groups after being driven to areas near the border.

"A number of the people that are refugees are coming from the Minneapolis area, for example. There's a large core of Somalis there," Graydon said.

Federal Public Safety Minister Ralph Goodale said Tuesday that border crossings in other parts of the country have also seen an increase, but the overall numbers are not as high as they were several years ago.

"The number has risen over the last three or four years, but compared to 10 years ago, the number is substantially down," Goodale said in Ottawa.

He said he would consider providing more resources to Emerson-Franklin and other areas, but was noncommittal.

Graydon said an aggravating factor is that the RCMP has cut some positions in the surrounding communities. The Mounties are responsible for patrolling the border outside of official entry points.

One of the highest-profile crossers was Yahya Samatar. Originally from Somalia and fearing persecution from a group affiliated with al-Qaida, he came to the United States and was denied refugee status. In the summer of 2015, he made his way from Minneapolis to the border area not far from Emerson-Franklin.

He got lost, saw the Red River and jumped in, hoping that Canada was on the other side. After getting out and walking for another 45 minutes or so, he came across a Good Samaritan who helped him.

"When a person is very desperate, you have to take any options that can save your life," Samatar recalled Tuesday. He has been allowed to stay in Canada and now works at an office in downtown Winnipeg.

Janzen said he is concerned that the flow of people coming across the border is going to increase even more once the weather warms up.

The terminology in this

The terminology in this article is misleading, "Unauthorized border crossers" and "border jumpers" are nonsense terms. It is ILLEGAL to cross Canada's border anywhere but at a manned border crossing, that makes them Illegals. The fact that these Illegal Migrants have been driven to the border, told how to game our pathetic system and what to say, shows Canada is being exploited by human traffickers. Residing in the US, means they are Not refugees, they are Economic Migrants. They should be arrested and sent back across the border immediately. If they want to come to Canada, they can apply from the US and get in line behind those not breaking the law. None of these people have been vetted and the fact that they won't risk a legal crossing means they know they have no right to be here and are hiding something. Since they've already broken the law and have no respect for the legal application process, they are off to a bad start. Now that they are on our soil, they get full benefits, medical, dental, mental health coverage better than many working taxpayers, for the duration. The entire legal process will be paid for by taxpayers, including the government funded groups that will help craft the narrative used to claim they are "refugees" despite having transited numerous countries and living/working in the US. If the claim fails, taxpayers also pay for the exhaustive and expensive appeals.

Fentanyl. Carfentanyl, weapons and anything else could be coming across these same crossings. Thank budget cuts for a few hundred funerals last year.

Many Canadians would like to help but perhaps if we could accept US refugees legally these people could go through legal channels. As it is, this is the only way. They could come prepared, now it is with what they can carry. Most have already been through this and do not need more trauma.

Breaking laws and paying criminals to get into Canada is a Choice, it is not "the only way". It is great that you want to help people, so why not start with people in need locally? There are homeless, disabled, elderly, Indigenous, and many other groups trying to survive and being entirely ignored. People say "we can help everyone", but the same governments giving away tens of billions to other countries refuse to increase disability or pension rates for people in crushing poverty. Our population increased by 1.7 million in 5 years and they plan to allow 300,000+ in this year, while slashing health care payments. They are setting the system up for failure and allowing more and more corporations to get involved. The court case in BC is just the start of multinationals attacking and unless changes are made, we are in big trouble.