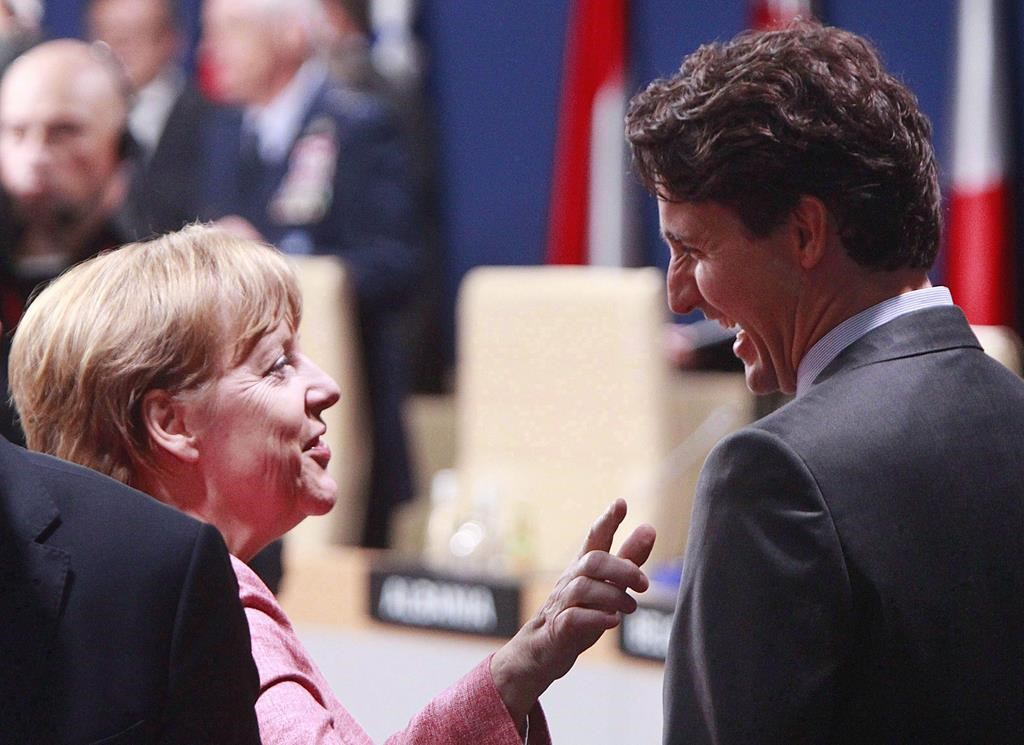 Next week's meeting between Prime Minister Justin Trudeau and German Chancellor Angela Merkel will be a symbolic affirmation of their shared values in the Donald Trump era, says Germany's envoy to Canada.

Trudeau's Berlin visit with Merkel, arguably Europe's most influential politician, comes as the EU tries to deal with the ascendance of Trump and his protectionist, inward looking "America First" foreign policy.

It's part of a four-day European tour that will also take Trudeau to Strasbourg, France to address the European Parliament, which is expected to vote to ratify the Canada-EU free trade deal next week.

Trudeau is expected to give a strong pro-free-trade address, but his meeting with Merkel could carry even greater weight.

"Now with the elections in the United States, it's fair to say we really want to work together both bilaterally, in the G7 and G20, and Canada has become an even more relevant partner," German Ambassador Werner Wnendt said in an interview.

Trudeau and Merkel will discuss "key foreign policy and commercial priorities" for Canada and Germany, Trudeau's office said in a statement.

Merkel and Trudeau spoke by telephone in December after a truck driven by a Tunisian asylum seeker rammed a Christmas celebration in Berlin killing 12.

Wnendt said Canada and Germany both need to co-operate with the United States on a variety of issues, including trade and their shared defence of Europe as part of the 28-country NATO alliance.

"Whether it's Ukraine or Syria or the fight against ISIS, it's fair to say our countries share a lot of positions," said Wnendt.

"We are convinced — as the chancellor has said publicly when she was referring to President Trump — yes, we want close co-operation, we want to strengthen our relationship, but this has to be on the basis of our common values."

Trudeau has discussed Trump with other European leaders recently. He has had phone calls in the last week with British Prime Minister Theresa May — the first foreign leader to visit Trump in Washington — and French President Francois Hollande.

Sources have told The Canadian Press that Trudeau's message to the foreign leaders has been that Canada is at the beginning of a four-year relationship with the new U.S. president and needs to engage him constructively because their economies are deeply intertwined and dependent.

"We do understand the importance of trade and investment and understand that the (Canadian) government is ready to discuss and negotiate things with the new president, including the NAFTA agreement," said Wnendt.

Canada is expected to ratify the deal after the European Parliament gives its OK.

The deal will still need the approval of the EU's 28 national parliaments as well as the some regional governments. But 90 per cent of the deal is expected to come into force under what is known as provisional application.

One such regional parliament, in Belgium's restive Wallonia, nearly scuttled the deal in October. A final round of negotiation saved the agreement from a Walloon veto that would have ended seven tough years of talks.

Raoul Delcorde, Belgium's ambassador to Canada, said CETA is "essential" and suggested its ratification would send a strong signal to growing anti-trade and protectionist forces around the world.

"We really look at Canada as a country that in many respects embodies the values we like, such as welcoming immigrants and refugees, in terms of getting involved in favour of free trade," he said in an interview.

"It's evident we are facing a situation where free trade is not as easy as it was before. You don't have to mention your neighbour in the south."

What promised to be a German

What promised to be a German-Canada agreement re the emphasis upon serious and sweeping reduction of emissions now seems to have disappeared from the agenda for the Merkel and Trudeau meetings of the next week. They don't even mention global warming in this article, only economic and trade policies. But now, with the Trump admin. being stirred into the CETA, TTIP, TPP broth the resulting stew-like wording for all of these so-called "trade" deals will probably be so vague in the area of ISDS corporate protectionism that our two-tongued PM Trudeau is poised to again sign away our democratic future to foreign corporations and open us up to having THEM be regulators of Canadian environmental policies Despicable politics when, for a few extra bucks, we doom our descendants to a future out of control! Where are you Wallonia? Please come to our aid again.