Trump promises Canada: No wall for you, only more 'bridges,' extra trade 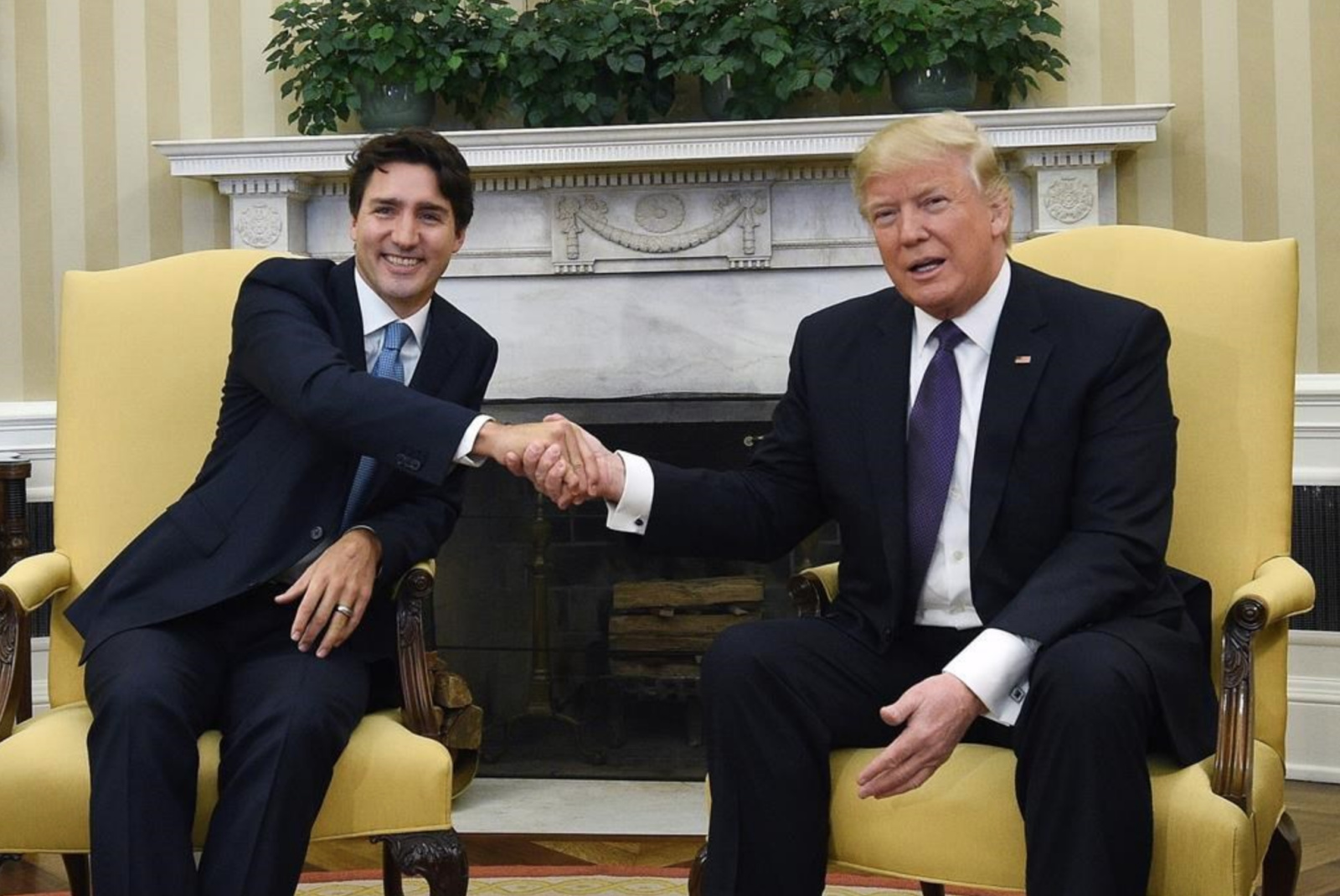 There was no talk of walls, only bridges as Donald Trump exuded amiability Monday in a first meeting with his Canadian counterpart that suggested the northern neighbour might be spared the brunt of his nationalist America−first platform.

The U.S. president shelved the type of trash−talking he directed at Mexico during his election campaign and spoke of building ties with Canada, including more trade, a faster−flowing border, joint work on infrastructure and more labour mobility.

And he spoke for the first time publicly about how Canada fits into changes he’s proposing for the North American Free Trade Agreement, which he campaigned against daily. Trump’s answer: Some lesser tweaks for Canada, which might benefit both countries.

Trump steadfastly avoided any hint of trouble with Prime Minister Justin Trudeau. Asked multiple times during a news conference about their decidedly different views on Muslim migration and Syrian refugees, he steered the conversation elsewhere.

The reassuring words could dispel some of the anxiety that has festered for months, as Trump delivered daily rants against trade deals while remaining conspicuously silent about one top U.S. trading partner: Canada.

The meeting culminated in a joint statement so normal, even by the historically placid standard of Canada−U.S. relations, that with some minor exceptions it could easily have been released by Barack Obama’s White House.

Monday’s statement jettisoned a pair of Obama priorities — climate change and refugees. Yet it emphasized numerous issues dear to Canada including customs preclearance to speed up the border; expanded labour mobility; and NATO co−operation in eastern Europe.

If anyone still doubted that Trump views the northern and southern neighbours differently, Trump drove home the point when asked, for the first time at a public event, whether he wants major changes from Canada in trade negotiations that could start as early as this spring.

Trump replied: "We have a very outstanding trade relationship with Canada... We’ll be tweaking it; we’ll be doing certain things that are going to benefit both of our countries. It’s a much less severe situation than what’s taken place on the southern border....

"On the southern (border), for many, many years, the transaction was not fair to the United States... our relationship with Canada is outstanding. And we’re going to work together to make it even better."

Asked about his differences with Trudeau on immigration, Trump replied that he wants goods moving faster across the border, with new customs technology. Asked whether their differences on refugees might require new security at the northern border, he referred to his southern−border strategy of accelerated deportations. Trump said that policy helped him win the election.

What was Trudeau doing in the meantime, as the president boasted about the size of his "very, very large" Electoral College triumph? Nothing. Not a muscle twitched on the poker face of the prime minister standing beside him.

They both papered over their well−documented differences. Trudeau acknowledged there will be a few, such as Trump’s freeze on Syrians and attempts to limit tourism from certain Muslim−majority countries.

Relationships between neighbours are complex, Trudeau said, and there will be disagreements, but he said the countries will successfully navigate those complexities and remain close friends.

Trudeau declined an invitation from a reporter to opine on those differences with Trump. The prime minister said, "The last thing Canadians expect is for me to come down and lecture another country on how they choose to govern themselves."

In fact, the Canadians sought to ensconce themselves on Trump’s good side by taking a well−trodden path to it: flattery. Canada’s diplomatic gifts to Trump included a picture of himself — standing next to Pierre Trudeau, when they spoke at the same event in 1981.

Trump said of the gift: "(Justin’s) father I knew, and respected greatly."

That exchange occurred at one of their four joint events at the White House: there was an Oval Office meeting, lunch, a news conference, and an encounter of a new Canada−U.S. business group for women, co−launched with Trump’s daughter Ivanka.

It was the first meeting of the Trump era in the old cabinet room. The president’s daughter was seated next to Trudeau at the table.

The idea for such a forum came from Trudeau’s entourage. PMO chief of staff Katie Telford pitched the idea during a meeting with Ivanka’s husband, Jared Kushner, a fellow real−estate heir and now White House staffer.

During the meeting, Trudeau spoke about the interdependence of North American supply chains, which includes car parts crossing the border more than a half−dozen times. One business leader told Trump about how private−public partnerships help build infrastructure in Canada; the president expressed interest in the idea as he plans for a $1 trillion infrastructure plan.

The joint statement with Canada appeared to offer a glimmer of hope on infrastructure priority — that the northern neighbour might be spared the Buy American restrictions limiting public projects to U.S. companies.

That issue is not totally within the White House’s control, and would likely be decided by Congress. But the joint statement said: "Given our shared focus on infrastructure investments, we will encourage opportunities for companies in both countries to create jobs through those investments."

The interactions between staff offered some vivid examples of the Odd Couple−quality to the new continental relationship.

Right behind them, chatting and laughing together, were two top strategists seen as intellectual powers behind the throne in their respective countries.

The progressive environmentalist Gerry Butts, Trudeau’s old university friend and now his principal adviser, was strolling beside his reverse−image Trumpian alter−ego — Steve Bannon, a driving force behind the president’s hardline immigration policies who believes the West is in a civilizational war against radical Islam.