Ineffective divestment campaigns should give way to direct corporate actions 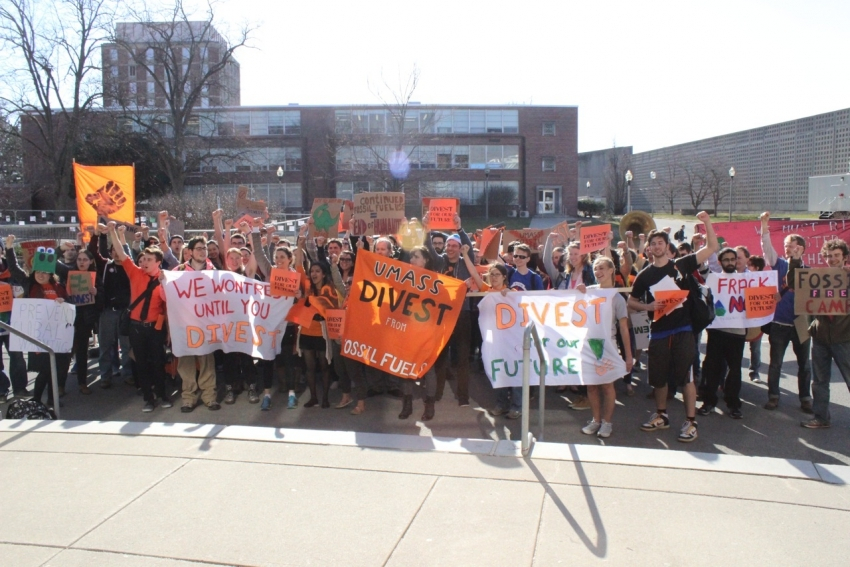 Students at Dalhousie University in Halifax are a determined lot. Campaigning against the burning of fossil fuels, they have occupied the office of school president Richard Florizone. They’ve also created a six-foot-high dinosaur to signify that investing in pollution-causing industries is a skeleton in the university’s closet.

Divest Dal is one of at least 34 academic-based campaigns across the country pressuring administrations to divest holdings in fossil fuels on ethical grounds.

However, the Dal effort suffered a setback when the Dal administration announced it would not sell off an estimated $20.5-million in fossil fuel holdings.

“We did not accept the Board’s no vote,” says Laura Cutmore, a Divest Dal organizer, in an email. “We will continue to campaign towards divestment for as long as it takes.”

Divest Dal works with the support of 350.org , by far the largest group in the world involved in campaigning, and they have a lot of faith in 350.org’s leadership.

350.org, which operates gofossilfree announced with considerable fanfare that the campaign urging institutions, mostly universities, churches, and pension funds to divest their endowment holdings in fossil fuels is working well.

Canadian 350.org organizer Cam Fenton wrote in an email: “In a matter of years it has grown from a student led campaign on a few campuses to something that is impacting some of the largest political and financial institutions on the planet.”

The 350.org website claims that “our movement is strong and the fossil fuel industry is fighting for its life.”

Whoa! Not so fast.

While 350.org runs a number of important campaigns, such as “Resist Trump’s Climate Agenda," there are serious questions about whether divestment campaigning is effective or whether it should be replaced by direct action campaigning.

To begin with, the movement misleads the public about how much divestment has occurred. 350.org’s website says that 688 institutions who represent more than $5-trillion dollars of assets have committed to divest! That’s correct. But groups – including Dal and 350.org itself – erroneously claim that the divestment amount itself is $5-trillion.

350.org does not know how much money in fossil fuels institutions have divested. Many institutions are so secretive about their overall holdings, it’s impossible to say what the true divestment total might be.

In September 2015, Mother Jones magazine investigated the claims of the divestment movement. At that time, 350.org wrote a news release with the headline “Fossil fuel divestment pledges surpass $2.6-trillion,” when that figure actually represented the total assets of organizations planning to divest.

Ellen Dorsey, director of the Wallace Global Fund, told the magazine that the best she could do would be to estimate the true percentage of fossil fuel holdings of institutions based on holdings on the S&P 500. The average is from three to seven per cent, meaning that the $2.6-trillion claim was probably much closer to $182-billion, a pretty small amount.

I was unable to find any attempts by 350.org to correct itself or other groups when the divestment total was grossly inaccurate. It seems to me they prefer people to be bamboozled by the huge trillions number.

To its credit, the divestment campaign has been successful in raising awareness about the damage fossil fuels do to the climate.

“We have changed the conversation about climate change on campus,” writes Cutmore from Divest Dal. “We have raised awareness and made divestment the most popular and long-lasting activism campaign in recent memory.”

But the campaign has been much less successful in getting institutions to divest.

Overall, after years of campaigning, there has not been a lot of succcess. Of the thousands of universities, colleges, and pension funds in the three main countries targeted, only 688 institutions have divested.

So why aren’t more institutions divesting their fossil fuel holdings?

Practically every institution is sympathetic to the cause, but some, like the Canada Pension Plan Investment Board, prefer to keep their shares and try to convince the companies themselves to change.

In addition, when Boards examine the implications of moving around large amounts of money they quickly realize that fees can run into the millions of dollars.

Many institutions discover that divestment does not accomplish very much. Christianna Wood, a Vassar College, N.Y. trustee has had more than 30 years of experience in dealing with one divestment after another – including those related to South Africa, tobacco, and those that create weapons of mass destruction.

“The problem I have found in every instance, without exception, is that trying to use an investment portfolio to accomplish social or political causes comes up short in every way you can imagine,” Wood has said.

Divestment doesn’t hurt fossil fuel companies. “By petulantly selling your shares, you have not hurt the company at all. You’ve just transferred ownership of shares to some other party who cares much less about the issue than you do,” she says.

The fact that divestment activities raise awareness is not enough. The campaigning carried out by tens-of-thousands of volunteers creates the impression that something important is happening, when very little is being accomplished.

A different strategy is needed.

First, we need to realize that protesting against governments has only limited success. As we see in Canada, the federal government clearly believes that, in order to boost the economy and create jobs, developing fossil fuel resources is much more important to them than seriously fighting climate change.

So we need to go to the heart of the problem. We must directly oppose the corporations that contribute to the deaths of some 5.5-million people globally annually.

Yes, the corporations are big and powerful, but if they are taken on one at a time, their businesses can be disrupted. A campaign could begin by targeting a vulnerable corporation, probably a coal company.

Every possible tactic should be used, from sit-ins, to protests, and boycotts of different kinds of fossil fuel company products, awards mocking corporate executives, and guerrilla theatre.

Unlike the divestment campaign, which utilizes thousands of volunteers and has little to show for it, a few hundred determined people could carry out a campaign against fossil fuel corporations.

Here's an economic way you can stop oil expansion

Opinion: Why are Canada's environmental groups going along with weak climate targets?

Divestment has to go together

Divestment has to go together with boycott, otherwise, as was suggested, you are just passing on the shares of a company on to someone else who may not care as much. Getting the tens of thousands of students and facualty to boycott a business, even one as large as Exxon, has overall ramifications that extend far beyong the university or college, where others can take up the cause.

When an enemy capable of

When an enemy capable of destroying the world is left untouched it will destroy the world. When it is combatted BY EVERY MEANS POSSIBLE then the more weapons you bring to the battle the more likely you will win the battle in the shortest time. The recruitment to that battle is, firstly, through the hearts and minds of people. Use every weapon at your disposal in winning those hearts and minds.