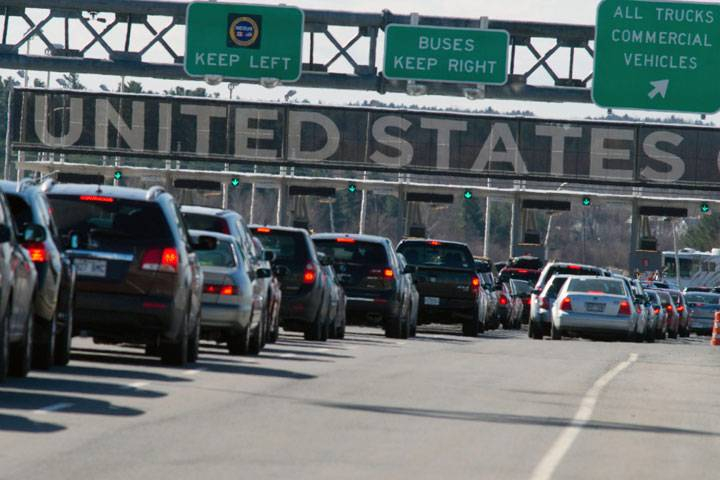 Schools across Canada are grappling with the uncertainty of U.S. travel restrictions and how that affects upcoming student trips across the border. File photo by The Canadian Press
Previous story

Schools across Canada are grappling with the uncertainty of U.S. travel restrictions and how that affects upcoming student trips across the border.

A travel ban instituted by President Donald Trump on citizens from seven Muslim-majority countries and Syrian refugees may be on hold as it works its way through the U.S. justice system, but Canadian schools remain concerned with how foreign-born students will be treated at the border.

Jim Cambridge, superintendent of the Sooke School District in British Columbia, said there are a number of trips planned for sports, music and educational purposes in the coming months that are being reconsidered.

While the refugee population among students in the Vancouver Island district is small, Cambridge said the board must make a decision based on safety and also ethical considerations.

"The board is concerned some students may be stopped at the border, and if that's the case, they want to examine whether or not they'll support any trips to the States right now," he said.

The B.C. School Trustees Association is advising them on what student groups can expect at the border based on information from both U.S. and Canadian border agencies, he said.

One of the board's concerns is fairness to students who may not be allowed to cross the border, he said.

Even if specific trips may not involve students affected by the ban, Cambridge said the board will have to decide whether to take a stance on the ban anyway, recognizing there are students within the district who are being discriminated against due to new U.S. travel policies.

"That's what the board needs to wrestle with is the more ethical decision about whether some trips can go and some can't or whether they all can't or can," he said.

The board meets Tuesday to discuss the issue, and Cambridge said some schools have begun looking at Canadian cities as a "Plan B" in the event trips are cancelled.

Sooke trustees have looked to neighbouring school boards and other areas of the country to help inform their decision.

The Greater Essex County School Board in southwestern Ontario decided earlier this month to cancel a handful of trips over concerns of safety and equity.

The Ottawa-Carleton District School Board sent a letter to parents to confirm whether their children will participate in upcoming trips across the border to determine whether plans should go ahead.

Students in the Pembina Trails School Division in Winnipeg participate in many international trips, but superintendent Ted Fransen said a recent decision to cancel one, although rushed, was made easily.

The track team at Acadia Junior High School was required to submit a deposit on Jan. 30 to participate in a competition in Minnesota, days after Trump signed his executive order.

Unsure about how policy would affect students on the team, they chose to opt out of the race.

Since the ban has been blocked by the U.S. courts, Fransen said two other trips to the States have since gone ahead.

Trump has vowed to bring in a new travel ban order to replace the one that the American courts have suspended pending a legal challenge by Washington State and Minnesota. It's not clear when the new order would be issued.

The Pembina Trails school board isn't considering new rules around travel in light of the situation in the U.S., even if another ban is implemented.

Fransen said he knows principals, teachers and students within his diverse district all value inclusivity, and a board-wide rule isn't necessary.

"I just can't imagine that we would get a request from a school principal to approve a trip to the U.S. where students in the group wouldn't be allowed to go," he said. "That would be counter to our culture."