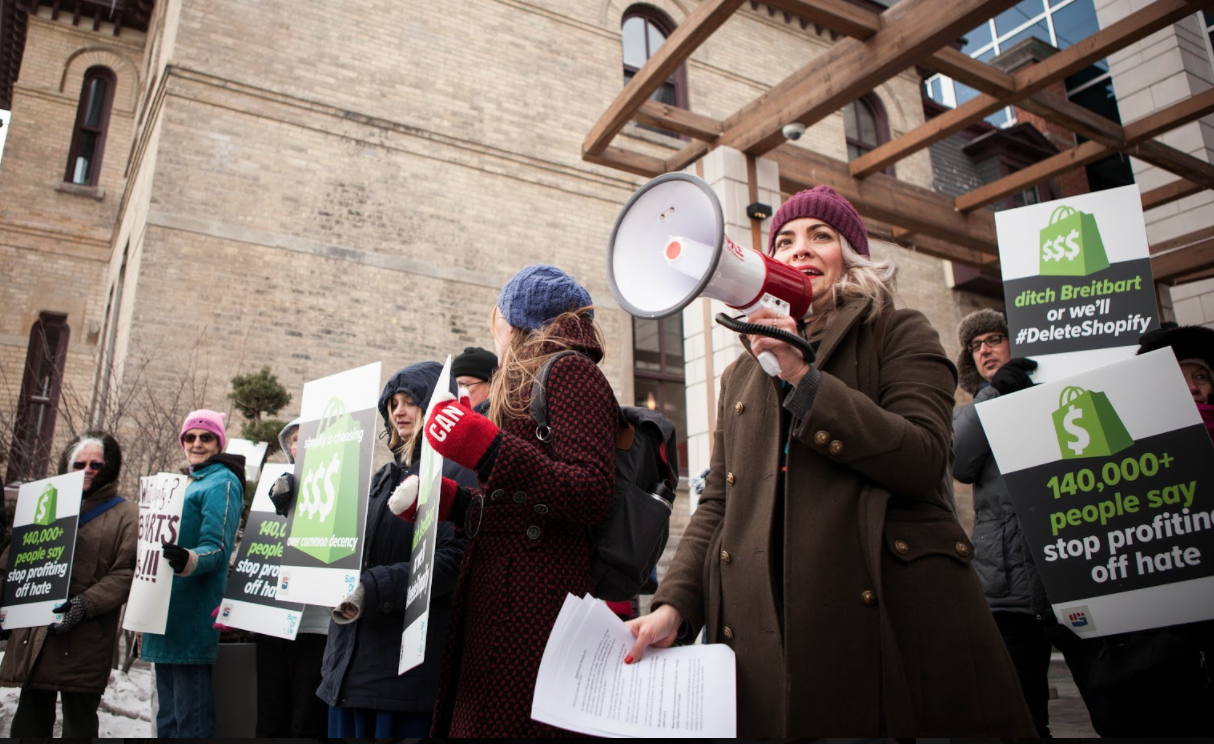 Roughly two dozen protesters gathered outside Shopify's headquarters in Ottawa on Thursday, demanding the online commerce company develop a policy against hate speech and shut down its store for the American media outlet, Breitbart News.

Armed with an open letter signed by nearly 2,000 Shopify customers, they accused the Canadian tech sensation of "profiting from hate speech" by selling the wares of Breitbart, a right-wing news site with deep ties to the administration of President Donald Trump.

Some of Breitbart's products include t-shirts that tell foreigners to “get in line,” support Trump's proposed U.S.-Mexico border, and label the wearers as “border patrol.” The outlet was once chaired by Steve Bannon, who now serves as chief strategist for the White House.

In an emailed statement to National Observer, Shopify declined to comment on the protest's accusations or demands, but clarified that use of its online platform is not an endorsement of Breitbart News. The company's website says it supports "free speech" and will allow a merchant to use its platform, provided its products are legal in the jurisdiction where it operates.

"Shopify supports the rights of citizens to engage in free speech and peaceful protest," Samantha Tam, a member of Shopify's press team, told National Observer. "Shopify is a platform that provides software to help businesses sell their products....Shopify does not endorse, fund or advertise with Breitbart."

Protesters were not permitted to enter the Shopify building on Thursday afternoon, but two individuals who did not reveal their names accepted a box containing letter signed by nearly 2,000 Shopify customers asking the company to cut its ties to Breitbart. In 2016, SumofUs, a global corporate watchdog organization, started an online petition asking Shopify to shut down its store for Breitbart — a business relationship it equated with "endorsing hate."

That petition has since been signed by more than 196,000 people, and a number of corporate giants, including Kelloggs, BMW, Visa, T-Mobile, and Nordstrom, have all refused to do business with the news site. A copy of that petition was included in the box, and SumofUs lead campaigner Emma Pullman said its signatories include Shopify shareholders, customers, and employees.

"(Shopify) is directly profiting off of Breitbart's messaging and that is a message that denigrates women, trans people, people of colour, refugees, immigrants, survivors, and so many others," she told the crowd on Thursday. "We know that Shopify customers want to see Shopify do the right thing and stop doing business with Breitbart."

"I'm horrified at the response I received from Shopify when I contacted them. To say that this is 'freedom of speech' is crazy," Paving told National Observer. "This is a wonderful, diverse community. We don't need this kind of nonsense on the streets."​

Shopify says it would be "delighted" if Breitbart left