A terminus in the new underground railroad 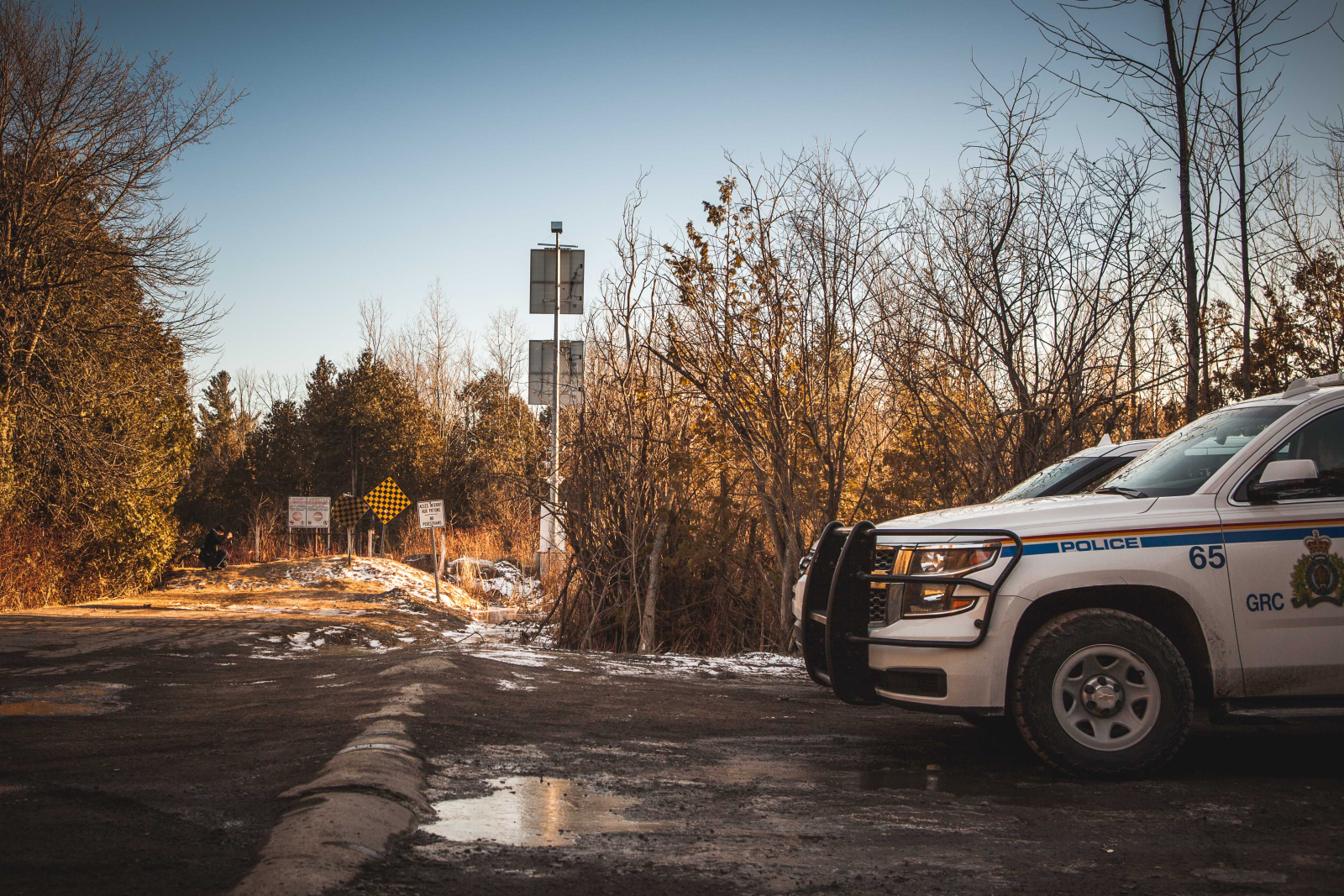 This is the road from an unofficial crossing place near Hemingford, Quebec where RCMP await asylum seekers walking into Canada from the United States. Photo by Alex Tétreault
Previous story
Next story

This article was originally published by The Tyee and is by their Ottawa reader-supported correspondent.

Residents of a small town in southern Quebec gathered Sunday to try and make sense of their hot spot status in Donald Trump’s new world order.

Hemmingford, Quebec is one of the few places in Canada on the front lines of an influx of asylum seekers coming from the United States.

Representatives for police, the United Nations High Commission for Refugees and a group that helps refugees in nearby Montreal sat in front of a crowd in a packed gym at an event organized by a local United Church.

The town is near an increasingly popular place for refugee-status seekers to enter Canada without using a designated crossing. Doing so is illegal under the Customs Act. But if they were to cross into Canada at a legal crossing, they would be sent back under the Safe Third Country Agreement, which requires individuals to claim refugee status in the first safe country they enter.

Some who arrive at Hemmingford are reported to have wanted to live in the U.S. but were denied status there. Others intended to end up in Canada, but entered the United States first because it was easier to get a visa.

In Hemmingford last month, a photo was taken of a Mountie smiling as he held up a young child who had just entered Canada with her family. Around the same time, other photos showed handcuffed refugees detained by Canadian police. Some are calling Hemmingford, population 808, a terminus in a new underground railroad.

As their home becomes known as a back door into Canada, Hemmingford residents Sunday displayed a relaxed attitude toward the situation, and many were at the meeting hoping to find out how they can help.

Happy to have them

Helene Gravel lives at the end of one of the first driveways that people pass after they cross the rusty gate and ditch near a white marker signifying the international boundary between Canada and the U.S..

The crossing sits at Saint-Bernard-de-Lacolle, about 10 kilometres from Hemmingford, where Roxham Road crosses into the U.S. near Champlain, N.Y..

There’s no Statue of Liberty here, not even a plaque, just trees and members of the Royal Canadian Mounted Police sitting in their vehicles waiting to arrest those crossing for breaching the Customs Act.

Gravel said it’s nothing new to see people crossing – she’s watched it happen for 20 years – but never like this.

“There were only a few people every year, but now it’s a lot every day,” she said.

Recently the Canadian government told journalists about 2,500 people crossed into Canada via Quebec, Manitoba and B.C. illegally in 2016, and since the beginning of this year alone there have been about 430 in those regions combined.

Almost 300 of those were in Quebec - an increase of 230 per cent over last January.

It used to be mostly young, single men who would cross, Gravel said. If they happened to see her they would ask if they had arrived in Canada. Now, she said, it’s families she sees being picked up by police and driven past her property.

She reckons many of them are leaving the United States in fear as the Trump administration targets immigrants and refugees for the nation’s woes.

Trump invited relatives of people killed by undocumented immigrants as guests at his address to Congress last week and launched a website listing “victims of immigrant crime,” despite research showing immigrants commit crimes at lower rates than native-born citizens.

On Monday, Trump announced tweaks to his travel ban on citizens of several Muslim-majority countries after it was rejected by a judge last month. He is ordering a temporary suspension of U.S. refugee intake as well.

Gravel isn’t afraid of living meters from where people seeking refuge come into the country. In fact she’s tired of journalists knocking on her door asking her if she’s scared of them.

It is a bit too busy now though, Gravel said, stressing she’s happy to have refugees come to Canada. She’s already lost one neighbour who no longer comes to his vacation property because the idling police vehicles and crossing refugees have become too much of an intrusion.

“It’s just a quiet place, we are not used to so many people,” she said, explaining she hopes Canada doesn’t establish any permanent processing centre at the crossing. “I live there because it’s quiet.”

It is indeed quiet.

Driving into Hemmingford is like entering a village arranged by a devoted collector of Lilliput Lane housing figurines.

Tall – but not too tall – hardwood trees hug the gutters along the road, giving way to gently sloped grass fields and carefully manicured properties.

A public outdoor skating rink slowly succumbs to the unseasonably warm March temperatures on the cusp of town. Residents stop reluctantly at the town’s lone blinking stoplight at its busiest intersection.

This is rural Quebec: a place for cows, apple cider and comfortable fashions. It’s not supposed to be a place where frightened refugees trudge their children across snow in biting cold fleeing a country threatening to send them back to places filled with violence and poverty.

Now Hemmingford has become connected to the world’s troubles as millions of people from places like Somalia and Syria roam outside their countries looking for help.

At Sunday’s meeting, experts explained why people are coming to Canada, more specifically, why they are coming to this tiny nook of the world.

It’s a matter of geography, RCMP Const. Marcel Pelletier told the crowd. Pelletier said it’s an easy place to cross, but most people using it are bound for places like Toronto, which is obstructed by the Great Lakes.

So, they make their way to Roxham Road instead, he said.

There is concern more people could make the trip as the weather warms and how Canada would handle a major influx, and what it would do with the people arrested after crossing.

Canada does hold some refugees, even refugee children, in detention centres, a practice Amnesty International has asked the federal government to end.

Talk at the meeting indicates the 150 people who live along the road and in the area were more concerned about helping than keeping them out of the country or locking them up.

One asks Pelletier if it’s legal for her to feed or shelter people who have crossed illegally. He replies that he’d rather she calls the police first.

Others are there to help in a joint letter writing exercise to Canada’s Immigration Minister Ahmed Hussen, asking him to rescind the designation of the United States as a safe third country.

That would mean refugees could ask for protection at a legal border crossing.

Among the audience on Sunday, knitting a scarf in the third row as she listens, is Jeanine Floyd, who immigrated to Canada herself from the United Kingdom years ago.

She remembers when crossing into the U.S. at the end of Roxham was child’s play for local kids.

“They would go down to the end of the road on their bicycles and they would dare each other to cross,” Floyd said. “This was the most exciting thing that would happen on Roxham, actually crossing the border to America.”

Now the border marker represents something other than fun and games as residents in the area worry about the suffering of those making the journey to the Canadian border.

They want to offer more than meaningless gestures to these people, Floyd says, suggesting that’s why people came together in Hemmingford Sunday.

“I think it’s just that pressure of wanting to fix it,” she says. Her tone goes dour. “We can’t fix it.”