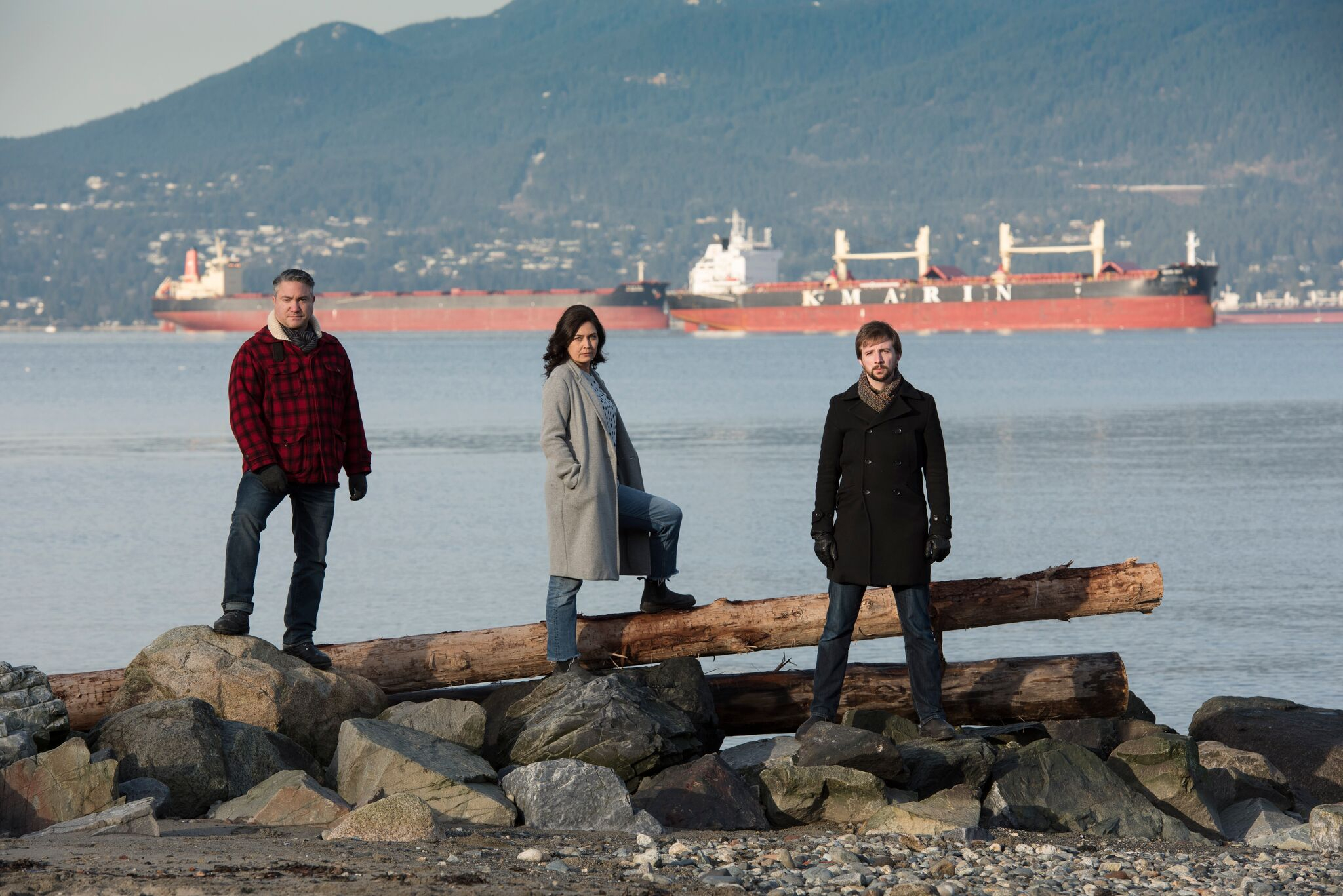 Vancouver Observer Sustainability Reporter Carrie Saxifrage jumped on a bus in 2012 and rode for 24 hours to Northern British Columbia. She was up north during one of the coldest periods in recent years to gather testimonies from remote communities like Burns Lake, Terrace, Prince Rupert and Smithers along the then-proposed Enbridge Northern Gateway pipeline.

Saxifrage spent three weeks meeting with residents and hearing their concerns. In the Bulkley Valley, she parked next to the Morice Falls and listened as a member of the Wet’suwet’en First Nation described how they’d caught salmon at that exact spot for the last several thousand years.

The woman turned to Saxifrage and told her a pipeline spill would ruin the spawning grounds of the fish. “I can’t fathom a world without salmon,” she said.

Her story — and many others — found their way into the book, Extract: The Pipeline Wars. The book is a detailed and hard-hitting look at pipeline politics and the Northern Gateway project that resulted from Saxifrage’s reporting for Vancouver Observer, along with that of her colleagues: Alexis Stoymenoff, Jenny Uechi and David Ball.

“It would have been impossible for the stories to have the emotional depth they did without someone physically there to talk to people about their land and how they felt about the project,” Uechi noted on Monday.

Now, the book is moving from the printed page to the bright lights of the stage. Extract is the inspiration for a theatre production titled The Pipeline Project. The play opens March 9 at Richmond's Gateway Theatre.

Between 2010 and 2012, Vancouver Observer writers and editors reported comprehensively on the controversial Northern Gateway project. Vancouver Observer continued to report on the project until it was rejected by the Trudeau government in 2016.

As Saxifrage covered the National Energy Board hearings in remote B.C. communities through the dead of winter, she recorded hours of testimony from First Nations communities about their stories, histories, and reasons for opposing the pipeline.

Author, activist and 350.org co-founder Bill McKibben reviewed the Extract, calling it “one of the greatest stories underway on the planet — the effort to wrest vast quantities of the dirtiest energy on earth from beneath Canada's boreal forests, and the even greater and far more beautiful effort to stop them.”

McKibben wrote, “Extract does a great job of giving voice to some of the people on the front lines and giving you the information you need to engage in the debate."

That same spirit infuses The Pipeline Project, according to the play’s director, Chelsea Haberlin.

Haberlin hopes the play will provoke the kind of debate that creates change. “I think that’s the way you actually start to change hearts and minds — through face-to-face communication with other human beings.”

The actors reading excerpts from The Pipeline Project. Video from YouTube

The one-hour play explores such current events as climate change and First Nations land claims through the perspective of three actors who embark on a journey of self-reflection.

After intermission, each night will feature a different speaker who will offer a few thoughts and then engage in conversation with the audience. Speakers include Linda Solomon Wood, the founder and editor-in-chief of National Observer; Sven Biggs, an organizer with Stand.Earth; and Max Fawcett, a former editor of Alberta Oil magazine.

“I thought this play isn’t going to do much unless it gives the audience a chance to be part of the conversation in a literal way,” Haberlin said.

At the end of each night the featured speaker will challenge the audience to come up with one thing they might do in the next two weeks to create change.

“They leave feeling like there’s something we can all do,” Haberlin said.

Reporting on the pipeline project was anything but straightforward. Uechi noted that the Harper government of the time made it difficult for people to criticize oil sands pipelines. The environment minister, Peter Kent, openly criticized reporter Mike De Souza’s work. De Souza was working for Postmedia, but is now National Observer’s managing editor.

“We broke the news about the National Energy Board working with the RCMP and CSIS to monitor pipeline critics. It was not an easy time for anybody reporting on this project,” Uechi said.

The news industry as a whole was struggling financially, with a lot of pressure on journalists to write stories that would generate clicks. Uechi said that it was not an easy choice for National Observer’s founder and editor-in-chief, Linda Solomon Wood, to double down on coverage of pipelines and energy issues.

“But as with our Irving series, there were a lot of readers who wanted to know more.”

The pipeline issue itself was also complex. The book and Vancouver Observers' reporters recognized that people depend on oil for transport, for manufacturing, and, as Uechi puts it: “for all the things we don’t even think about in our daily lives.

“We are completely dependent on oil, even if oil alone is not the only energy source in the world that can fulfill our energy needs. And yet, we are also undeniably dealing with the reality of climate change, with the reality of how an oil spill in one of the world's largest remaining temperate rainforests would devastate communities, and the fact that there was no study on how a bitumen spill could be cleaned up in an area so remote.”

For Uechi the most striking example of the issue’s complexity came from the NEB testimony of Lee Brain, a young Prince Rupert resident who went on to become the mayor of the northern B.C. city.

As the son of an oil executive and having worked in an oil company himself, he understood the industry. At the same time his knowledge of the industry gave him insight into what a major oil pipeline and tanker traffic would do to his community. After weighing both sides of the issue, he spoke out against the pipeline in 2012.

“It's not a black and white issue for most people, I think, but as with many topics, people come to different conclusions depending on what's most viscerally important to them,” Uechi said.

“The climate and environment may not be as important compared to the prospect of more jobs and economic prosperity for some, while the risk to wild salmon alone would be reason to give a categorical 'no' to the project for others, no matter what the rewards.”

Prime Minister Justin Trudeau rejected the Northern Gateway pipeline in November 2016. If approved, that project would have cut through the globally important Great Bear Rainforest.

A Federal Court of Appeal decision earlier in 2016 declared the permits issued by the former Harper government invalid, because of inadequate consultation with First Nations. That decision
helped set in place the subsequent rejection of the project.

John Cooper, the play’s associate director, first introduced Haberlin to the book, Extract. Cooper praised the book as "a comprehensive overview" of what is taking place in British Columbia and Canada when it comes to resource extraction, according to Haberlin.

Haberlin estimates that about a third of the play is verbatim from the book. She described Extract’s reporting as “really fantastic,” but noted that reporting and journalism aren’t necessarily theatre.

It took the members of the theatre company, ITSAZOO, three years to tease out the story. The group would come together to write and talk, working to create the script.

Originally, six people attempted to collaborate on the script, but Haberlin said that became unwieldy. Ultimately, the play’s three actors — Sebastien Archibald, Kevin Loring, and Quelemia Sparrow — wrote the play. The work is a co-production with the First Nations performance company, Savage Society.

Haberlin said the play uses the Northern Gateway pipeline project as a focal point and then expands outward from there. “What they talked about in the book is relevant for Kinder Morgan, for liquefied natural gas, even for mining or hydro.

“It’s just the basic question of what we are going to do with this land. How are we meant to live in a way that’s respectful of history and people?”

“No matter what side you fall on politically, you understand what we’re talking about is human lives and the history of this country."

Added Uechi: “We're really proud that this reporting has inspired artists and we're looking forward to seeing The Pipeline Project.”

I really like what you guys tend to be up too. This sort of
clever work and exposure! Keep up the superb works
guys I've incorporated you guys to blogroll. fotbollströjor