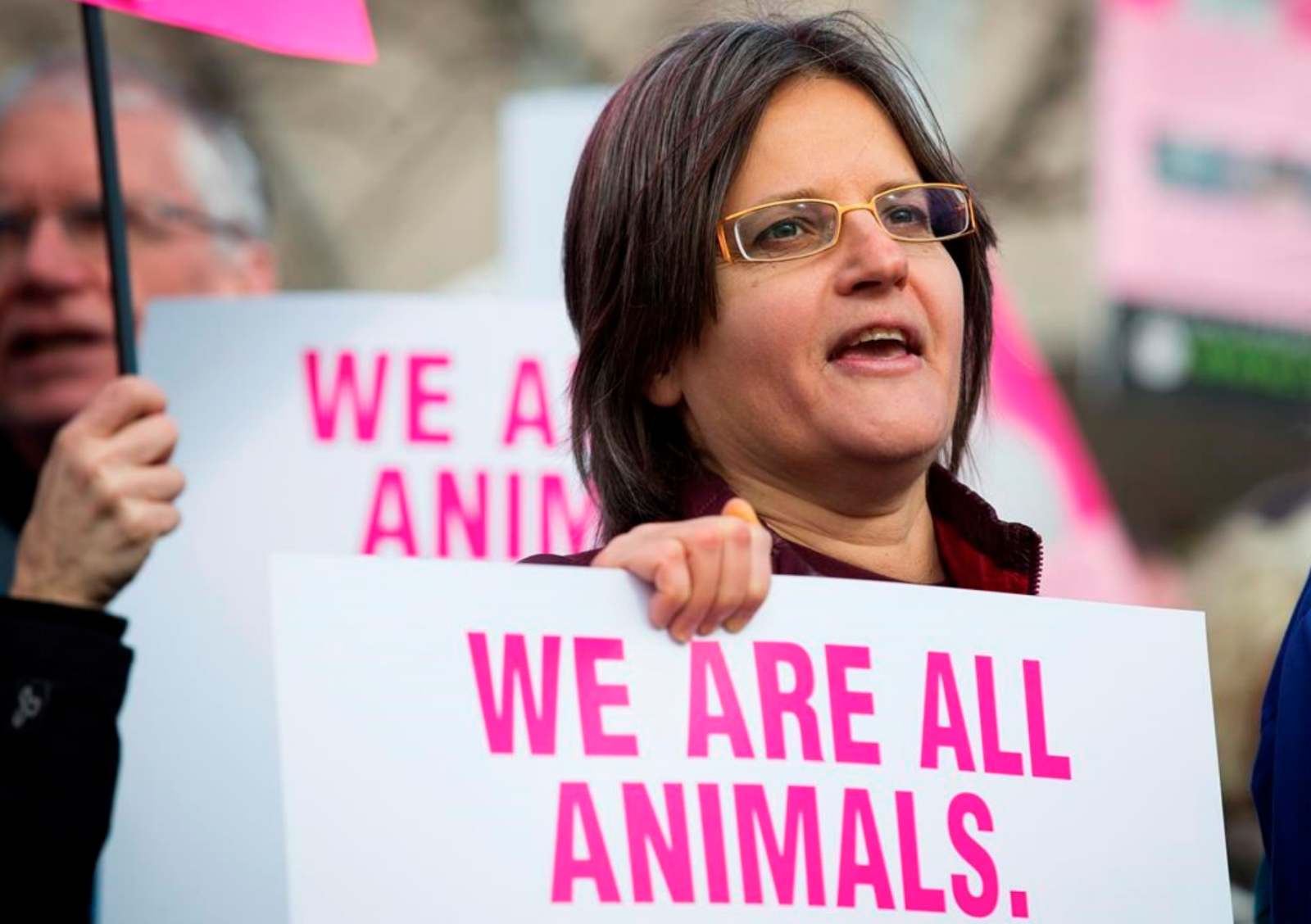 Activist Anita Krajnc of Toronto Pig Save demonstrates outside of a Burlington, Ont. courthouse ahead of closing arguments in her case, Thurs. March 9, 2017. Photo by The Canadian Press
Previous story

A Toronto woman who gave water to pigs on a truck headed to slaughter committed an act of kindness similar to when people gave water to Jews transported on cattle trains during the Holocaust, her lawyer said in closing arguments at her trial Thursday.

Defence lawyer Gary Grill also compared Anita Krajnc’s actions — and the resulting legal battle — to the experiences of historic rights activists such as Gandhi, Nelson Mandela and Susan B. Anthony.

"Anita is acting in the public good," Grill told a packed courtroom in Burlington, Ont.

Though pigs are not recognized as persons under law, they have the same capacity to suffer as humans, Grill argued.

"It is clear that the public has an interest in fostering the good actions of others," he said.

Krajnc, an activist with the group Toronto Pig Save, has pleaded not guilty to a mischief charge in the incident, although she has admitted that she gave water to the pigs. Speaking after the hearing, the 49−year−old said she was moved by the comparisons to such noteworthy figures.

"This is the fight of my life. I’m going to spend the rest of my life fighting for the rights of animals until they’re considered equal just like the rest of us," she said. "There are people hundreds of years ago, like Susan B. Anthony (who) went to jail fighting for women’s rights. She devoted her life to that and now there are people amongst us who are devoting our lives to saving animals and the planet."

The Crown has argued that the pigs were the property of a farmer, and Krajnc was interfering with his property when she gave them water, even if the pigs weren’t hurt in any way. Prosecutor Harutyun Apel said that in the view of the farmer and the truck driver, the pigs were given an "unknown substance" which could have prevented them from being slaughtered.

"Why does the farmer have to take the chance or the risk that it may not be water?" he said.

But Justice David Harris said there was no evidence that the liquid was anything but water, and asked repeatedly whether it counted as interfering if there was no harm to the pigs, which were still taken to slaughter.

"The alleged offence is not upsetting the driver or the owner," or creating uncertainty in their minds, he said.

Krajnc’s lawyers argued their client had caused no harm to the pigs and therefore committed no crime.

"Her intention all along was the avoidance of harm," which should trump the owner’s right not to have his property touched, Grill said.

Court has heard that on June 22, 2015, Krajnc was dumping liquid from a water bottle into a truck carrying pigs as the vehicle approached the Fearmans Pork slaughterhouse. Krajnc previously testified that she was treating the pigs as she would want to be treated.

Meanwhile, the pigs’ owner, farmer Eric Van Boekel, has testified that he complained to police because he was worried there were contaminants in the water. He said that could lead the Fearmans Pork slaughterhouse to turn his hogs away.

Van Boekel also said he was worried about the animal activists, particularly that one would get hurt while reaching into the truck.

The closing arguments in Krajnc’s case drew a number of her supporters to court on Thursday. The courtroom was so full that some sat on the floor during the proceedings while reporters squeezed into the prisoner’s box.

Krajnc’s supporters also rallied outside the courthouse before and after the hearing, some hoisting signs with various slogans promoting animal rights. A group of protesters was also seen outside the Fearmans slaughterhouse on Thursday morning. Krajnc, who is set to be sentenced on May 4, said outside court she is "perfectly fine" with facing jail time or a fine if convicted.

By Sam Robertson in Opinion, Culture | November 30th 2016
State Of The Animal

By Charles Mandel in News, Politics | February 29th 2016
State Of The Animal