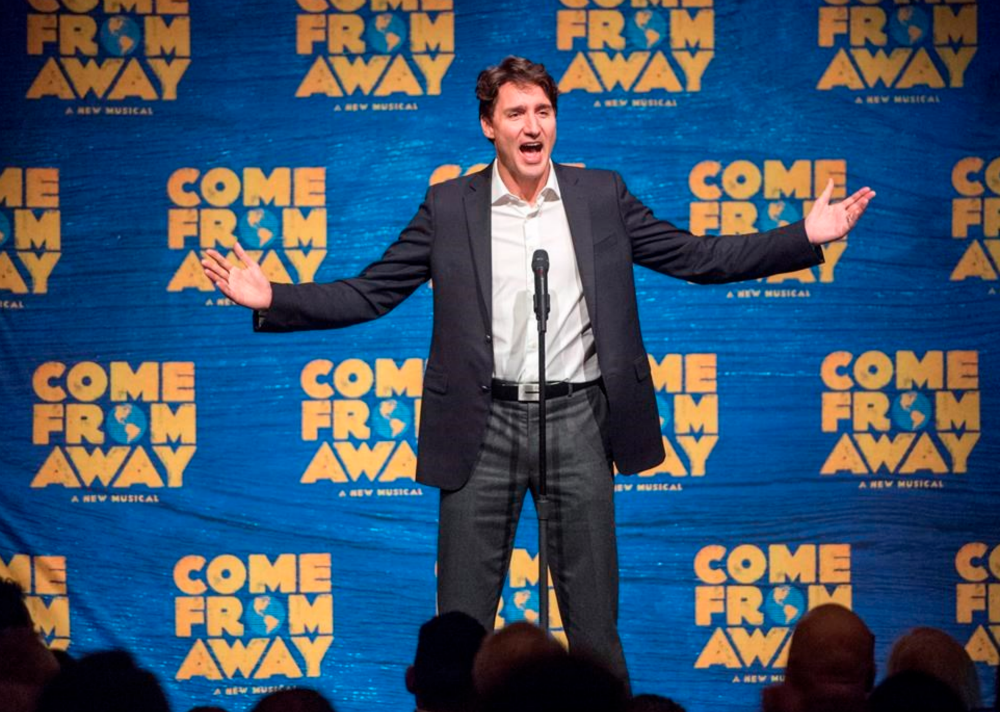 Prime Minister Justin Trudeau attends a showing of Come From Away, a musical about Canadians helping stranded American travellers after the 9/11 terrorist attacks, in New York City on Wed. March 15, 2017. Photo by The Canadian Press
Previous story

They laughed, they cried, they hugged. It was a night to remember on Broadway for hundreds of theatre−goers including Prime Minister Justin Trudeau.

A bevy of political power−players attended a play about Canadians helping stranded American travellers in the aftermath of the 9/11 terrorist attacks.

The attendees included U.S. President Donald Trump’s daughter Ivanka, who arrived in the same motorcade as Trudeau and his wife Sophie; cabinet members; and scores of foreign countries’ ambassadors to the United Nations.

Afterward the prime minister shared emotional hugs with the people whose stories inspired the play, "Come From Away." Someone asked whether Trudeau had shed a tear and he replied that there’d been more than just one.

"Oh my god, I lost the fight the whole way through," Trudeau said. "Two minutes (in), I started to cry."

He then hugged American pilot Beverley Bass who is featured in the play. She told him she’d seen it 58 times.

Created by husband−and−wife team Irene Sankoff and David Hein, "Come From Away" is set in the remote East Coast town of Gander, N.L., in the aftermath of the Sept. 11, 2001 attacks. The town saw its population double in size after local residents sheltered 6,579 passengers and crew from 38 planes diverted when U.S. air space was closed following the tragedy.

The play had its official Broadway opening on Sunday, which was followed by widespread critical raves from publications including The New York Times, The Washington Post and Chicago Tribune.

The play offers the proverbial emotional roller−coaster that swings from tear−jerking moments to knee−slapping jokes from Newfoundland residents overwhelmed with the task of handling an influx of visitors.

One recurring subplot involves prejudice against Muslims. An Egyptian man is continually sidelined by frightened characters, rebuffed from helping with the cooking before he can explain he’s a world−class chef.

Some people made note of parallels with events unfolding outside the theatre.

Guests were arriving amid breaking news that a U.S. court ordered a halt on the president’s latest executive action freezing refugee processing and limiting travel from a handful of majority−Muslim countries. The president slammed the ruling as unprecedented judicial overreach.

Meanwhile, the theatre was filling up. The prime minister arrived at the midtown Manhattan venue in the same motorcade as Ivanka Trump. They rolled up to the theatre in separate vehicles, and quickly entered the building where they chatted with other guests.

It was their second event together in a month. Trudeau had a roundtable meeting with Ivanka at the White House when they created a women’s business group — one the president has since saluted by referencing in different high−profile settings, including his address to Congress.

One theatregoer and one U.S. interviewer raised Trudeau’s differences of opinion with the U.S. president on issues related to refugees and Islam.

Tom Brokaw interviewed the prime minister in an empty theatre. Afterward Trudeau mentioned he admired the NBC stalwart, who years ago did a piece saluting Canada and the people of Gander.

"I feel the same way," Brokaw replied. "You have a lot of fans in this country."

Ivanka Trump chatted with people who came up to her seat in the middle of the hall to get their picture taken. She also exchanged words with Foreign Affairs Minister Chrystia Freeland and her father’s ambassador to the United Nations, Nikki Haley.

There were up to 150 other UN ambassadors in the crowd — people Canada will spend the next few years lobbying in its effort for a temporary seat on the security council. There were also diplomats and politicians who were involved in the aftermath of the 9/11 attacks.

As he walked in, former prime minister Jean Chretien shared some memories about the tragic events that inspired the story being told on stage. Chretien says he and the minister of transport were made aware of Gander residents taking in thousands of passengers when U.S. air space was closed following the tragedy.

"We were involved in many things," Chretien said as he walked in. "It was quite a day."

Prior to its arrival on the Great White Way, the homegrown production had earned strong reviews as it criss−crossed the continent with shows in La Jolla, Calif., Washington, D.C., Seattle and Toronto.

"There were up to 150 other UN ambassadors in the crowd — people Canada will spend the next few years lobbying in its effort for a temporary seat on the security council." Canada is not lobbying anybody, nor is most of the population. A few elitist Beaurocrats and their ilk are lobbying for this seat, and the cost of the show they have been putting on to win favour will still not be paid off 50 years from now. Given the stupidity of the decisions being made in 2017, I doubt there will be much of a monetary system by then. Money seems irrelevant compared to intense heat, extreme weather, mega-fires, drought, starvation, and the rest of the bright future being put in place for future generations.