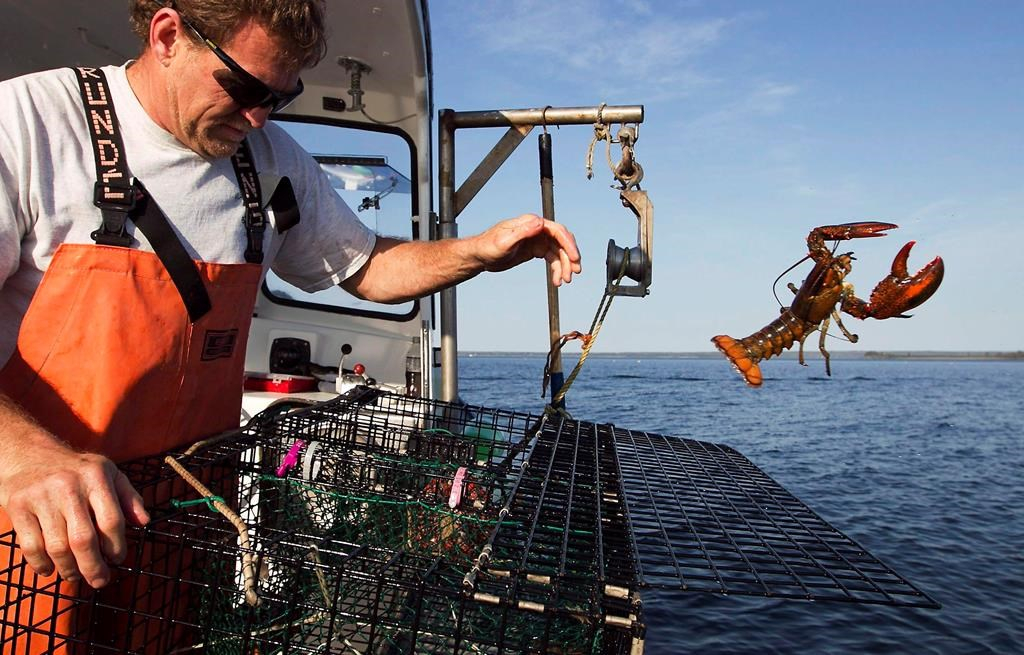 Undated file photo of a worker tossing a lobster from a trap. Photo by The Associated Press.
Previous story
Next story

Canada requires the least amount of information on its seafood labels when compared to the European Union and the United States, according to a new watchdog group report.

SeaChoice, a sustainable seafood program formed by a coalition of environmental groups, released a report March 16 that gave Canada an "F" grade for only requiring two out of six pieces of information it deems necessary for “well-labelled seafood."

The Canadian Food Inspection Agency (CFIA), which said it reviewed the SeaChoice report, said the wheels are already in motion for changes to the labelling system: its food labelling modernization proposals are consistent with SeaChoice's recommendations in several ways, it argued.

The agency also said it verifies that importers, processors and vendors are complying with regulatory demands, and cautioned that it requires all establishments in the country that process fish and seafood for export or for trade within Canada to register with them and develop quality-control programs.

But Canada doesn't currently require details like where and how the product was caught, according to the report, titled "Canadians Eating in the Dark: A Report Card of International Seafood Labelling Requirements."

The consequence, says SeaChoice, is that Canadians don’t have comprehensive information available to them if they want to determine the health quality or environmental sustainability of the product they’re about to buy, or if they want to make sure they aren’t buying products tied to human rights violations.

Although some sellers and retailers voluntarily add in more details to seafood labels, the report notes, there is a lack of "uniform" regulatory requirements, meaning Canadians are getting different information depending on where they purchase seafood.

“Canadians may be mistaking their seafood for something it’s not and unknowingly contributing to marine degradation or modern slavery,” reads a SeaChoice press release on the report.

“It’s about the basic right to know what we are eating,” said Bill Wareham, SeaChoice representative with the David Suzuki Foundation, according to the release. The foundation is one of the organizations behind the SeaChoice report, which also includes the Ecology Action Centre and the Living Oceans Society.

The program compared Canadian regulatory requirements to two top export destinations, the European Union and the United States. It graded the jurisdictions against six elements: the common name of the product; the scientific name of the species; production and harvest methods; geographic origin and country of last major transformation/processing.

For example, a common name could be “Rockfish,” the scientific name of which is Sebastes flavidus. The production method could state whether the fish was farmed or caught in the wild, and the harvest method could involve whether the catchers used, say, a trawling or dredging method, or in the case of farmed fish, perhaps a bag-and-rack system or a hatchery. Its geographic origin could include the region of the catch or, in the case of farming, the area it was produced.

Canada’s regulations only require two of these pieces of information, says SeaChoice: the common name, and the country of origin. The United States requires these as well as the production method, while the European Union requires all six pieces of information, with the only exception being the harvest method for farmed products, according to the report.

SeaChoice recommended amending Canada’s food labelling policy to include all six pieces of information, as well as creating another policy to put the “onus” on businesses in the seafood supply chain “to provide the necessary product information from source to customer.” That would help improve the traceability of products, the group said.

Asked for reaction, the CFIA said it is continually "evolving" to respond to an ever-changing food safety environment.

"It is important that our food labelling system takes into account national and international best practices and lessons learned to enhance confidence domestically and internationally," CFIA spokeswoman Lisa Murphy commented in an email.

"Although it is industry's responsibility to properly label seafood, the CFIA verifies that importers, processors and vendors are in compliance with regulatory requirements."

Murphy said SeaChoice's demands reflect proposals in its food labelling initiative that is aiming to develop a more modern system.

This includes a proposal for "enhanced company information" and a requirement for "all wholly imported food products to include 'Product of (naming the country)' information," which the CFIA says aims to prevent consumers from being misled.

Canada exported over $6.6 billion worth of fish and seafood in 2016, and imported $3.8 billion, says the Department of Fisheries and Oceans, and the industry employs over 72,000 people.

This is an interesting

This is an interesting article but hardly a surprise .Canada generally has week regulations of any at all. That’s because they are geared to keep costs down for suppliers regardless
of the effect it may have on the health of Canadian citizens .

I found the statement from CFIA that it verifies that proper labeling requirements are lacking in credibility.. She didn’t say specifically what was done to enforce those requirements. As pointed out in the article ,Canada standards are weaker than those of both the US and the EU. Historically, particularly during the Harper government, there were cutbacks to the CFIA and until the US threatened to ban the import of Canadian beef from a certain Canadian slaughterhouse, “verification” seemed to consist of reviewing reports prepared by the company itself. Actual field inspections were limited or nonexistent.

Frankly, this is consistent with most of Canada’s so-called regulation of other food products and indeed any products at all. They begin with voluntary “standards” and if there are many complaints the so-called standards become regulations but Canadian governments don’t provide adequate resources to actually enforce the regulations. This is a long tradition in Canada .for example, during the BSE crisis with cattle ,the government of the day refused to outlaw the use of animal protein in cattle feed. .That should have been a no-brainer. During the whole crisis the government and the opposition were worried about the effect on exports but hardly a word was said either in the political arena or the mainstream mediaabout about theC possibility of anadian citizens consuming bad food. In one instance where there were deaths, the Con minister joked about it as being “death by a thousand cold cuts “.

It is long past due for for Canadian governments to pass strict laws regarding labeling and quality. Furthermore, the labeling of products should be clear and in print that is somewhat larger than microscopic .