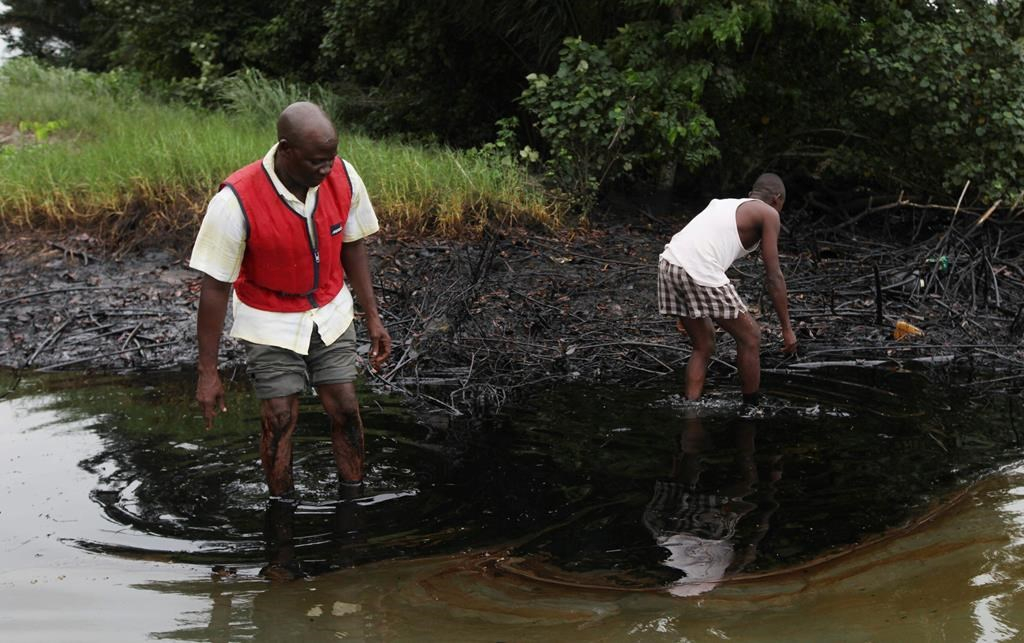 Men walk in an oil slick covering a creek near Bodo City in the oil-rich Niger Delta region of Nigeria. File photo by The Associated Press
Previous story
Next story

Royal Dutch Shell's Nigeria subsidiary "fiercely opposed" environmental testing and is concealing data showing thousands of Nigerians are exposed to health hazards from a stalled cleanup of the worst oil spills in the West African nation's history, according to a German geologist contracted by the Dutch-British multinational.

The people of Bodo in the oil-producing southern Niger Delta should get urgent medical tests, Holtzmann wrote in the letter dated Jan. 26 and seen by The Associated Press.

Shell did not immediately respond to requests for comment.

The cleanup halted 17 months ago was part of a British out-of-court settlement in which Shell paid $83.5 million to 15,600 fishermen and farmers for damages from two oil spills caused by old pipelines in 2008 and 2009 that devastated thousands of hectares of mangroves and creeks. Lawyers alleged 500,000 barrels of oil spilled. Shell said it was only 1,640 barrels and initially offered the community $50,000 in compensation.

The agreement was reached through British law firm Leigh Day, which said Friday it has received no response to a Jan. 30 letter to Shell asking for the data from Holtzmann, who was hired by Shell to manage the cleanup.

"Leigh Day has been pushing for the cleanup of Bodo, health screening of the population and testing of the water supply since 2011 - all to no avail," it said. "This letter shows that even those who were employed by Shell are deeply concerned by their behaviour and their lack of transparency."

Holtzmann's letter warns that children bathing in creeks are in danger of harm from toxic substances, as are people who drink from hand-dug wells.

Amnesty International called Shell "deeply irresponsible ... Shell has a responsibility to share this information with the community to ensure they can take steps to protect themselves and their children," a statement from the rights group said.

Cleanup efforts overseen by the Dutch government began in June 2015 but were halted within months by community disputes and problems with contractors.

Holtzmann's letter urges Bodo Mediation Initiative co-chair Inemo Samiama to publish the data, noting that the initiative's committee had insisted on the tests "against fierce opposition from SPDC." Shell Petroleum Development Co. is the subsidiary in which Nigeria's government is the majority shareholder. The country is one of Africa's largest oil producers.

The environmental tests were carried out in August 2015 with support from Shell's headquarters in The Hague, the letter said.

Holtzmann said his intent to publish the findings in a scientific magazine last year was quashed by Shell, which said his contract did not permit publication.

Samiama said in a telephone interview that residents' health will be better served by getting on with the cleanup. After a challenging four-year process, "we are on the verge of getting contractors back to the site," he said.

Bodo is part of Ogoniland, where the failure to clean up oil spills was called an environmental scandal in 2011 by the U.N. Environment Program. It reported contamination levels so high it could take 30 years to renew the land.