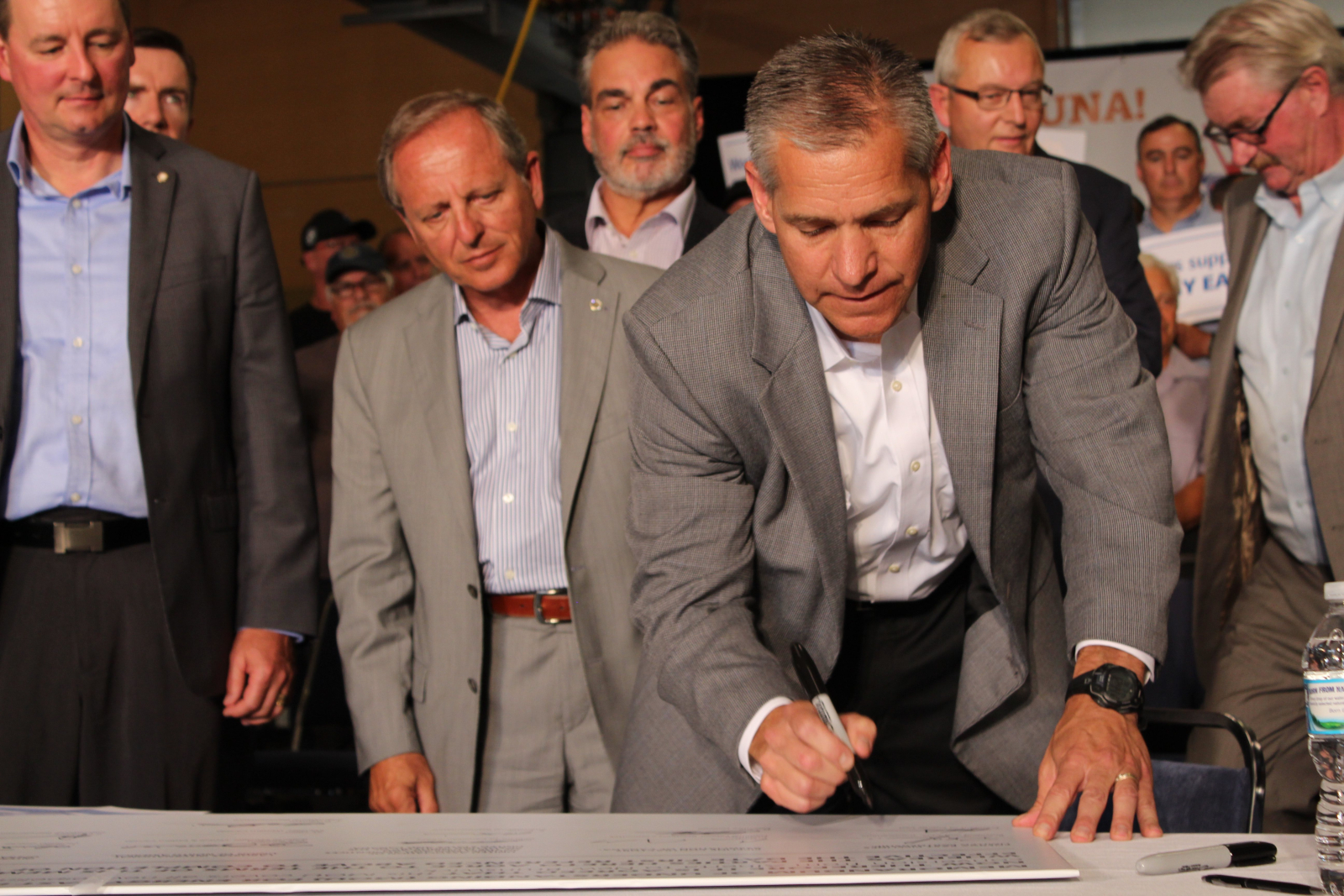 The president made the announcement at the White House.

He was accompanied by the president of TransCanada Corp., the Calgary-based pipeline company that has wrestled with lawsuits, resistant landowners, protesters and Washington Democrats.

"You've been waiting for a long, long time," Trump said to TransCanada's Russ Girling. "It's a great day for American jobs and a historic moment for North America and energy independence."

Prime Minister Justin Trudeau saluted the news: "We're very pleased with the announcement coming out of the United States," he said, welcoming indications the project would be spared from upcoming Buy American rules.

The presidential approval doesn't guarantee the pipeline gets built.

The removal of one big obstacle in Washington still leaves several sprinkled around the American Midwest, where opponents still hope to trip up the project with protests and lawsuits.

The likely epicentre of the coming battle is Nebraska, the very place where opposition to Keystone began years ago. TransCanada must still reach deals with some landowners there, it lacks a state permit and faces possible court challenges there and in South Dakota.

The markets demonstrated their skepticism by yawning at Friday's news: TransCanada's share price barely budged, and in fact even declined a bit by late-afternoon, retaining a value similar to October before Trump was elected.

Keystone opponents swiftly linked their cause to the broader anti-Trump movement.

"This isn't game over, it's game on," Stephen Kretzmann, executive director of Oil Change International, said in a statement that insulted Trump.

"Now we have a president who is deeply beholden to the oil industry and will do anything they ask, so this approval is no surprise. . . . Put your tiny hands in the air, Trump, and back away from the climate."

Trump, meanwhile, has been eager to talk about projects like Keystone.

His young presidency has been consumed by problematic issues lately: a failed health reform and Russian election-meddling. Even as he made the Keystone announcement, reporters in the Oval Office shouted questions about the collapse of his health bill. At that same moment, networks were carrying a congressional committee announcement that Trump's former campaign manager would be questioned in its Russia probe.

Trump says he wants to move onto jobs and the economy.

Keystone XL would mean thousands of temporary construction jobs and a permanent, annual boost in tax revenues for communities along the route, which would stretch from Canada to an already completed southern portion now pumping oil to refineries on the Gulf of Mexico.

It's unclear if construction could start this year.

The Nebraska permit alone could take up to eight months, said Canada's Natural Resources Minister Jim Carr. He welcomed the U.S. announcement, but pointed out the process is far from over.

"We in Canada know that pipeline decisions can be controversial," Carr told reporters in Ottawa. "(But) you would assume that these approvals would lead to a completed pipeline project."

He declined to say whether a completed Keystone would enter the calculus of whether the country needs another, larger project from TransCanada. Carr said the Energy East plan to move oil to the Atlantic Coast is undergoing an independent review.

U.S. regulators conducted their own, favourable reviews before politicians stepped in.

American government studies concluded that the pipeline would have negligible impact on the environment — and potentially even a beneficial one, as a cleaner alternative to oil transport by rail.

But opponents disputed the conclusion.

They pointed to the worst-case scenario calculated by U.S. regulators, and argued that it's actually becoming reality — that if oil prices remain low, and no other pipelines get built, Alberta oilsands expansion would slow, and emissions would drop, without Keystone.

Hearing this pressure from the political left, Barack Obama rejected the project.

In response, TransCanada filed a challenge under Chapter 11 of the North American Free Trade Agreement, alleging the U.S. government breached its legal commitments under NAFTA. That challenge has been dropped, TransCanada said Friday.

Republicans had repeatedly promised to reverse Obama's decision. That included Trump, who had often discussed the Keystone approval as a fait accompli, telegraphing intentions that the market received long ago.

"We believe that the receipt of the presidential permit was expected by the market," RBC Capital Markets said in a note to clients. "We note that KXL is not included in our valuation for the stock and if the project moves forward, we view that as upside."