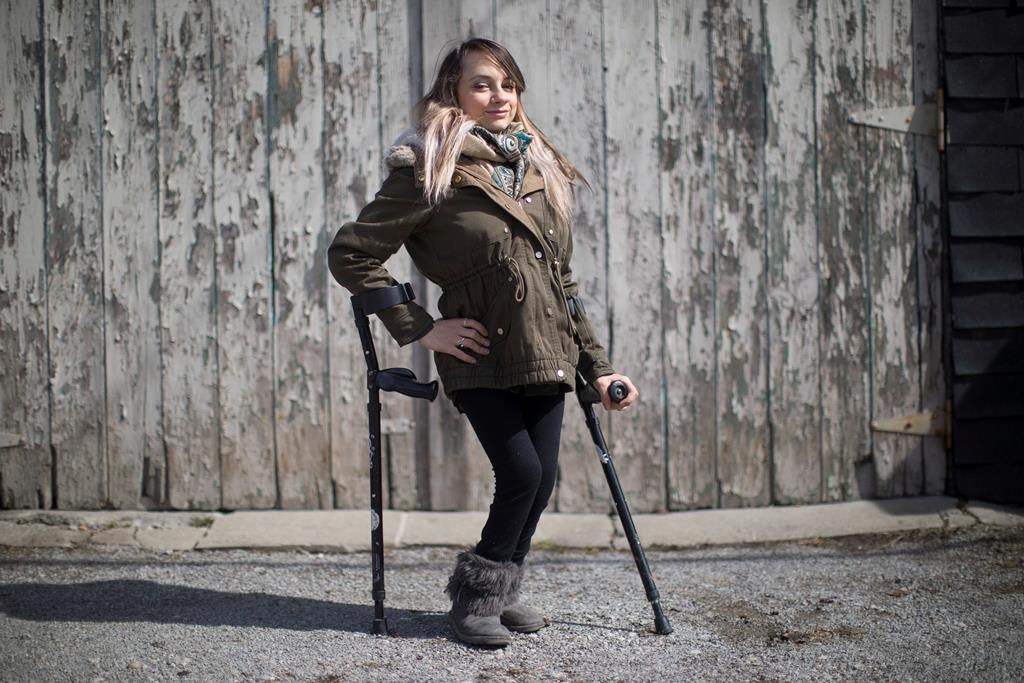 Haily Butler-Henderson is photographed near her Toronto home on Friday March 17, 2017. Photo by The Canadian Press
Previous story
Next story

A Toronto woman has launched a human rights complaint against a bar that allegedly refused to allow her to use their washroom on the grounds that she might sue the facility if she injured herself.

Haily Butler-Henderson, who suffers from spina bifida and uses forearm crutches as a mobility aid, says the incident played out at Pentagram Bar and Grill in the city's east end.

She says she requested permission to use the facility's only washroom located in the basement, but was told she could not in case she injured herself and opted to sue the restaurant.

She says amid repeated requests, a waitress at one point physically barred her access to the stairs.

Even though bar staff eventually relented and she used the washroom, Butler-Henderson said the incident infringed upon a basic human right that she feels the need to fight for.

Pentagram did not respond to a request for comment, and Butler-Henderson's claims in her complaint to the Human Rights Tribunal of Ontario have not yet proceeded to a hearing.

The 24-year-old woman said her experience left her feeling frustrated.

"I was definitely being denied dignity and I was definitely embarrassed," Butler-Henderson said in a telephone interview. "Having somebody yell in your face about your disability and whether or not you can use the bathroom is never really a pleasant experience."

The alleged incident took place on Aug. 19 last year as Butler-Henderson was waiting for friends at a nearby coffee shop.

Lengthy lineups for the washroom there prompted her to move down the block to Pentagram, where she asked the waitress permission to use the facilities as she was not a paying customer, she said.

After five efforts, and a reminder from Butler-Henderson that the restaurant had no legal grounds to bar her from the washroom, she alleges the staff member made the issue public for everyone in the restaurant at the time.

"She said, 'well, everybody in this bar is my witness that I told you not to go down the stairs in case you fall,'" Butler-Henderson said, describing the moment as humiliating.

At the crux of Butler-Henderson's human rights complaint is the notion that people with disabilities have the right to assume a certain amount of risk for themselves.

Butler-Henderson, who has been using this type of crutch since the age of six, said it was not the staff member's place to assess her ability to navigate the stairwell based solely on the fact that she has a disability and relies on a mobility aid.

Another key focus of Butler-Henderson's complaint is the notion of washroom access as a fundamental human right essential for functioning in society.

In tackling the issue, some observers say Butler-Henderson is treading ground previously covered by past social justice crusaders.

Sheila Cavanagh, professor of gender studies at York University and author of the book "Queering Bathrooms," said washrooms have served as battle grounds for activists fighting for everything from racial desegregation to LGBTQ equality.

She said washrooms have historically been places where people try to exclude those who do not conform with what prevails as mainstream at the time, adding disability rights may be the next to be hashed out on this long-standing battle ground.

"When there is some kind of prejudice or anxiety about a group of people, stated or not, it tends to manifest itself in the bathroom," Cavanagh said.

"People like to think that they're supportive of people with visible physical disabilities, but what we find is the lack of comfort manifests itself in an unwillingness to make these spaces user-friendly. And certainly there's a lot of anxiety about being in a bathroom with people who might actually need your help to use that room."

Butler-Henderson said she hopes her complaint will lead to more rigorous standards around washroom accessibility and a deeper understanding of how important the issue can be for those who cannot take it for granted.

"To find oneself in a situation where you are unable to relieve yourself without breaking the social conventions that surround the act itself is a denial of the right to participate in social life with dignity," reads an excerpt from her complaint. "As a person with a disability, I must carefully plan where I shop, work, and socialize around access to restrooms."

Pentagram has not yet responded to the complaint.